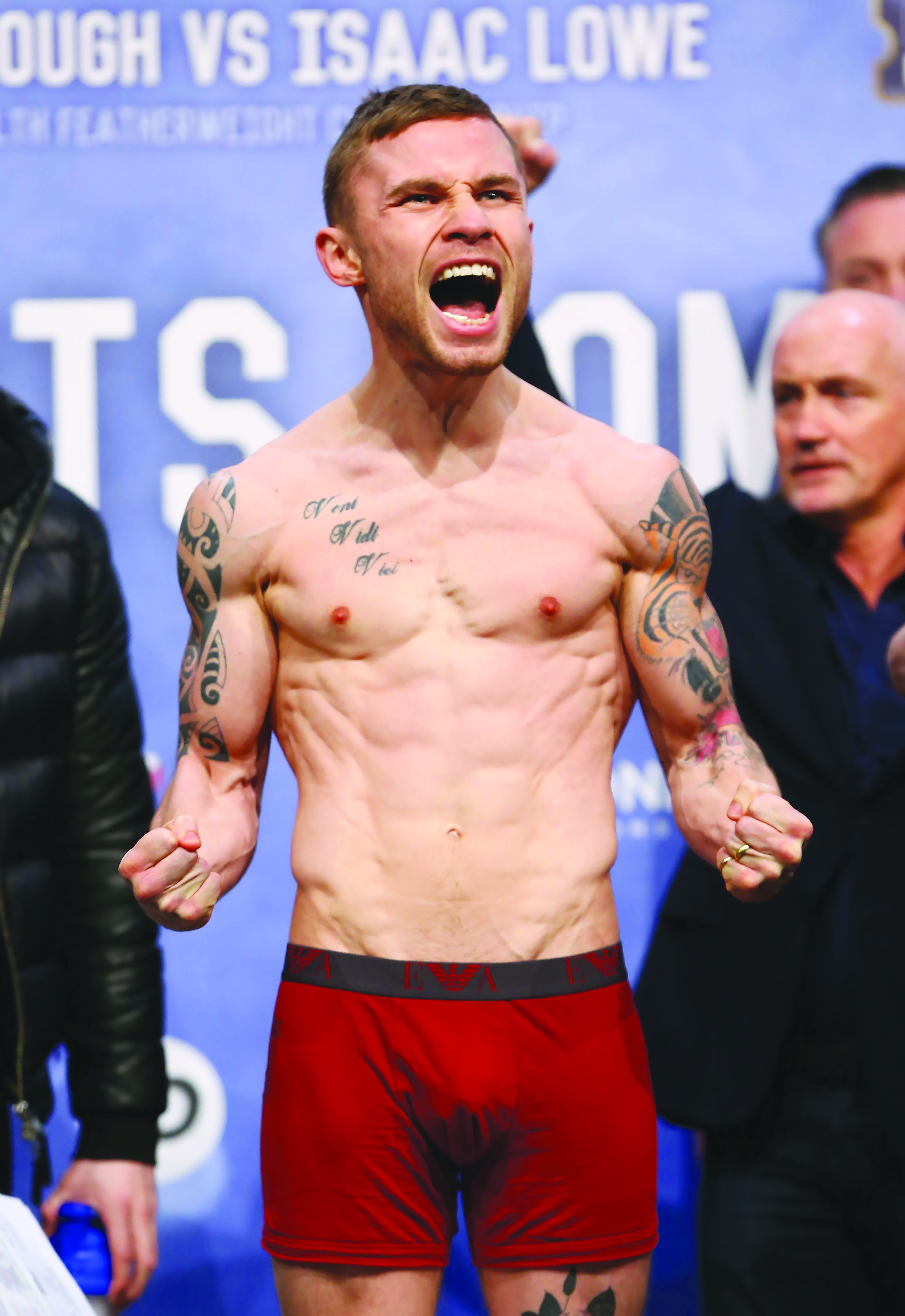 CARL Frampton’s boxing career has been nothing short of remarkable, but on Saturday night at the Barclays Centre in Brooklyn, New York, it could reach dizzying new heights.

Back in February, ‘The Jackal’ became the first Irish boxer to unify titles when taking Scott Quigg’s WBA super-bantamweight title to add to his IBF strap and this weekend, he bids to become only the second Irish boxer after Steve Collins – and first from the North – to become a two-weight world champion when he challenges Leo Santa Cruz for the WBA featherweight title.

The long-awaited showdown with Quigg didn’t quite live up to expectation with the Bury man’s reluctance to engage for over half of their meeting contributing to his own downfall and the fight as a spectacle, but this will certainly not be the case against the California-based Mexican this weekend.

The defending champion (32-0-1) goes by the alias ‘El Terremoto’ which translates as ‘earthquake’ but perhaps a more fitting moniker would be ‘the hurricane’ given his incredible output and energy levels that will prove Frampton’s biggest problem. The 27 year-old champion averages a quite remarkable 85 punches per round and applies non-stop pressure from first bell to last.

Frampton must solve this riddle and find a way to make Santa Cruz think twice and force him into a ‘Plan B’ he hasn’t really needed in his 33-fight career. Throw in the step-up from super-bantamweight to featherweight and this fight undoubtedly represents the biggest test in the Belfast man’s perfect 22 fight career. But it is far from mission impossible.

Frampton had simply outgrown the 122lb division and this looked to manifest itself with his energy levels dipping in recent bouts while his power also seemed to have waned slightly (although ask Scott Quigg whose jaw was broken when the pair clashed) in his last couple of fights. Not having to lose those extra 4lbs will make the world of difference when it comes to fitness and strength.

A relaxed Frampton is convinced it will tell on the night. “I don’t think people have seen the best of me and I think Santa Cruz will bring out the best in me,” insists Frampton who has been in New York with trainer, Shane McGuigan and his team since the start of the month to finish his camp and acclimatise.

“I have had big guys that throw a lot of punches in to spar me. They have come in to push me back and replicate Santa Cruz’s style. We have done everything we can to replicate that as much as possible.

“He’s tough and he comes forward, but let’s see how tough he is when he starts getting hit and getting hit hard. “I don’t believe he has fought someone who can punch as hard as me yet and I don’t think he will be as eager to come forward.”

Santa Cruz holds sizable height (three inch) and reach (seven inch) advantage over Frampton. However, this is almost identical to the advantages Quigg held over Frampton with the Bury man half an inch taller than Santa Cruz and past opponent, Chris Avalos also held similar advantages.

Against Quigg and Avalos, height and reach mattered not. Frampton is confident they won’t again. “He is a few inches taller than me but look, I’m used to that. I’m a short guy and I’m used to fighting people who are taller than me,” Frampton pointed out. “If I’m being honest, I prefer them a little bit taller, so Santa Cruz is the perfect height for me.”

It is also the perfect fight according to ‘The Jackal’ who has been consistent in saying he wants to leave the sport around the age of 33 or 34. The move up to featherweight was something discussed after his US debut last summer when another tall and proud Mexican, Alejandro Gonzalez Jnr dropped him twice in the opening round of their meeting in EL Paso before Frampton recovered to win a wide points decision.

He of course hung around for the Quigg fight, but the lure of stepping up to face Santa Cruz – who he was once mandatory for when the Mexican campaigned at super-bantam – was too good to turn down. Frampton is now in the big time and this is where he wants to stay for the remainder of his career.

“I said I wouldn’t move up to 126 unless it was a big fight and Santa Cruz is a huge fight,” he agreed. “I didn’t want to hang around and fight eliminators, I wanted to go straight into the deep end and fight the top guys. This is the fight I have been looking at.

“I wanted him when he was the WBC champ at 122 (super-bantamweight). “The fight didn’t happen but now it’s here. The fans are backing me. I know I’m going into this fight as the underdog but I relish that and I believe you are going to see the best in me.

“Barry (McGuigan) and the guys see it in the gym every day, but it hasn’t come out on fight night. Maybe that’s been to do with making 122, but at 126 I’m a different animal. “I want them all to be like this, big fights on the big stage where people are talking about them. Santa Cruz is definitely that – what a fighter, I’m up for it.”

While Santa Cruz poses the biggest test of Frampton’s career, the reverse is also true. While the Mexican despatched common opponent, Kiko Martinez in five rounds last time out, his biggest win came in his previous bout when out-pointing Mexican rival, Abner Mares.

Billed as ‘The Battle of LA’, the one-time sparring partners served up a classic with Mares coming out firing, but Santa Cruz proved his worth and more importantly, his chin, when weathering the early storm before going on to dominate. Mares certainly asked questions of the three-weight champion, but perhaps played into his hands by marching forward and trying to fight fire with fire.

Movement and counter-punching will be key and they are Frampton’s biggest attributes. He must get out of the line of fire because Santa Cruz throws frequently and accurately, but is also there to be hit and hit hard which could be telling, especially early.

The North Belfast man must get in and out of range quickly, take advantage of Santa Cruz’s basic footwork and move to the side. This ought to give him angles and chances to counter and with the extra 4lbs, counter hard.

“I need to be equally as fit as him and the move to featherweight will help me with that,” he explained. “I don’t think he has been hit as hard as I can punch. Mares can punch a bit, but I believe I am a harder puncher than Mares and I believe that once I start nailing him, the punch output will drop. He won’t be as gung ho as he won’t want to be countered.

“It may be a different fight than normal (for him), but I do believe he is a proud Mexican warrior that will come and have a go, but he will give me a chance to nail him and hit him hard.”

There are questions to be answered across the board on Saturday, but Frampton has the ring smarts even though he will need the performance of his life to get the win. This is a step into the unknown for Belfast’s favourite son, but he may just have the answers and show that it isn’t as some fear, a ‘Brooklyn Bridge’ too far.