From Detroit to North Belfast, how a big name does a big job 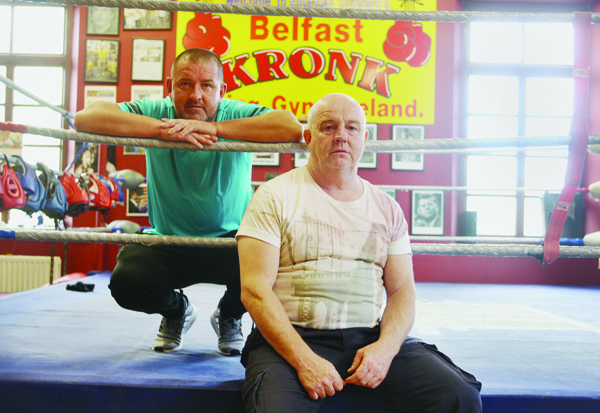 COACHING: Paddy Saunders and Tony Dunlop in the Kronk Boxing Gym, which is continuing to do great work with young fighters

TO say the name Kronk Boxing Gym is iconic in the sport would be an understatement. Located in Detroit and once led by trainer Emanuel Steward, the name is a household word in the sport of boxing.
But North Belfast has its a Kronk Boxing Gym, located in the Duncairn Centre on Duncairn Avenue.
Formed as Belfast ABC over 23 years ago by Bobby McAllister, one of the best coaches in Ireland at the time, the club has come a long way since.
In December 2005, former secretary of the gym, Damien McCann, played a pivotal role in Limerick boxer Andy Lee turning pro. He then negotiated a lucrative financial management agreement for Lee to turn professional with Emanuel Steward from the world renowned Detroit Kronk Boxing Gym
Lee was Ireland’s rising amateur boxing star and when he beat USA champion, Jesus Gonzales in the semi-finals of the World Junior Championship, a new relationship between Steward and Kronk in Detroit was born with Belfast ABC gym, hence its name today, Kronk ABC Belfast.
Past professional coach Tony Dunlop has been a key figure throughout the history of Kronk ABC Belfast and spoke about the club’s illustrious time.
“This place started over 23 years ago when Bobby McAllister walked past the building which was derelict at the time and thought it would be perfect place for a boxing gym,” he explained.
“He asked people in the community who were very positive and said that it would be great for young people in the area.
“After a period of time, a lot of kids came through the doors. Ryan Burnettt and Paddy Barnes both started off here.
“Burnett was groomed from his early days in here to become a superstar. He left here at 37 fights undefeated and was one of the best in the world at just 13 years old.
“The turning point I suppose was when Emanuel Steward from Kronk gym in Detroit, which is the best gym in the history of boxing, got in touch.
“He saw some of the work we were doing and Belfast Kronk Boxing Gym was born – the rest is history as they say.
“We have continued to bring through a lot of champions including professionals James Tennyson and Daniel McShane.
“Tommy McCarthy is also here now fighting professional.”
Today, the club is going from strength to strength under the stewardship of a new breed of coaches in the shape of Paddy Saunders and Martin McCullough.
The duo have embarked on a new programme of coaching young people from North Belfast with the aim of using boxing to their benefit.
Tony added: “Paddy Saunders and Martin McCullough are both fantastic coaches. They are flying the flag for Belfast Kronk Gym today.
“They have started off a new programme with the youth of the area. They are both giving it a million per cent. I’ve never seen two coaches work as hard. Kronk Gym could not be in better hands.”
Classes for 8- to 10-year-olds take place every Monday, Wednesday and Friday from 5.30pm to 6.15pm with classes for 11 years and older from 6.30pm to 8pm on the same days.
Paddy Saunders explained: “Many of the kids have behavioural problems and some suffer from autism.
“These classes are an outlet and something to focus and concentrate on.
“It is not all about boxing but something for them to do. They don’t miss classes.
“If we get a few champions out of it, then brilliant, but it is for the kids.
“Most boxing clubs don’t take kids at eight years old, but we do.
“All the kids start off exercising and running about the big hall before they come into the boxing gym itself.
“They are putting their energy into something positive instead of being on the street and engaging in vandalism and anti-social behaviour. I believe there is a bright future for boxing in North Belfast. We have a top-class facility and there are a lot of good kids in here.”
To find out more about the club and to get involved, check out the new Kronk ABC Belfast Facebook page.