From street busker to Empire headliner 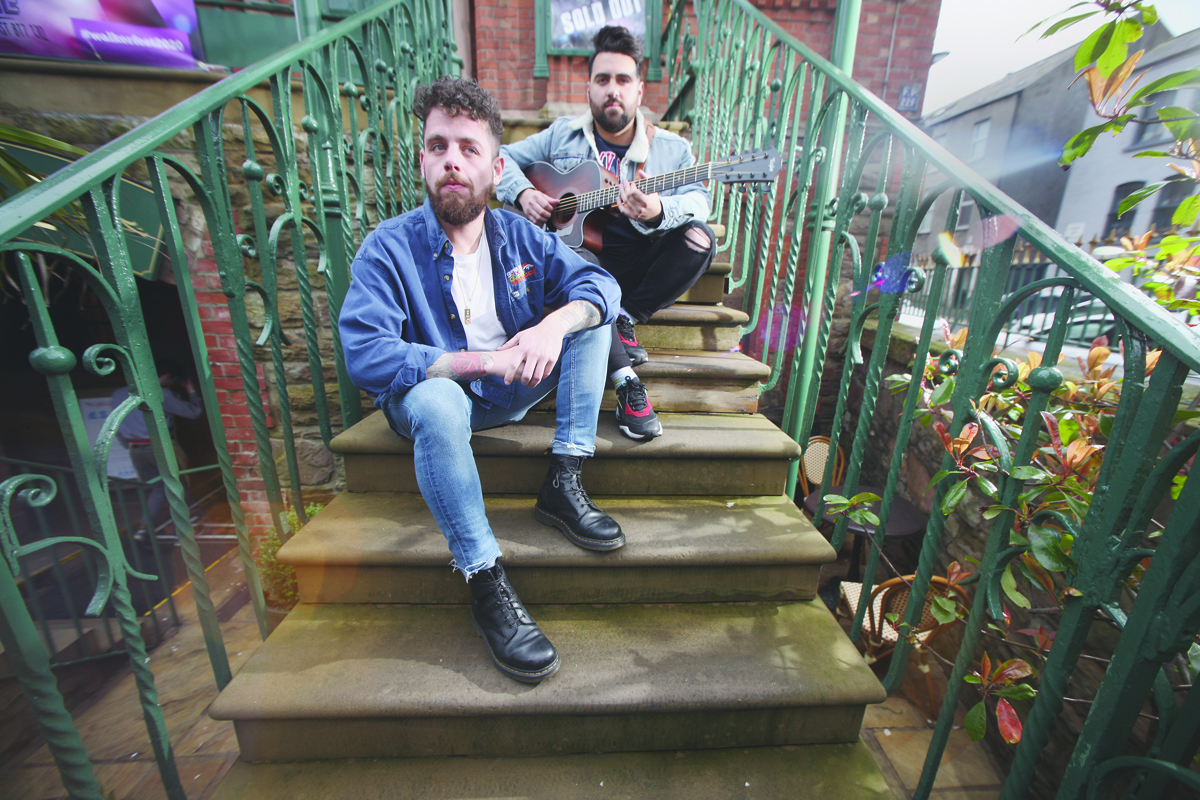 FRESH TALENT: John Garrity with Jonathan Cariaga at the Empire, where the talented duo will be playing on March 8

JOHN Garrity is a familiar face to many around Belfast city centre, entertaining shoppers with his on-street busking.
Originally from Enniskillen, the 28-year-old has made Belfast his home ever since returning from a spell in America and next month is set to headline a gig in the Empire with companion Jonathan Cariaga in a duo known as the 2 Johnatones.
John, who has had a lifelong passion for music, decided he wanted to have a shot at making a living from it.
“When I left school, I was doing my best to focus on music. It was mostly country back then but now, it is totally different,” he explained.
“The country scene isn’t as big so I have been out broadening my style and have started to write my own material.
“Busking has been good for me and that is where people recognise me from. It was a bit of luck in that I bit the bullet and went out and did it.
“It is great when people come up and ask for a photo which is all a bit surreal and new to me but I am enjoying it.”
John hit the headlines in July last year after coming under attack when singing the ballad Grace in Donegall Place. He was verbally abused by a mystery woman, who went on to kick over his equipment. Footage of the incident went viral on social media, with John receiving widespread support at the time. He bounced back from the incident and says it hasn’t deterred him from singing the love song about Joseph Plunkett and Grace Gifford.
“I think it was just bad timing. I picked myself up and moved on quickly enough.
“I don’t see Grace as a republican song. For me, it is very much a love song. People can have their own judgement on it but I love it and that one-off incident won’t stop me from keeping singing it.”
John received publicity of a more positive note earlier this year when he caught the attention of Irish band Kodaline following his stunning performance of their song ‘All I Want’.
The viral rendition also caught the attention of the band's lead singer, Steve Garrigan, who wants John to join the band on stage at their next Belfast gig.
John is enjoying unprecedented popularity thanks to his internet fame and is now doing more gigs than busking.
In his biggest ever gig in Belfast, John, who previously appeared on the hit TV show Britain’s Got Talent, will take to the stage of the Empire Hall in Botanic Avenue on Sunday, March 8 for his biggest show to date.
Looking ahead to the gig, an excited John said: “Things are good at the minute and we seem to be doing really well. We have been working hard and the style of our play is starting to take shape.
“We are very excited about our first big gig in the Empire. Tickets have been flying out and there are only a few left at this stage.
“It is going to be a big night and we are expecting a big crowd.
“This is will be the biggest gig we have ever had and hopefully won’t be the last.
“I would encourage people to buy a ticket and come along. It is going to be a lot different to if you have heard me on the streets or in the bars.”
John’s sidekick Jonathan Cariaga (32) is originally from Argentina and has now made Belfast his home after teaming up with him.
“I wanted to study music at university in Dublin and planned to only stay in Belfast a few months,” he told us. “I got some work gigging and have been here over three years now.
“I was playing around bars in the city centre and got in contact with John. We met on a Thursday and by Sunday, we were playing together. We really enjoyed doing it together and haven’t looked back since.
“It is really fun working with John. He is a really free and open singer so we can play whatever we want all the time.
“I am so excited about the gig in the Empire. I really like the place and always wanted to play there.”
John Garrity live in concert at the Belfast Empire is on Sunday, March 8. Doors open at 8pm. Tickets are priced at £14.06 and are available online at www.eventbrite.co.uk