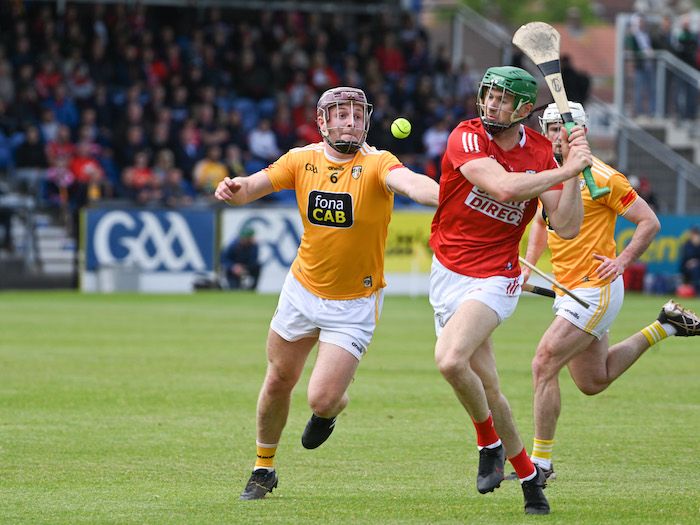 Darren Gleeson has said he will take some time out and have a discussion with the Antrim county board as to whether he will return to the Saffron hot-seat in 2023.

The Tipperary native's three-year term ended with Saturday's defeat to Cork, but it would be a major shock if there were any objections to extend that tenure given what the Portroe man has achieved: guiding Antrim into Division One in the League and keeping them there for what will be a third season in 2023; Joe McDonagh Cup success in 2020 and this year, that will also see Antrim compete in the Leinster Senior Hurling Championship next year.

While 11 points was the margin of defeat on Saturday, it was hugely unflattering to Antrim's efforts who were right in this game until stoppage time, although Cork had taken a grip of things in the second period.

Such a performance was down to the work Gleeson and his players have put in over the past three years and there will be few if any in the county who don't want that to continue.

"This isn't the time or place for that reflection," he said after.

"I see what's here in Antrim, so there is nothing that should stand in the way of that. You take time, have to see what the wishes of the (county) board are. I was given three-year tenure, so we'll sit down and see what's wanted.

"You always have to think about what's at home as well. We've three young kids going up to the field themselves and it's nice to be there for those moments, but we'll see."

Prior to the weekend's preliminary quarter-finals, the GAA held a media launch for the rest of the All-Ireland Senior Hurling Championship, but McDonagh finalists Antrim and Kerry were snubbed which drew the ire of fans in both countries who felt their teams had been disrespected.

The official line was that both teams had a press day ahead of their McDonagh final last week, but Gleeson - who was unaware of the press call until Friday when shown a photo of the event - was quick to point out his team were still in the race for Liam and should have been respected as such.

"That's what they said but I thought they were two different competitions," he replied.

"I wasn't aware of it and we got no communication. After the Joe McDonagh final last week, there were eight teams left in the Championship and for the dignity of the counties and what they are trying to do to progress to the next level, I thought they should have been invited. I think it's a very straightforward case.

"This was a Liam MacCarthy preliminary quarter-final today, so make what you want out of that."

Gleeson has been consistent in his calls for Antrim hurling people to fully get behind the team and between last weekend's final in Croke Park and Saturday's sold-out Corrigan Park, the message has been heeded.

Attendances at county finals have always been huge, but the county side rarely enjoyed anything like the same numbers. Those who have filed through the turnstiles in recent weeks will surely be back for more as this group have made huge strides and with some glamour home games next year in League and Championship, the backing the team have brought can help drive the county forward with a renewed pride in the saffron jersey.

"We played a high-intensity game at Croke Park last week and probably felt it in our legs there today and I'd say the players were a bit nervous as this is the biggest crowd they've ever played in front of in Corrigan Park, which is a plus," said the Antrim boss.

"But they'd need to be playing in front of that crowd all the time as there's no reason why the Antrim people shouldn't get behind that team.

"They have Leinster Championship matches here next year and Division One. You'll have Kilkenny, Wexford, all those teams in town, so get into the car and get up the road."

At the outset of the year, the goals would have surely been to consolidate in Division One and win the Joe McDonagh Cup.

Antrim did just that and Saturday's hugely positive showing against last year's All-Ireland finalists has proven just where this group of players are at.

The McDonagh Cup win over Kerry was rightly celebrated as these players have experienced enough long, quiet journeys home over the years and while they would have dearly loved to have kept the show on the road for another week, it wasn't to be.

"You couldn't be anything but proud of what they brought," Gleeson stressed.

"They will be hard on themselves so they will be looking at it as an opportunity missed as everything fell into our favour there today, but we just didn't make it count the way we could have.

"One of our goals at the start of the year was to bring the Joe McDonagh Cup back. We celebrated and came back in on the Monday night, but it's hard to get yourself fully going again. They made a huge effort and you say that with lads just tying up there at the end.

"How Eoghan Campbell came back from the injury he had last Saturday when hobbling around the place, yet kept going to the end there was great."

It's a mark of the progress made that they will feel disappointed in defeat against Cork.

Mistakes were made on the day with 10 first-half wides when on top not helping, as were some unforced errors at the other end that get ruthlessly punished at the elite level.

But consistent exposure and competition at this level is the only way to make those improvements and Gleeson is confident his players will do just that.

"We needed something to ignite and get the crowd behind us there," he said of their shaky start to the game.

"The crowd was behind us when we got scores but we just needed more intensity, more work rate to bring the place to life. We had opportunities to score and 2-6 we gave to Cork with handling errors. That's the difference and the step-up in standard, but there's only one way the lads are going to improve is by playing at that level the whole time.

"We have 31 amazing players in there who gave so much and they want to improve. When you have people like that on your side, they will do everything they can and it's a good platform to build on."