Get set for some Celebration with Thikriyaat 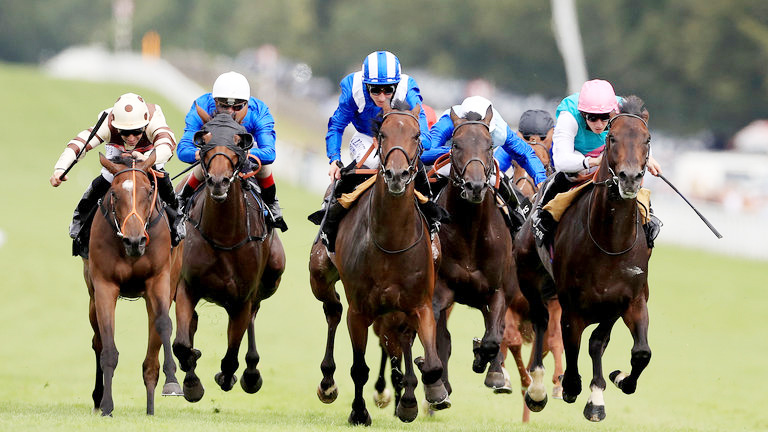 WEEKEND RACING BANKER: The vastly improving Thikriyaat looks the one for us in the Celebration Mile and is 7/4 with Sean Graham for the feature race at Goodwood on Saturday

WEEKEND RACING
We start with the weekend racing and first port of call is Goodwood for the Group 2 Doom Bar Celebration Mile and a classy looking field go to post for this one.
The improving Michael Stoute trained Thikriyaat is the 7/4  favourite with Sean Graham and has been beaten only once in four starts this season by Ribchester at Royal Ascot, so could be a cut above this field with Zonderland the obvious danger.
Beverley host their big race of the season with the listed totescoop6 Beverley Bullet Sprint Stakes and again, there is a classy looking field of sprinters going to post for this one.
Muthmir (11/4) looks the one in this and can get his season up and running at last after cracking efforts at York and Goodwood, so can strike for the Willie Haggas yard.
Windsor host a cracking evening card on Saturday. The Group 3 Winter Hill Stakes could see Ulysses looks solid bet while Berkshire could strike in the listed August Stakes.
We have the Tote Irish Cambridgeshire at the Curragh on Saturday. As usual, it’s a lottery of a race with English raider, Dream Walker leading the Sean Graham betting list at 8/1 midweek, but we are siding with David Wachman’s Boherbuoy at 10/1 to give his dismal season a boost.
PG QUAD
On to the weekend soccer and we start with the quad.
We are hoping for the full house after Arsenal let us down in the late kick-off last week, but fair play to the wily punters who got the 9/1 afternoon treble up.
We start in the Championship and Aston Villa (15/8) have started brightly, spent a few pounds wisely in recent days and can grab all points at Ashton Gate when they tackle Bristol City.
Leyton Orient (1/1) have started well in League 2 and can bank another three points at home to Mansfield while Crawley (9/5) could go top if they can get the better of Notts County.
Three-in-the-bag hopefully and few pounds banked for some afternoon players as we head to St James’ Park for the late kick-off and we are taking Newcastle (11/10) to take all points from unbeaten Brighton.
PG GOALRUSH
We went backwards last week after a solid start so lets’s hope we can step up this week and we suggest both teams to score in the following games: Blackburn v Fulham, Nottingham Forest v Leeds, Charlton v Bolton, MK Dons v Peterborough, Cheltenham v Crewe and finishing with the Wycombe v Colchester battle.
PG ACCA
On to the odds-on acca and we’re hoping Everton (8/13) can follow up that win at West Brom with a win over Stoke at Goodison and champions Leicester (3/4) can gain their first win of the season against Swansea.
Bradford (3/4) have had a great start to the season and can take maximum points against Oldham, while Doncaster (8/11) can maintain their good start with a home win against Yeovil.
We head to the Scottish Championship to make up the odds-on acca and Dundee Utd (8/11) catch the eye at home to Raith.
PG DRAW TRIXIE
Yet another 12/1 double was banked last week in the draw trixie bet - a full house would be most welcome this weekend.
We suggest you sit on the fence and take draws in the following games: Spurs v Liverpool (12.30), Swindon v Bristol Rovers (1.30) and finishing with the Charlton v Bolton game at The Valley.
We will be online daily on our popular Facebook/Twitter feeds with more selections, market movers, banter and some cracking bet competitions sponsored by local layer Sean Graham.