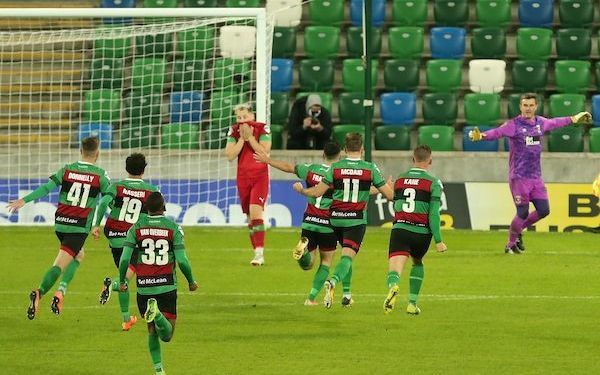 ELLIOTT Morris was the hero for Glentoran on Monday evening as he make crucial shootout saves to see his side emerge victorious over Cliftonville 7-6 on penalties after an evening of high drama at Windsor Park in the Irish Cup semi-final.

An own-goal from Paddy McClean had given the Reds an early lead just after the quarter-hour mark but Robbie McDaid replied for Glentoran before the break.

Neither side could force the winner in the second period and extra-time also failed to separate the duo as a shoot-out was required.

Ryan Curran was first to miss but Richard Brush saved from Keith Cowan and Elvio Van Overbeek to leave the Reds on the brink, only for Conor McMenamin to spurn the opportunity of victory as the shoot-out headed for sudden death.

The next six penalties were equally converted but the pressure eventually told on Conor McDermott whose penalty was saved by Elliott Morris after Marcus Kane converted the Glens' seventh kick.

Much of the pre-match team news centred on the availability of Reds' centre-back duo Garry Breen and Jamie Harney. Having failed in their original appeal the decision was overturned at an arbitration on Sunday and duo was available.

However, Garry Breen was the only one to take his place in the starting 11, with Harney only fit enough for the bench.

Glentoran were first to threaten inside of 60-seconds as Navid Nasseri stung the palms of Richard Brush.

Robbie McDaid then glanced over from Nasseri’s cross and the Omagh native almost capitalised on some indecision in the Cliftonville defence but his tame effort trickled wide of the target.

The opener arrived 16 minutes into the game and fell to the Reds. Conor McMenamin’s low cross fell to Gormley at the back-post though the striker swiped at thin air and in attempting to clear the danger- Paddy McClean inadvertently turned the ball into his own net.

Glentoran responded positively as a timely challenge from Conor McMenamin denied Paul O’Neill and the winger was on hand to turn Marcus Kane’s header behind from the resulting corner.

Just after the half hour mark, the East Belfast outfit got in behind the Cliftonville defence through Nasseri whose cut-back to McDaid was blocked and Paul O’Neill snatched at the opportunity and sliced it wide.

Parity was restored in the 36th minute as Marcus Kane’s free-kick wasn’t dealt with and Robbie McDaid took advantage, rifling to the bottom corner to make it 1-1.

In first-half injury time, Navid Nasseri saw his shot charged down on the edge of the area and Paddy McClean blasted wide of the target as the sides headed at the interval with nothing between them.

Glentoran picked up were they left off at the break as Rory Donnelly glanced a header wide of the post.

Richard Brush was forced to collect a high cross from Marcus Kane, while Paul O’Neill hooked an effort over the bar.

Cliftonville carved out their first opportunity through Michael McCrudden after Chris Curran’s cut-back, but Elliott Morris gathered the near post shot at the second attempt.

Just before the hour-mark the same duo combined and McCrudden flashed a shot inches wide of the target.

Conor McMenamin then stung the palms of Morris and shot high and wide after Curran slipped him in.

Glens' substitute Ciaran O'Connor's first contribution was to test Brush with a high shot that the Reds' shot-stopper was more than equal to.

Robbie McDaid then saw his low shot deflected behind by Breen and on 84 minutes, watched on as his towering header clipped the outside of the post.

The Glens went close again through Keith Cowan’s header from an O’Connor cross. The game became stretched and it was the Reds turn to attack in injury-time but Chris Curran fired high over the bar and namesake Ryan miscued as extra-time would be required.

Richard Brush made a terrific save from a looping Marcus Kane header that was sneaking under the crossbar early in the first period.

However, Cliftonville were guilty of spurning two gilt-edged opportunities: First, Gormley shot high over the bar from Ryan Curran’s square pass; then a low Gormley cross was bundled clear as far as Ronan Doherty who drew a fine save from Morris.

In the second period of extra-time, Gormley slipped in McMenamin who flashed a low shot inches wide of the post.

Substitute Johnny Frazer then fire wide from Nasseri’s high cross whilst Aaron Donnelly shot high over the bar as the game headed for the dreaded shoot-out.

Joe Crowe edged the Glens 3-2 ahead and the first villain of the shoot-out was Ryan Curran who fired wide.

Richard Brush spared his blushes by denying Keith Cowan and Joe Gormley levelled at 3-3 with a spot-kick left each.

It was match-point Cliftonville when Elvio Van Overbeek saw his penalty saved by Brush but Conor McMenamin spurned the opportunity for victory as Morris saved and sudden death was required.

The next three respective penalty takers for both side held their nerve as Navid Nasseri, Ciaran O’Connor and Johnny Frazer all converted, with Ronan Doherty, Jamie Harney and Liam Bagnall all replying.

Glens' captain Marcus Kane put his side 7-6 ahead but Conor McDermott was repelled by Elliott Morris to leave the Reds heartbroken as Glentoran moved into Friday evening's final.