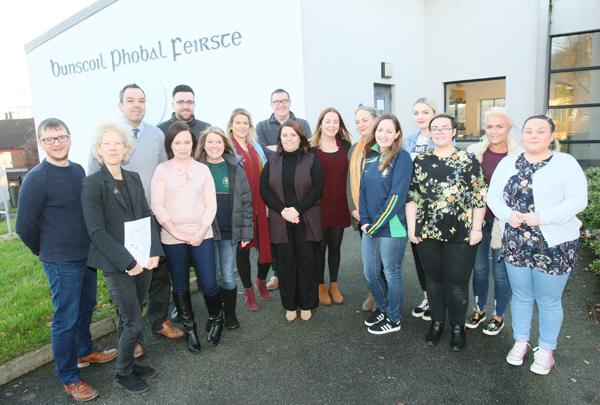 THERE has been a great response to the research being carried out on the career paths taken by ex-pupils from Irish medium schools in Belfast, according to Pobal.
The independent advocacy organisation for the Irish speaking community has been touring Belfast Irish medium schools in recent week as part of its unique research project, to find out where the ex-pupils of Irish schools are now in terms of further education and employment.
“We have had a great response from schools and the whole community for the project, which is being carried out with support from Belfast City Council Capacity Building programme,” said Janet Muller, Pobal’s Director.
“This research has really sparked people’s imagination and their memories too. It is amazing for people to think that there is so little base-line information about where former pupils of Irish medium schools in the city are now, since the first schools were established in the ’70s.
“Already, we have heard great success stories and we are looking forward to hearing more. So if any past pupil hasn’t already filled out our questionnaire, we encourage them to do so asap. It doesn’t matter if you are an artist, a call centre worker, a taxi driver or a doctor, whether you work in the home or are unemployed – we want to hear from you.”
Janet said there may be particular patterns or themes that can be identified from the research and that will be helpful to inform and build the vitality of the Irish speaking community.
“It can also increase the evidence available so we can engage with existing and new employment, training and further education opportunities linked to emerging labour market needs.”
To carry out the research, Pobal has prepared a bilingual electronic questionnaire which is simple to fill in. Responses can be sent back easily at the push of a button at the end of the survey. The questionnaire can be found on Pobal’s website (www.pobal.org) and Facebook page @pobalachtgaeilgeanois), and copies can be obtained by contacting Pobal at eolas@pobal.org
The results of the research will be available by late spring 2018.