Harbinson optimistic that Antrim’s veterans will return to county colours 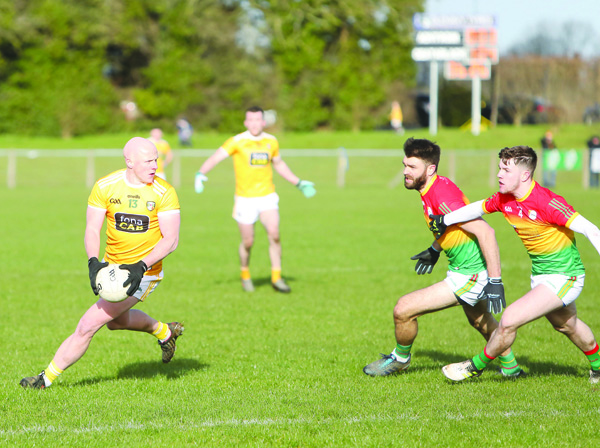 ANTRIM senior football manager Lenny Harbinson remains optimistic that many of the elder statesmen of the Saffron squad would return for next season in the event of no further inter-county games taking place in 2020.

Prior to the Covid-19 pandemic and the shutdown of all GAA activity in March, Antrim were well-posed to gain promotion out of Division Four of the Allianz Football League.

Coming off the back of an impressive 2-21 to 1-12 win over league-leaders Limerick in Portglenone, Antrim needed wins over Wicklow (away) and Waterford (home) in their final two games to confirm a top-two finish.

Their cause was bolstered this season by the return of Paddy Cunningham and Michael McCann to the squad while Tomás McCann was also nearing a return after undergoing groin surgery.

Cunningham, who played a key role in Antrim’s early season success, has already spoken of his fears that he has donned the Saffron jersey for the final time in the worst-case scenario of no further inter-county action being played this calendar year.

While Harbinson has yet to address the issue with the aforementioned trio, he feels his side would have “unfinished business” going into next season and hopes that would be enough of a motivator to stave off any potential retirement talk.

“It would be disappointing if there was no football or hurling this side of Christmas if 2020 had to be a write-off,” said Harbinson.

“To me then, the logical thing would be going into 2021 is to play out the 2020 league campaign. With a bit of planning I don’t see that being a major hurdle.

“You could play it in a week – you only have two games. That could be played in January and you could dispense with the likes of the Dr McKenna Cup and the O’Byrne Cup.

“That would then sort out what the 2021 leagues would look like. That campaign could be started in February and have that played off in a seven-week period.

“In relation to some of the players who have come back, I would think that they would see, in the event that it ended abruptly, the season has unfinished business and return next year.

“I haven’t been thinking that way and I haven’t had conversations with anybody, but I’d imagine they would want to be involved with the next campaign to finish things off properly.”

It remains unclear when games, club or county, will be permitted to return, but there is a renewed sense of optimism as lockdown measures, North and South, begin to ease.

Harbinson, who has stated his belief that county action should return before clubs due to the smaller numbers involved, revealed he has eased the training burden on the Saffrons until such a time that there is a clear date for a return to action.

“From an Antrim perspective, in the first number of weeks we decided to give the players their own fitness programme to work at from home,” added the Antrim boss.

“We continued to abide by the restriction issues and followed advice, not only from the Stormont Executive, but also from the Irish government and (GAA) Central Council.

“After a few weeks, we tried to keep players engaged in a way which was not only good for their mental health, but also their physical well-being. We came together once a week via a Zoom call to refresh some of the tactical thinking behind what we have been doing this season to keep things fresh in everyone’s mind.

“About four weeks into the lockdown, it became clear that the country would be going into quite a strong lockdown and, from a sporting element, you could see the earliest start date for any activity was going to be towards the end of July.

“That still seems to be the case so we decided to give the players a break from our weekly Zoom meeting and allow them to continue with their weekly fitness programmes.

“We will review that break going into the second week of June and that’s the plan of action at the minute. Players want to play football and there is no point in listening to me when there is no clear end date in sight. Players have been on the go since last October so a break of three or four weeks will hopefully be of benefit.”

Despite Harbinson’s views on counties returning before clubs, the GAA have confirmed that plans are in place to stage club games in preparation for a further relaxation of restrictions.

GAA president John Horan has also clarified comments made last month in relation to games not being played until social distancing guidelines were altered.

The GAA has previously stated that all GAA pitches would remain closed until July 20, but there are growing calls for facilities to be opened up sooner and Horan told GAA.ie that the association would return to action when it was deemed safe to do so.

The GAA’s Covid-19 Advisory Group is also busy working on a ‘Return to Play’ booklet for all county boards to use as a guideline and adhere to.

There is also hope that some of the GAA’s Cúl Camps could still take place later in the summer, albeit with vastly reduced numbers, although some counties like Tyrone have already cancelled theirs for 2020.