Herring-Frampton: History beckons for ‘The Jackal’ 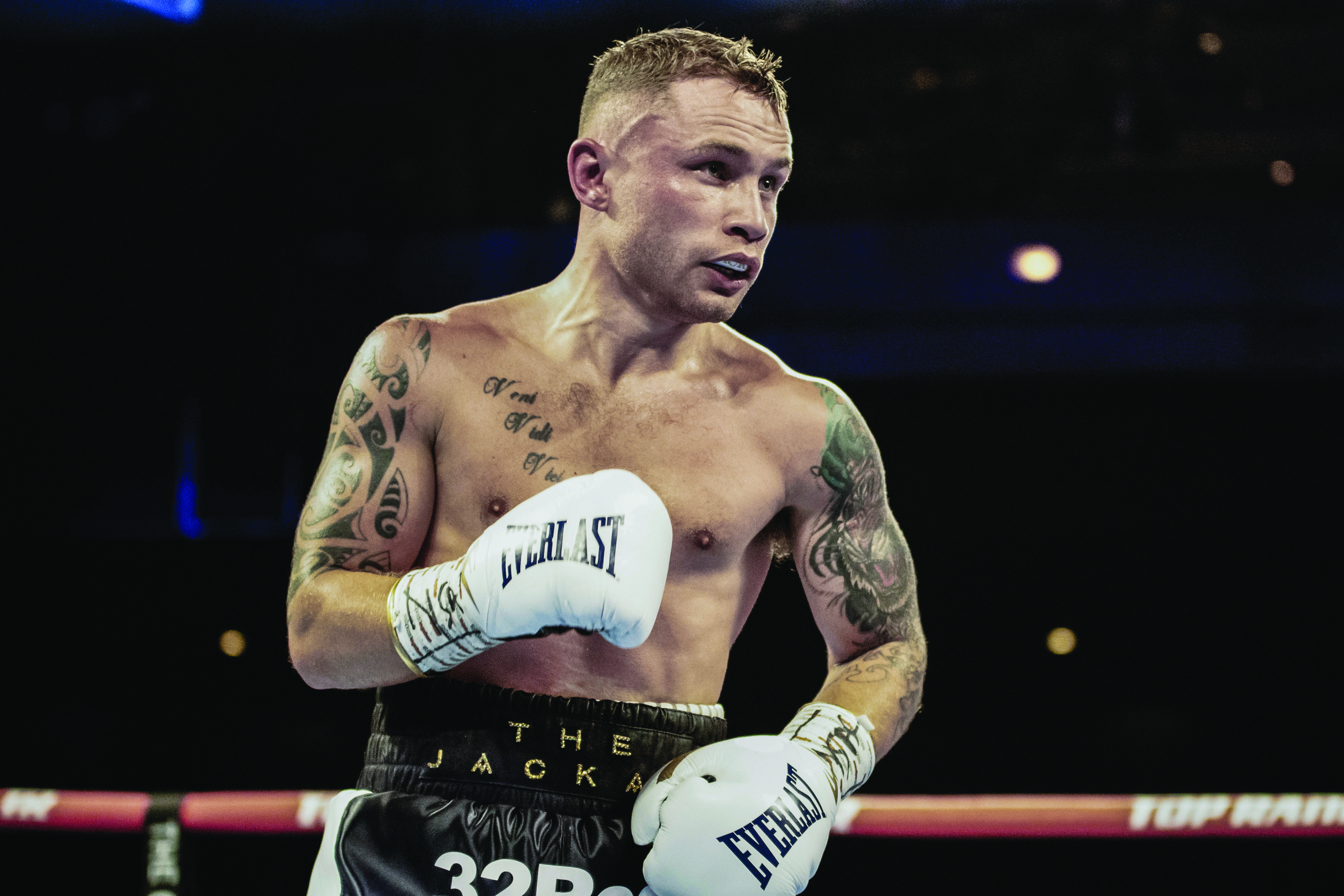 JUST under five years ago, the previews and predictions speculated whether Carl Frampton could be a force at featherweight having stepped up from super-bantamweight to face WBA champion Leo Santa Cruz in Brooklyn, New York.

Many believed that while Frampton possessed the attributes to be a bona fide player on the world stage at 126lbs, facing an all-action Mexican to whom he was conceding considerable height and reach would be a bridge too far.

‘The Jackal’ tore up that particular narrative, delivering the performance of his life to claim world honours in a second weight division and cement his status as a true great of Irish boxing.

Fast-forward to today and the same questions are on the lips of the boxing public as the mountain to climb seems greater again with WBO super-featherweight champion Jamel Herring ready to throw down in Dubai this Saturday.

The North Belfast man enters the ring as a favourite to some and rank outsider to others as he prepares to create a piece of Irish sporting history by becoming the first three-weight champion and perhaps secure his place in boxing’s Hall of Fame.

In the build-up to that Santa Cruz victory, he stated his intention to hit the Mexican hard early on to gain respect and reduce the punch output. That plan worked to a tee as he staggered Santa Cruz onto the ropes in the second and by the time the defending champion felt comfortable to pour forward in the second half of the fight, the Belfast man was well clear on the cards.

Herring does not have the same style. The ex-Marine is a southpaw who has good fundamentals, a dangerous uppercut but will enjoy a considerable reach advantage, meaning Frampton will have to get into the danger zone to get his own shots off.

However, this does not mean he will simply look to stand in the pocket and trade.

His footwork has always been a huge attribute and is one of his keys to victory on Saturday as getting inside to land and out again will be essential to the game-plan.

“There is more than one way skin a cat,” said the 34-year-old who will not only have had to adjust to the time zone and climate in Dubai, but the expected opening bell at 1.30am local time.

“People say I’m going to have to get on his chest and close to him from the start, but I feel like I have some of the best footwork in the division when I use it; my distance control is very good too.

“There will be opportunities to nail him, hit him hard and hit him clean, so when they come, I’ll take them, and he’ll know all about it.

“He’s a tough guy but I feel really up for this fight and I’m going to do what I’m meant to do - get the win.”

Absolutely delighted that my fight will be shown to the masses on free to air TV. It is where the sport of boxing should be shown, accessible to everyone in the country. Having the potential of millions being able to watch me make history is truly special. Thankyou @Channel5Sport pic.twitter.com/Btei9U0YEy

It’s not a foregone conclusion that the bigger man wins this fight simply because of size. Just ask Oscar Valdez who many thought was too small for Miguel Berchelt when he challenged for the WBC version of the 130lb title in February, but Valdez put in a sensational performance to not just win, but do it in emphatic style with a stunning knockout.

“It’s probably a similar sort of size difference between that (Valdez-Berchelt) or close enough, but there are always ways around fighting big guys,” Frampton continued.

“I’ve fought big guys my whole career and I suppose Jamel Herring is going to be the biggest I’ve fought, but I genuinely believe I’m going to do alright here and I’m confident that I can beat him.”

This fight was due to take place at Windsor Park on June 13 last year, but the offset of the pandemic put paid to that.

Instead, both he and Herring went their separate ways for fights in late summer with Frampton actually competing at lightweight in a tick-over bout against Darren Traynor in London.

An eye injury sustained by Herring in his win over the disqualified Jonathan Oquendo meant a late 2020 showdown wasn’t feasible, so February 27 in London was supposed to be when this eagerly anticipated showdown took place until a hand injury forced the Belfast man to seek a slight delay.

Having waited so long for this opportunity, a few extra weeks haven’t hurt although the delay may have played into his hands as he suggests Herring struggles at the weight and that theory appears to be supported by the 35-year-old American’s stated intention to move up to the lightweight division for his next fight.

“It’s been a long time coming, but it gives me a huge opportunity,” the Tigers Bay man agrees.

“The delay probably suits me more than him as I think that I’m long enough in the tooth, but Herring is even longer than I am. He has to hold the weight for such a long time as well, so that has to hurt him a bit. I think everything suits me a little bit.”

Having boxed on the biggest stage of them all as a headline attraction in the MGM Grand, Las Vegas; topped pay-per-view cards; fought in front of expectant home supporters in a purpose-built arena when he won his first world title at super-bantamweight against Kiko Martinez, pressure does not weigh heavily on his shoulders.

This fight has been dubbed ‘Legacy’ with Frampton fighting for just that, although is would be a harsh critic to suggest he hasn’t already secured as much with his achievements to date.

Still, it is a novel situation where he is front and centre with the champion’s bid to create his own legacy almost pushed to the shadows on this side of the Atlantic at least.

This scenario is water off a duck’s back for the Belfast man who believes the empty hall at Caesar’s Palace in Dubai will allow him to fight with freedom and insists the pressure is all on the shoulders of Herring.

“I think the most pressurised situations are the ones where you are expected to go and hammer somebody,” he insists.

“A lot of people have me as the underdog in this fight, some people don’t, and I think it’s pretty evenly matched in the bookies, but there’s no pressure on me.

“I’m just going out to do what I do, and I won’t have expectations of a massive home crowd on my back that have paid good money to watch me perform, so there is no pressure on me going into this fight at all.”

Still, there is the expectation that Frampton will cap his career with a fourth world title belt to add to the IBF and WBA super-bantamweight, plus WBA featherweight.

A fifth title belt eluded him back in December 2018 when his bid to dethrone then-IBF featherweight king Josh Warrington fell short in Manchester.

That defeat left Frampton with much soul searching as he initially felt the time was right to hang up the gloves, but on reflection decided that a crack at winning at the third weight was too tempting to turn down.

It was the support of his family and friends that got him through the dark days after that defeat, plus the burning desire to ensure that was not how his career would end. Victory on Saturday will be for them.

“I still have a lot of regrets over that fight and how I performed, so it would be nice (to put that behind me),” he reflects.

“Things are just falling into place at the right time for me and I believe I’m going to do this.

“It would mean so much to me and my family, plus everybody who has had a small part to play in my career.

“I want to give this my best shot and do whatever it takes to have my hand raised, but I’m genuinely full of confidence that I’m going to beat this guy.”

New episode of @inside_fighting coming Friday evening which covers the month leading up to the fight, including the journey to Dubai, the digs and my last few training sessions. https://t.co/hEADpSfrpU

Frampton has won the hearts of his home city throughout a career that has spanned almost 12 years.

The support grew and grew from the early days of fighting on undercards or toping the bill at the Ulster Hall during the big freeze of 2010, to the extent he brought 16,000 to Manchester and 5,000 to Las Vegas. The fans may have to cheer from home this weekend, but the ‘Jackal Army’ will be there in spirit.

It is going to take a career-best display for Belfast’s favourite son to add another chapter to a glorious career, but as he proved in the summer of 2016, he can rise to any challenge. History beckons.