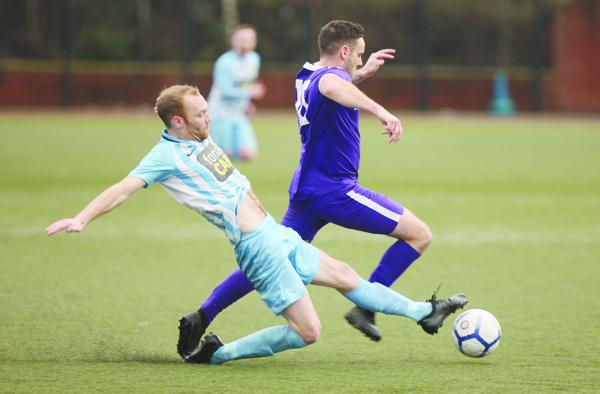 IMMACULATA bid to cause an upset when they host Newington in the quarter-finals of the Intermediate Cup at The Cage on Saturday.

Newington, who lost out to Linfield Swifts in the final of the Steel and Sons Cup final on Christmas Day, are one of the highest ranked teams remaining in the competition.

The Mac, in contrast, are posed for a modest mid-table finish in the NAFL Premier Division. Yet, their distinguished history in over the last decade means they’ll relish the underdogs role.

During a trophy-laden period under former boss Kevin Lawlor, Immaculata claimed the 2016 Premier Division title and a hat-trick of Clarence Cups between 2015 and 2017.

The departure of Tony Heagney at the start of the season saw the club start their 2019/20 campaign on the back foot, but their managerial quandary was solved when Irish League stalwart and former Immaculata player Brian McCaul took over in December.

After 10 games in charge, McCaul knows his team will relish the opportunity to claim the scalp of the North Belfast side having claimed a 1-0 win at Bangor in the third round.

“At this level, it is hard to know who is favourite. Newington are essentially ‘Championship 2’ and we played a team (Bangor) from that league and beat them.

“I don’t know how much of an underdog we are. At home, we will fancy our chances against anyone.

“They’ve had success in the Steel and Sons in recent years so they are obviously a good cup team. I don’t know a lot about Newington, but I think if we play to our best we can win.

“It is a great opportunity for us. When we came in, the league was already gone. We have to relish a cup opportunity and, when you get a home draw, you have to fancy your chances regardless of who you play.”

McCaul signalled his intentions at the Grosnevor Road outfit early on by bringing in James Haughey from Belfast Celtic in January.

However, he is set to be without the services of centre half-back Eddie Begley following his dismissal in Saturday’s 3-1 league defeat at Crumlin Star.
“Eddie (Begley) has been a big player for us,” added McCaul.

“Up until last Saturday, we’d only conceded three goals in nine games. I dropped Collie O’Riordan into centre half as well and it has been a great partnership. Otherwise, we should be at full strength. We’ve a few players who are carrying knocks, but you are going to get that at this time of the year.”

Newington manager Conor Crossan, meanwhile, knows his side can’t afford to take anything for granted ahead of Saturday’s tie.

“I don’t know if we’d be strong favourites – Immaculata have been going well since Christmas time when their new manager came in,” said Crossan.

“I watched a bit of them against Crumlin Star last Saturday. Even though they were beaten 3-1, I was impressed with some of their play. They have a good shape and they are very well organised.

“It will be a very tough game, especially going over there and I’m sure they’ll have a good crowd behind them.

“I always look forward to playing an Amateur League team because it is about the bragging rights as well. It adds a bit extra to it.

“I think the Mac will fancy their chances. Over the years, under Kevin Lawlor, they went into every game believing they could win.”

Crossan will also be seeking a response from his players following a disappointing 2-1 defeat to Armagh City at Solitude in their most recent league outing.

The result leaves them 12 points behind Annagh with just two games in hand and Crossan knows they will need a vastly improved showing if they are to progress in the Intermediate Cup.

“We had a very disappointing result against Armagh, we played very poorly that night,” reflected Crossan.

“Armagh, in fairness, have had a few good results of late and I was impressed by them. They drew with Annagh and they drew with Bangor last weekend.

“We are a lot better than we showed on the night. We had a lot of the ball, but couldn’t do anything with it. We just ran out of ideas. It was one of those games when too many of our players just didn’t perform.

“It is inconsistent at the minute. We can’t get a run of games in the league at the minute. I can’t complain too much as we are still in the Intermediate Cup.”