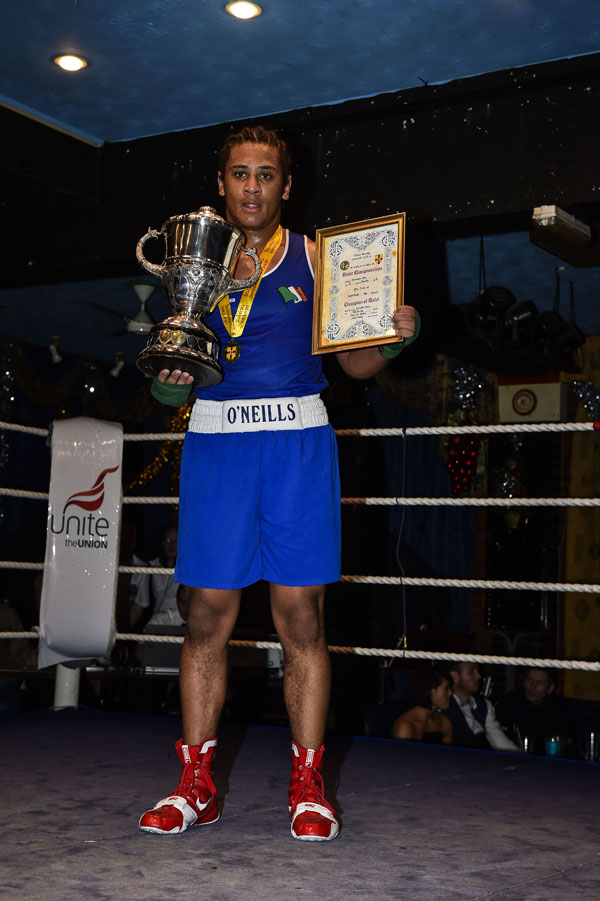 2014 champion, Caoimhin Hynes set-up a semi-final against Steven Donnelly thanks to his win over Michael Bustard

CAOIMHIN Ferguson began life in Elite boxing with an excellent performance at The Dockers last night to advance into the 64kg semi-final of this year’s Ulster Elite Championships.
Gleann’s Ferguson produced a performance beyond his years to overcome the experienced Vinny Esler with a display of quick in-and-out attacks.
All Saints' Esler held a height and reach advantage, but Ferguson was straight on the front foot from the southpaw stance, landing two solid lefts.
His speed and accuracy was the telling factor as he continually caught Esler who was being picked off when trying to utilise his jab, but Ferguson was landing with crisp, eye-catching shots throughout and there was only one winner at the finish.
“I knew I was up against it because he was tall so I knew I had to be sharp,” he said after.
“Other than that, I thought I boxed well.
“In the final round I felt a bit tired, but that’s my first fight since nearly a year ago. I still thought I was sharp enough and that was my first Elite win. It’s good to get that win and off to a good start. Hopefully I can go onto fight in the Ulster Hall now. I have one more fight to get through.”
Ferguson will now face Holy Trinity’s Bernaldo Marime in Friday’s semi-final. Marime competed for his native Mozambique in the 2014 Commonwealth Games in Glasgow.
“He was at the last Commonwealths, but I know my boxing ability,” he insisted.
“I will be smarter in the second fight, sharper and go through the rounds easier.
“Other than that, I’m happy with the win and just want to push on now.”
Former 75kg champion, Caoimhin Hynes advanced into a mouth-watering 75kg semi-final against Rio Olympian, Steven Donnelly after his unanimous quarter-final victory over Monkstown's Michael Bustard.
After a cagey start, Hynes enjoyed a strong finish to the opening round as he began to find his range.
Bustard tried to change the pace in the second as he marched forward, looking to land his right jab and had some success, but Hynes always had an answer to stay ahead and he continued to do enough in the third, finishing strong to take a fine win and set up that semi-final with Donnelly on Friday.
"It was good to get the first fight in a quarter-final," he said after.
"It’s a good enough draw, but it was a tough test. It’s good to get the first fight out of the way, so I'm feeling good after that performance.
“I won this two years ago at 75 (kg) and missed out the year after with a hand injury, so hopefully I can go on here to get my second title.”
Next up is Donnelly in what could be a fight of the night tomorrow (Friday).
"It's a big fight for me on Friday night against an Olympian,” Hynes agreed.
“He's won this competition a lot and has been to two (Commonwealth) Games, but it's mine for the taking."
The other 75kg bout went the way of Emerald's Conor Docherty who had a 3-2 win over Noel Donnelly.
It was an explosive start to the 2017 Championships with Sean Duffy and Gerard Matthews producing a fire fight in the first bout of the evening.
Matthews enjoyed a decent start with his southpaw left finding the target, but Duffy's greater strength began to tell as he walked the St Paul's man down to dominate the exchanges up close and claim a unanimous win. Dylan Duffy of Pegasus was a 4-1 winner over Callum Trengrove in the other 60kg quarter-final.
At 69kg, Aidan Walsh impressed as he controlled Mourne's Ross Boyle and scored a unanimous win. He will meet Gerard French in Friday's semi-final after the Clonard man forced Eugene McKeever to be stopped on cuts.
In the 52kg semi-final, Clonard's Conor Quinn scored a unanimous victory over Jason McKay to secure a place in next week's final against Rio Olympian, Brendan Irvine.
Sean McComb also booked his place in the final next week, winning his 64kg semi-final impressively against Matthew McCole, while Scorpion’s Karol Diugosz reached the 81kg final with a 4-1 win over Michael McAllister of Dockers.