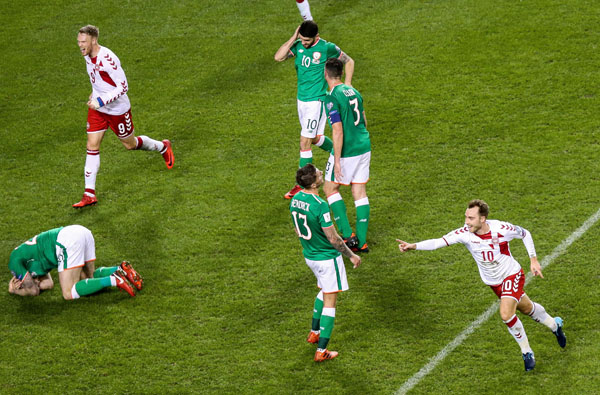 A NIGHT that began so brightly ended so bleakly for the Republic of Ireland as Denmark came back from a goal down to hand out a drubbing and stamp their ticket to next summer's World Cup in Russia.

It all started so well for Martin O'Neill's side at the Aviva Stadium when Shane Duffy nodded them into an early lead, but this tie - hanging on a knife edge following the 0-0 draw in Copenhagen on Saturday - was flipped on its head when Cyrus Christie turned the ball into his own net in the 29th minute.

It was to get even better for the visitors three minutes later when Christian Eriksen clipped the ball over Darren Randolph to leave the Irish needing two to overtake the Danes.
Despite a bright start to the second half, Irish hopes were extinguished on 63 minutes when Eriksen curled home his second. He completed his hat-trick 10 minutes later as the Irish capitulated and as the game moved into stoppage time with the stadium emptying, Nicklas Bendtner blasted home from the spot to seal the Danes' passage to Russia.

It was a bitterly disappointed Irish manager, Martin O'Neill who faced the media after and the Derry man admitted Denmark's double in the first half made it an uphill battle.
"I'm really disappointed obviously," he said.

"We got off to a good start and had a chance to go 2-0 up. We needed that to get a proper foothold in the game. We conceded two in a couple of minutes and that knocked us for six really. Two very poor goals and they turned the tide.

It was a lively start at the Aviva Stadium with the decibel level as high as it has been in years and the home support almost lifted the roof off on six minutes.
Nicolai Jorgensen made a mess of Robbie Brady's long free-kick and Duffy was quickest to react, rising to nod over the advancing Kasper Schmeichel and into the net to give the Irish the lead.

Denmark were quickly on the front foot and Randolph was forced into saves from William Kvist and the ever-lively Pione Sisto within the space of a minute.
Ireland found a response and Cyrus Christie did well to win a ball he had no right to on 22 minutes and whipped in a teasing cross from the right which Daryl Murphy diverted just past the post.

Two minutes later and James McClean was in on the left, but his effort flashed across the face of goal and just outside the far post.
Denmark always looked dangerous going forward and on 29 minutes they drew level and went ahead in the tie.

A quick corner led to Sisto weaving along the line, poking the ball through the legs of Harry Arter and he played a teasing ball across goal which Christensen got on the end of with his effort off the post squirming through the legs of Christie and into the net to take the wind out of Irish sails.

Three minutes later and the task became twice as difficult for Ireland as from a mistake from Stephen Ward, the Danes swept forward with Yussuf Poulsen playing the ball into Jorgensen who in turn fed Eriksen who, first-time clipped the ball over Randolph and into the net via the underside of the bar to leave it 2-1 at the break.
Ireland needed to shake things up and Martin O'Neill introduced Wes Hoolahan and Aiden McGeady for David Meyler and Harry Arter.

This prompted lively start by the Irish, but they couldn't create many clear-cut chances with Duffy's header from Brady's cross on 55 minutes gathered low by Schmeichel.
The visitors were always dangerous on the break as gaps began to appear with Randolph called into action to deny Sisto and Eriksen, but the Tottenham man was to get his second of the night on 63 minutes to put the tie beyond Ireland with a curling effort from the edge of the box.

It would get worse for the hosts as on 73 minutes, another mistake, this time from Stephen Ward who didn't deal with Jorgensen's low delivery and Eriksen pounced to smash home his third and Denmark's fourth.

Denmark were not done yet and substitute, Nicklas Bendtner cracked home a 90th minute penalty after he had been fouled by James McClean to rub salt into the Irish wounds on a night that began so well, but ended in disaster for the Boys in Green.

"I'm naturally disappointed because a couple of nights ago in Copenhagen we fought very strongly," said a subdued O'Neill.
"I thought we could win the game ans he start we got was great, but definitely the second goal....
"We had two great chances to make it 2-0. James (McClean) had the shot that went past the post that we needed to go in to give us a really strong foothold in the game. In the end we were well beaten.)

O'Neill wouldn't be drawn on his future after when asked about the two-year contract extension he had agreed to with FAI Chief Executive.
In the wake of such a heavy defeat, there will be questions whether the Kilrea man is the one to lead Ireland forward, but he said that is for another day.

"I haven't spoken to John about it since, so I will speak to him I'm sure in the next couple of weeks," he added.
"We were beaten in a playoff game. We fought tooth and nail to get into this position. We are disappointed obviously, but I have to commend the players for getting this far."