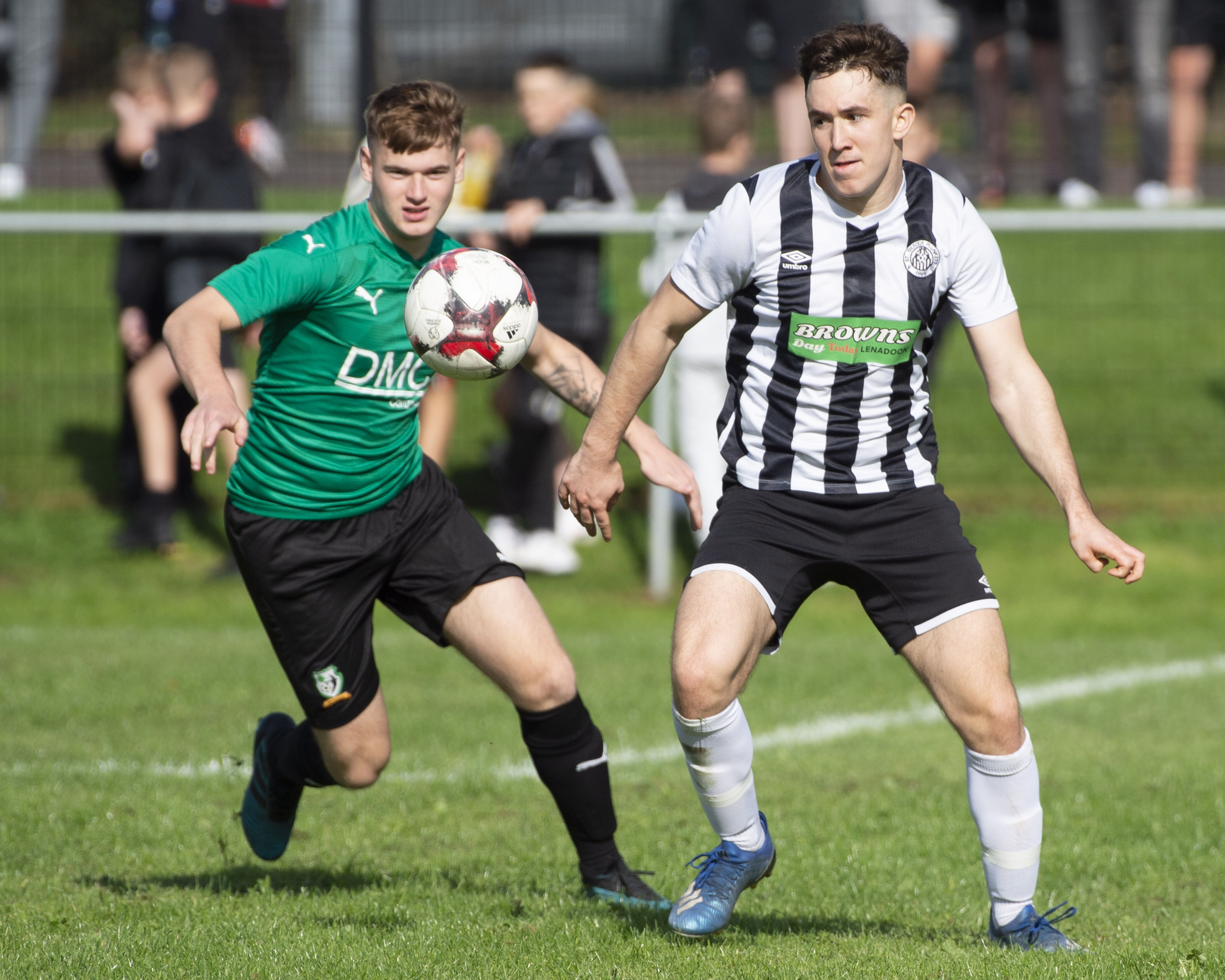 MARK McDonald slotted home the decisive penalty as St James' Swift6s reached the Third Round of the Irish Cup at the expense of St Oliver Plunkett at Lenadoon Park on Saturday.

The visitors did not have this game all their own way as Plunkett recovered well from conceding an early goal to deservedly drawn level at half-time and while they were on the back foot as the second half wore on, they did have the best chance to settle the affair in 90 minutes.

However, Swifts pushed on in the added period and were denied twice by the goalposts and after going down in the shootout, they converted their remaining four spot-kicks to advance.

This was a lively game played at a decent pace throughout and opened as such with both sides enjoying an early spell of possession, but it was Swifts who struck first when a stray ball back to the goalkeeper was seized upon by Ciaran Hyland who gleefully slotted low to the net with five minutes gone.

The setback didn't deter Plunkett who dusted themselves down and immediately went about getting back into the game, doing so well as they began to probe the Swifts' defence.

An excellent corner from Eoghan Hamill was headed just wide by skipper Michael Healy and then a good ball in by Michael McCusker dropped to Gary Dunlop whose low shot forced a save from Padraig Morgan.

Swifts did have their moments too with a ball in from Michael Feerick almost ended up in the net but sailed just outside the post.

Long throw-ins by Plunkett's Michael Mervyn were creating problems for the visitors, but the ball just wouldn't drop as Swifts were able to clear their lines and at the other end, excellent deliveries from Sean Pat Donnelly almost allowed Hyland to double his tally on a couple of occasions, but he headed too high from close range with one and then glanced wide from a second as the clock ticked towards the break.

Swifts really should have grabbed a second on 43 minutes as Aaron Smyth played an inviting ball into the box that Plunkett's Micheal Healy tried to head clear, but caught a team-mate with Donnelly lurking but his low shot was well saved.

The St James' outfit were punished in the final minute of the half as Sean Jackson floated a free-kick into the area and this time the goal did come as Conor Nolan ghosted in to head past Morgan and level the game at the break.

Plunkett continued on the front foot as play resumed and two minutes in, Gary Dunlop went close with a curling effort that was just off target.

Hamill then shot into the side-netting on 63 minutes, but as the half wore on, Swifts began to enjoy much more of the play although they weren't able to create an awful lot with the Plunkett defence standing firm and putting in the challenges.

Conor Doran did force as save from Ruairi Murray, but the hosts had the best chance to win it with nine minutes to play as Michael McCusker played an excellent ball in from the right that broke to Sean Jackson just yards from goal, but he couldn't get it out of his feet as Swifts' defenders closed in and when he eventually did manage to poke towards goal, Morgan was able to smother the effort.

Swifts had a late chance themselves with a Donnelly free-kick saved by Murray who was also equal to Mark McDonald's follow-up as the game moved into extra-time.
The first opportunity fell to Plunkett just two minutes in when a corner broke out to Michael Mervyn whose rasping shot just cleared the bar.

Swifts did begin to enjoy more of the ball in Plunkett territory with substitute Alain Cante curling just off-target and then 12 minutes in, the post came to the hosts' rescue with Ciaran Hyland's shot clipping the outside and wide. At the other end, Healy headed wide from a Hamill corner as the teams switched ends still tied at 1-1.
The crossbar then denied Swifts four minutes into the second period when Donnelly struck brilliantly after Far Nolan kneed the baulk into his path, but the shot went over off the top of the crossbar.

Plunkett were looking a little jaded and two efforts from Ciaran Reid that were way to high was their only efforts at finding a winner, but there was a sense this game was destined for penalties and so it proved.

The hosts seemed to have the advantage as Reid slotted home the first spot-kick and then Murray saved from Nolan, but the shootout was level after two kicks as Healy shot wide and Hyland buried his.

Hamill and Padraig Robinson both converted, but it was advantage Swifts as Mervyn's shot hit the inside of the post and fell into the arms of Morgan with Donnelly giving his team the advantage.

Eugene Reid kept Plunkett alive as he slotted home his penalty, but Mark McDonald was given the chance to send Swifts through and he held his nerve to find the net and book a place in the third round for the St James' club.