It's take-off for Bearforce 1 on BGT 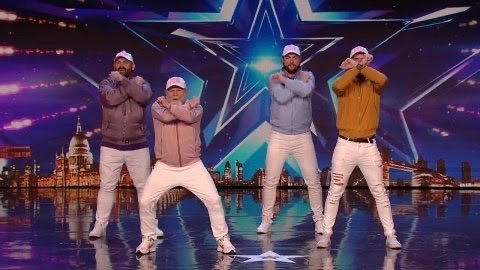 A GROUP of Belfast singers and dancers have made it through to the next stage of ITV’s Britain’s Got Talent show.

Bearforce 1 take their name from the original group, made up of Cavehill man Robert Brown and three Dutch men, formed in 2006.

In 2014, Robert and the group reformed with three new members and narrowly missed out representing Switzerland’s entry in the Eurovision Song Contest in 2015.

In 2019, Bearforce 1 was re-born again with Robert meeting Brian, Ambrose and Allen in a Belfast bar and sharing their passion for 80’s music before deciding to enter this year’s BGT competition.

In February, the group took to the auditions stage in Manchester for their performance.

In a clip shown on the hit show on last Saturday night’s ‘unseen’ version of the show, the group made it through despite failing to impress head judge Simon Cowell with their medley of 80’s music and dance.

Amanda Holden said she “absolutely loved it” with David Walliams stating it was “right up my street.”

Alesha Dixon said: “The vocals were a bit ropey but I loved it. It made me smile and happy. I couldn’t take my eyes off you. You were infectious.”

Simon Cowell was met with boos from the audience after saying: “You are fun guys. The singing was horrific and the dancing wasn’t far behind.”

Lead singer, Robert explained: “Simon was really nice to us despite buzzing early and the other judges loved it.

“We were on stage for about 20 minutes. The biggest shock was the audience- they went absolutely mental. It was incredible.

“We are over the moon to get through. We didn’t think anything would come of it but everyone warmed to us.

“We weren’t serious and it was all about a bit of fun. We didn’t go on to sing like Adele but we wanted to get everyone on their feet and have a good time and that is what we done.”

The group received three yes’ votes from Amanda, Alesha and David to advance but must now wait to see what happens with the next stage of the show amid the Covid-19 pandemic.

“ITV don’t know when the live shows will be,” added Robert.

“Whatever happens, happens. We might be eliminated even before that if they have let too many through which is also fine.

“We got through the audition stage. We had a bit of fun and that is the main thing.”

You can catch up with Bear Group 1’s successful audition on ‘Britain’s Got Talent: Unseen’ Episode 5 on the ITV Hub.