‘I’ve got a point to prove’ says ex-Antrim boss, Adams 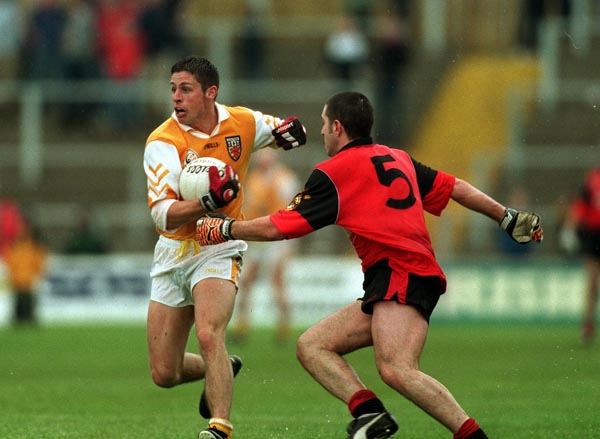 Gearóid Adams played a starring role when Antrim scored a famous win over Down in the 2000 Ulster Championship. He is now part of the Mournemen’s backroom team having managed his native county in recent years

THIS time last year, Gearóid Adams was plotting the downfall of Donegal along with joint-manager, Frank Fitzsimons.
Fast forward 12 months and the former Saffron star will be in the opposition dugout as Antrim take on Down in the Ulster Senior Football Championship in Newry’s, Pairc Esler on Saturday night.

It was around the time that Lenny Harbinson stepped into fill the void left by Adams and Fitzsimons when the St John’s clubman joined the Down backroom team following an invitation from Eamonn Burns. The appointment of Harbinson brought to an end a lengthy and sometimes controversial process.

Adams and Fitzsimons felt they had done enough to earn another term, but the county board opted to look elsewhere and Adams walked.
Lámh Dhearg native, Fitzsimons opted to let his name go forward through the nominations process, but was overlooked in favour of Harbinson.
While he insists the saga is now ‘water under the bridge’, Adams stressed that he has a point to prove against his native county this weekend.

“I didn’t hide the fact that after we were relegated last year, that I approached the county board and said for them to give us another two years. I felt we had a young team that we could bring on,” stated Adams.

“I was disappointed with the process and once I saw the procedures of nominations being put in place, I knew what was coming. Subsequently, big Frank was treated very unfairly in my opinion.

“That’s water under the bridge, but every coach worth their salt has a bit of pride and wants to get the best out of the teams they take.
“I am part of a big selection team in Down and there isn’t the same pressure. I have a point to prove because things didn’t go the way I wanted with Antrim.”

Still, Adams admits it will be a bizarre feeling when donning the ‘Maor Foirne’ bib in the red and black of Down this Saturday.
When the Championship draw was made back in October, Adams said he had a gut feeling the Mournemen would be pitted against Antrim.

“Aye, it will definitely feel strange,” said Adams.
“Through the league, I was able to keep it on the long finger so to speak. Now, over the last few weeks, there has been a lot of focus on it, especially knowing the players so well. It will be a strange enough experience.

“It is the first time since 2000 that the counties have played in the Ulster Championship. I played in that game. That’s why I am not a betting man – I had a gut feeling that draw would happen because it hadn’t happened in so long.
“That’s the name of the game now, there are a lot of coaches and managers taking different counties, you just have to get on with it.”

To add another layer of intrigue to the mix, Adams also rejoined the management set-up at his native St John’s last autumn following the departure of Paddy Nugent.
With Johnnies pair, Paddy McBride and Matthew Fitzpatrick set to play key roles for Antrim on Saturday night, Adams stressed the banter between the trio has been good-natured.

“The two boys also know a lot of the Down players because they went to St Mary’s and the Sigerson teams they played on had a lot of Down players,” added Adams.
“There has been a bit of banter going on between the players and myself.
“We are all keeping our cards close to our chests and not saying too much.”

If Adams has a point to prove this weekend, then so do the Down players.
Following their impressive run to the Ulster Championship final last summer, Down exited the All-Ireland series to Monaghan and suffered relegation from Division Two in the spring.

The Mournemen managed to defeat Louth, Roscommon and Tipperary and their tally of six points would have been enough to stave of relegation in both Division One and Division Three.

“The magic number changes every year,” reflected Adams.
“We knew after we lost to Clare that we needed to get to seven points. Last year, Down stayed up with five points, this year they were relegated on six points. There are fine lines and fine margins. Apart from the Meath game, Down deserved to get a more from a lot of the games, the Cavan game especially. It was strange because Down’s attacking third is always very strong, but Down found scores hard to come by.

“Until the Meath game, we had the best defensive record in Division Two.
“Converting scores at the other end meant we lost out on getting the points that would have saved our Division Two status.”

In recent days, Down have suffered a major blow with the news that wing-back, Darragh O’Hanlon has been ruled out with a back injury.
The Kilcoo ace was one of a number of players who shone for Burns’s side last year as they defeated Armagh and Monaghan in the provincial series.
Yet, much of the focus was on the scoring prowess of full-forward, Connaire Harrison and Adams knows Antrim will do their utmost of nullify his threat on Saturday.

“Down were the surprise package last year. Now people can try to predict what you are going to do,” said the Down coach.
“Teams have to adopt. The modern game is all about quick transition. You have to try and catch the Antrim rear guard out of position.
“Connaire has had to adapt his game because he has two or sometimes three men hanging off him.

“Antrim boast a very good defensive record this year. Himself and Donal (O’Hare) are going to have to try and find space in Newry.
“Other players need to step up. There are other good scorers in the team and hopefully they can take some of the pressure off Connaire and Donal.”

He added: “Antrim had a good enough league campaign. I know they would be annoyed at not getting promotion, but they were defensively solid.
“All the pressure is on Down. No matter what we say in the dressing room about not being complacent, they are going to be told by their family and work colleagues and everybody else that ‘it is only Antrim’.

Antrim’s last Championship win was against Laois back in 2015 before Adams joined the managerial set-up. He’ll be hoping Antrim’s big scalp in the Championship comes in the Qualifiers rather than Saturday’s Ulster SFC Quarter-final tie in Newry.