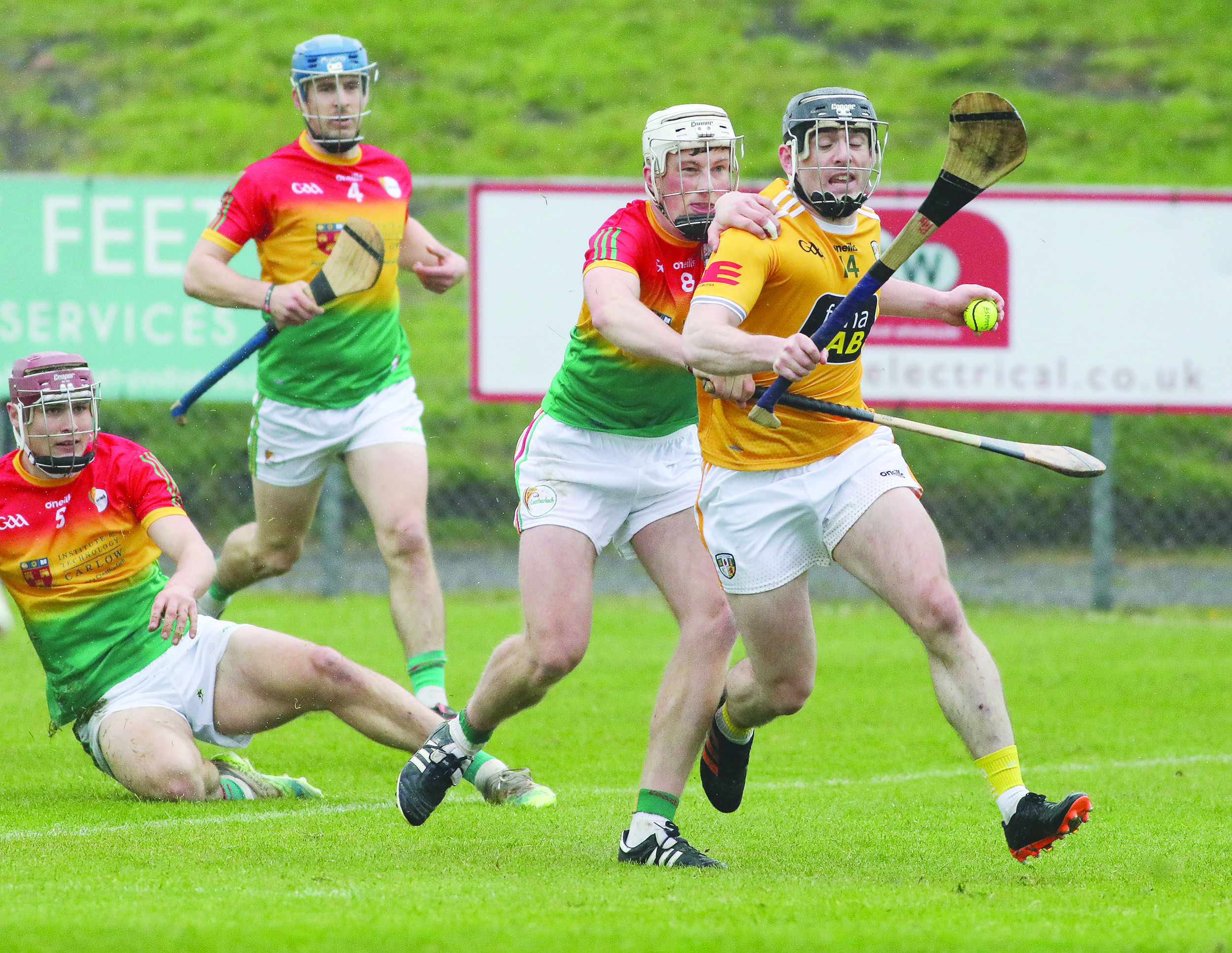 IT’S a straightforward scenario for Antrim’s hurlers in Navan’s Pairc Tailteann this Sunday as victory over Meath will see them book their place in the Joe McDonagh Cup final with a game to spare.

The Saffrons are the only team with a 100 per cent record after three rounds of games and another win would put them out of reach of at least the third-placed team and potentially everyone, depending on the outcome of Saturday’s meeting between Kerry and Offaly in Tralee.

Meath find themselves at the opposite end of the table with no points to show from their three games to date in what has been a difficult campaign, shipping defeats of 25 and 30 points to Carlow and Kerry respectively, while they did get to within nine against Offaly.

Antrim have not had it all their own way in the previous games and it took a last-gasp Conor Johnston goal to grab the win over Offaly, while a late rally saw them home against Carlow, but the manner of those wins highlight their ability to go to the end and find a way when the questions are asked - a quality necessary for any side with the ambition of silverware.

Their last game against The Royals came in the 2020 competition when they ran out 2-30 to 3-10 winners and a similarly ruthless display would do nicely this Sunday.

It would be fair to say that Antrim fans will be feeling very confident of their team’s chances this Sunday as they can secure their spot in the Croke Park decider on Saturday, June 4 before they play Kerry in next week’s final group fixture, but manager Darren Gleeson is urging caution and not taking anything for granted ahead of a game against a side scrapping to avoid relegation down to the Christy Ring Cup.

“It’s Championship hurling for us the whole way in now,” he said.

“Meath haven’t had a great year so far and we are wary they are going to be fighting for their lives to stay in the Joe McDonagh. This is their last home match so we have to be fully armed going in this weekend as they’re going to fight for everything.

“We’re the same as we’re trying to get into the Joe McDonagh final and have two chances. The first is this weekend against Meath and we’d like to take it.

“We know where we want to get to, but we won’t get there without full focus and concentration on Meath this weekend.

“We’ll give them full respect as Antrim has a bit of history there with Meath. Anything can happen in a game of hurling and we are well aware of this heading into the weekend.

“My job and the job of (selectors) Johnny (Campbell), Jim (Close), Clinton (Hennessy) and Gary (O’Kane) to make sure we have the lads mentally tuned into the task at hand. They trained very well over the weekend, so we’re expecting a big performance this Sunday.”

The treatment room has been extremely busy this year with players picking up injuries as others return.

It’s a similar story ahead of this weekend with Ciaran Clarke the latest casualty and he will not be available, while Neil McManus - who was forced off against Carlow - and Damon McMullan are also out.

Back-up goalkeeper Paul McMullan is also facing a spell out after picking up a hand injury on club duty for Glenariffe at the weekend.

Keelan Molloy continues to work his way back and will be monitored as-well-as Conor Johnston, while there is a better outlook for Matthew Donnelly and David Kearney.

“The last day we were lucky as we got Niall McKenna back in with some pitch time, had Conal Bohill and Michael Bradley back who were struggling there for a while,” Gleeson noted.

“Mattie Donnelly got a bad dead leg leading into that match. Matty, Keelan (Molloy), Neil McManus, and David Kearney are still all struggling.

“'Clarkey’ is definitely out for the weekend and Conor Johnston is 50-50. Damon McMullan is still out and unfortunately, Paul McMullan picked up a nasty hand injury at the weekend so we’ll see how that is.”

Best of luck to the lads on Sunday at 1 p.m. in Páirc Tailteann💪🏻 #GAABelong #MeathHurling #JoeMcDonaghCup pic.twitter.com/AKw6kq9Ge7

It has been something of a hectic schedule across the board with the new split season between club and county coming into force for the first time and with that, Gleeson believes it is no surprise the number of players picking up injuries has gone through the roof.

“We voted to have a condensed season,” he continued.

“We had three games in 13 days, so you’re going to pick up injuries from that and it was the same in the National League. That’s very frustrating, but not unexpected we’re getting these injuries.”