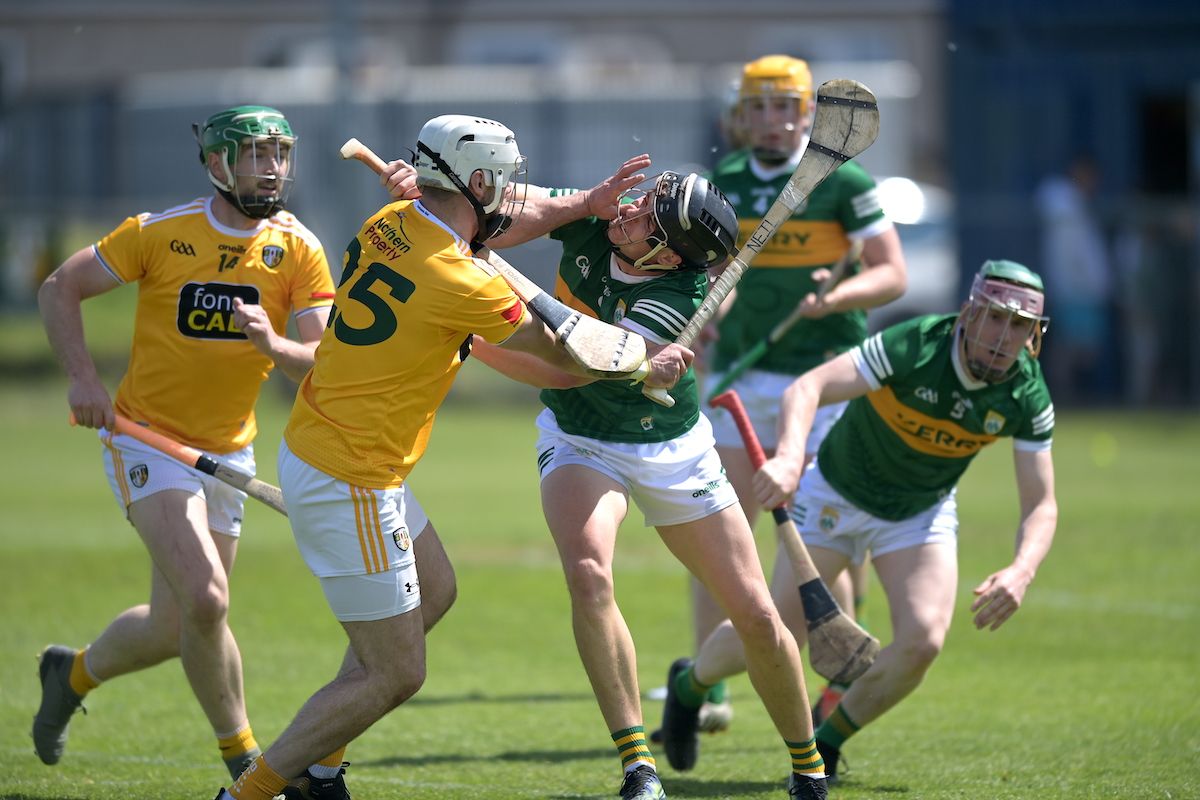 IT will be an Antrim versus Kerry Joe McDonagh Cup final as the Kingdom joined the already qualified Saffrons thanks to their win in what proved to be a dress rehearsal at Corrigan Park on Saturday.

On a day when Antrim wanted to win but Kerry needed to, it was the visitors who held off a late Antrim rally on a day of high drama as their win and Carlow's victory over Offaly saw Stephen Molomphy's side finish in second place in the group thanks to their superior scoring difference.

As word filtered through that the Barrowsiders were poised to claim the win in Tullamore, Kerry appeared comfortable in Belfast, but two injury-time goals left just one in it as there was a chance that Kerry were about to blow it, but as it was, the Kingdom managed to find the answers when their backs were to the wall to hold on and stamp their ticket for the decider.

Podge Boyle top-scored with 15 points in a flawless display, while Eoin Ross chipped in with four and Paudie O'Connor played a captain's part to help his side get over the line and reach the decider for the third year running to set up a repeat of the 2020 final that went Antrim's way.

Darren Gleeson opted to ring the changes for this game and he will have been fairly happy with how his side kept scrapping to the end in an effort to maintain their unbeaten record in the competition, but with the final already in their sights, this game was about getting minutes into legs and allowing others to take a break after a hectic run of fixtures since the start of the season.

"No one wants to lose out like that in the end," said Gleeson afterwards.

"A game of hurling is on and we're here to win all of our games. It's disappointing to lose it, Kerry won by two in the end, but that's hurling.

"I thought Carlow would give Offaly their fill of it down there. Carlow were a really tough team for us up here and we had to hurl unbelievably well in the last five minutes to get out with a win against them.

"It just shows you how good this competition is and I believe down in Ballycran it was a real dogfight between Meath and Down to stay up, so it's good for Ulster hurling that Down stayed up.

"Anyone can beat anyone, so the final is nicely poised and we'll see what happens on the day."

Kerry was the side that absolutely had to win this game and with the aid of a strong wind, they began with intent, rattling off the first four points with Eoin Ross setting them on their way and Podge Boyle hitting three of his nine first half-scores.

Antrim began to awaken with James McNaughton and Eoin O'Neill registering, but Kerry remained a step ahead until the Saffrons gradually began to assert themselves with a pair of Nail McManus points sandwiching one from Michael Bradley.

Points from Aaron Bradley and Conor McCann had the sides locked at 0-7 on 22 minutes, but after an exchange of points, Kerry regained control with five of the next six points - three from Boyle with Fionan MacKessy and Ross getting in on the act.

A pair of James McNaughton frees brought Antrim to within two, but a Boyle free on the stroke of half-time left the visitors 0-14 to 0-11 to the good, although they were aggrieved play wasn't allowed to continue for that late free as Shane Conway buried to the net although play had been brought back.

Despite playing into the wind in the second period, the Kingdom began to pull clear with Eoin Ross setting them on their way, Colum Harty getting on the sheet, Jordan Conway popping over off the bench and Ross adding to his tally.

A pair of James McNaughton points was all Antrim had to show for the third quarter as Kerry pushed the gap out to seven, but the introduction of Keelan Molloy and Daniel McKernan sparked Antri to life as they narrowed the gap to three, but Kerry managed to stay ahead with Fionan MacKessy hitting back-to-back scores.

As news filtered through that Carlow were ahead in Tullamore, Kerry looked in a good place as Boyle, Ross and Gavin Dooley pushed them into a seven-point lead, but then this game took a huge swing towards Antrim in stoppage time as Keelan Molloy fed Conal Bohill to blast home.

Jordan Conway responded with a point for Kerry, but then Neil Mcmanus found the net with a low shot in traffic that left just one between the teams.

Boyle's 15th point of the day settled Kerry, but a point from McKernan left it a very nervy finish, yet as they did all afternoon, Kerry found an answer with Paudie O'Connor sealing their victory and place in the final with the last act of the game.

"We banned talk of what was going on elsewhere as our focus was on today and getting the result," said Kerry manager Stephen Molomphy.

"Even if the results didn't go our way, we wanted to finish on a high. Starting off with a loss against Down, it was difficult to get back and we did, but the result against Offaly set us back. It was just important to finish on the right note whether we won or not, but we got a performance.

"It was a great game and Antrim tried out some new guys there. It will be a different team we face in two weeks' time and even here today we are keen not to celebrate anything as we don't want to be giving Antrim any ammunition.

"The big game is in two weeks' time and we have a lot of work to do. It was a great game but conceding the two goals at the end was poor enough.

"Antrim are just getting going and their focus will have been on the final, but we'll regroup and get ready for that."