Leisure rising from the ashes ahead of cup tie 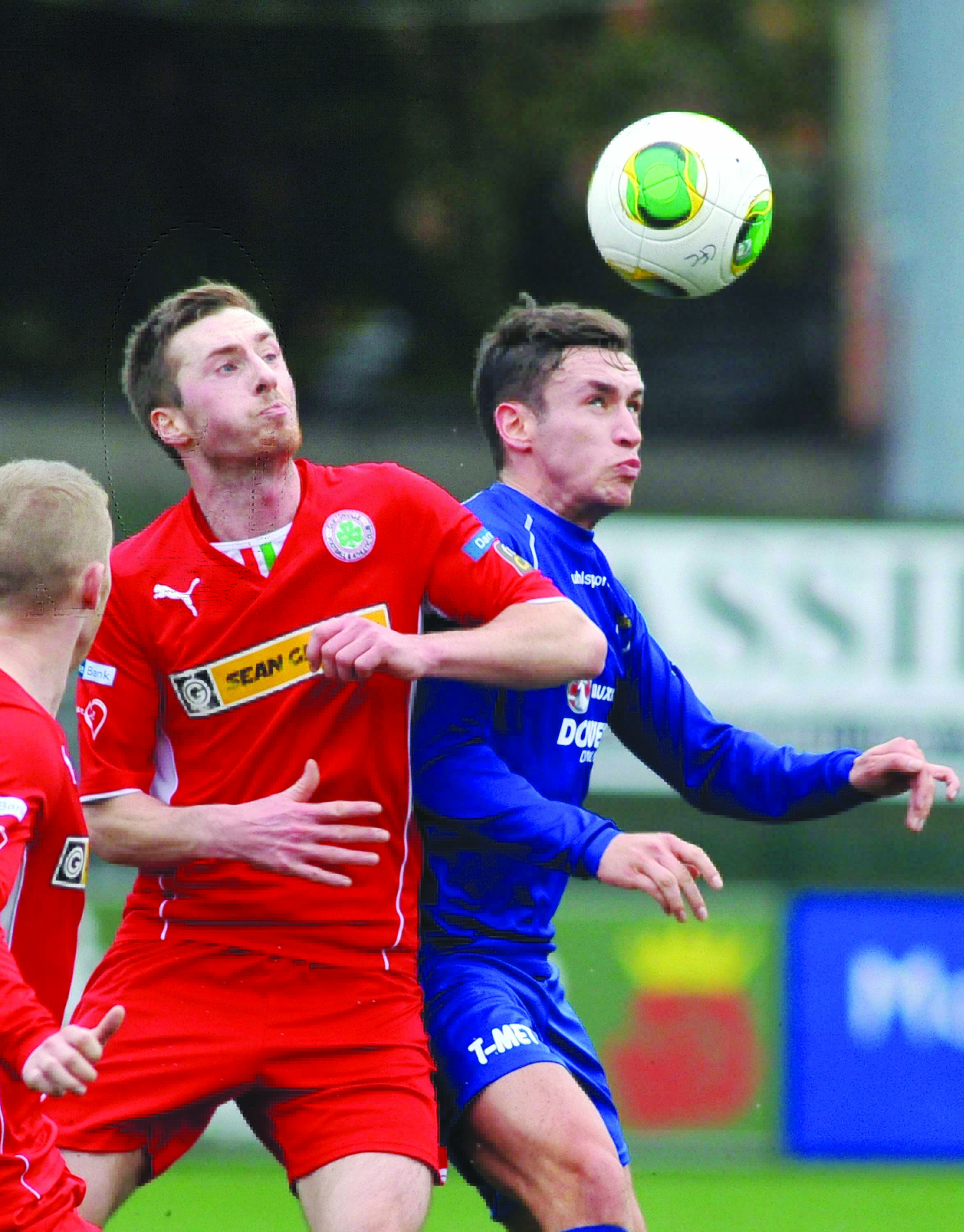 Ciaran Doherty (left), in action for Cliftonville, has signed for Sport and Leisure Swifts and could be in the squad to face Institute

FESTIVE spirit was in short supply this time last year as arsonists destroyed the clubhouse at Sport and Leisure Swifts.

One year on, the Glen Road side are preparing for an Irish Cup fifth round tie against Institute and manager Pat McAllister believes a cup run would galvanize everyone at the West Belfast club.

“This time last year, we were sitting with the clubhouse burnt down,” said McAllister.

“Everybody was all doom and gloom and wondering if we were going to continue.

“We have played a lot of games away from home this season because our pitch wasn’t ready.

“We have are trying to improve the club as a whole each season. We finished fourth last season and if we can finish near or above that this season, we will be pleased.

“All credit has to go to the players – they are buying into what we are trying to bring to the club.

“So many people have worked their socks off behind the scenes and, as I have said to the players, the only way we can repay them is by keep putting in the same effort we are, week in, week out and win games for them.”

This season’s woes pale in comparison to the problems the club faced a year ago. A lack of games due to postponements is McAllister biggest concern ahead of Saturday Irish Cup clash at Glen Road Heights (1.30pm).

The Swifts haven’t been in action since their round four win over Dergview – which was also rescheduled after a waterlogged pitch forced a postponement.

Last Saturday, Sport and Leisure were due to face Mossley FC in the second round of the Intermediate Cup but the game has been put back until Saturday, January 16.

“It is obviously disappointing not to get a game last Saturday,” said McAllister. “We tried everything we could. We tried to move it to their pitch but there was nothing we do. Four or five of the boys got a game for the seconds. It is to be expected at this time of the year but it is frustrating especially coming off the back of a good win against Dergview in the last round. But we will be good to go on Saturday.

“It is also frustrating because the players are sacrificing things over Christmas and the New Year and then the game is called off.

“We just have to get the head now and get on with it.”

McAllister admits he was frustrated at drawing Institute in the fifth round having lost to the same opposition 5-2 in the second round of the League Cup earlier this season.

However, the former DC boss believes a continued run in the Irish Cup could be the catalyst for another strong finish in the league.

“It would be massive for us,” added the Swifts boss.

“Myself and the coaching staff sat down and had a meeting on Saturday after the game was called off. Apart from the Steel and Sons Cup when we took our eye off the ball, we couldn’t have asked any more of the players.

“We went up to Institute in the League Cup. It was one of those games. It was midweek and before we knew it, we were 3-0 down.

“We know what to expect from them – they are a good side. They will be favourites but our performance against Dergview was probably our best since I took over.

“It was frustrating (drawing Institute) because you want to draw one of the big teams to give the boys a glamour day out. But it is a winnable game – Dergview are sitting above Institute in the table.”

McAllister will be without the services of both Liam Carland (holiday) and James McGrogan (suspended) for Saturday’s Irish Cup tie.

However Ciaran Gargin, Darren Gallagher and Gary Largey are all expected to return having missed the Dergview win.

The Sport and Leisure manager also confirmed the signing of former Glenavon and Cliftonville midfielder Ciaran Doherty earlier this week. McAllister is hoping to include Doherty is his squad to face Institute on Saturday.