Lives remembered: Helen lost husband in bookies massacre but always thought of others 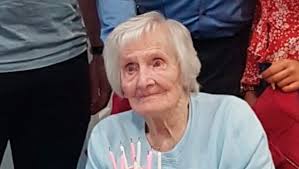 Helen Duffin managed to look after her family while seeking justice

THE son of one of the victims of the Sean Graham bookmakers' massacre has paid tribute to his mother following her death.

Helen Duffin passed away at Arlington Nursing Home in South Belfast at the end of April, just two days after marking her 92nd birthday.

Mrs Duffin was the campaigning widow of Jack Duffin, who was one of five people murdered by the UDA in the bookmaker’s shop on the Lower Ormeau on February 5, 1992.

She was among the relatives of those killed who had tirelessly campaigned for an investigation into the mass shooting.

Originally from Forkhill, Mrs Duffin (neé Toal) moved to Belfast as young woman to work as a nanny.

She married her husband Jack in 1948 and would go on to make the Ormeau Road her home, where she raised her three sons, Martin, Paddy and Tommy.

Paying tribute, Tommy described his mother as a “strong” woman who “would’ve gone to the end of the earth” to help others.

“She was very quiet in her own way,” he said.

“After my father was shot in 1992 she just got her head down and got on with it. She basically just looked after the family.

“She was very strong, she wouldn’t have shown much emotion and I think she was trying to protect the rest of the family by doing that.

“That’s the type of person she was – she just lived for her family.”

St Malachy’s Church was a big part of Mrs Duffin’s life, and Tommy told how she would always insist she was “alright” so long as she could get to Mass.

“That’s all she worried about,” he said. “She was the sort of person that when she was 75 she was running about looking after the 65-year-olds – she always preoccupied herself with other things rather than dwelling on what had happened.

“Right up until about a year ago she would have still asked me how our case was going.

“She was always involved in women’s groups and community stuff, and trying to help people round her. Even when my father was alive she had that persona. She would’ve gone to the end of the earth to do someone a good turn. That was just her.”

Predeceased by her son Martin in January 2013, Mrs Duffin is survived by sons Tommy and Paddy, 12 grandchildren and great grandchildren.