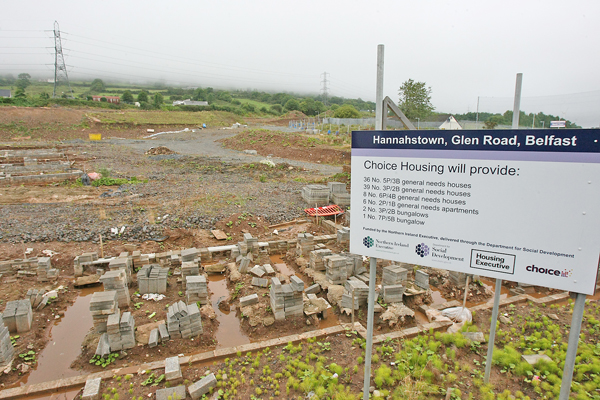 OVER a year after work halted on badly-needed new social homes on the Glen Road after the collapse of the contractor, the ghost estate still stands desolate.

Work on 92 homes adjacent to the Glen Road Travellers site at the foot of the Black Mountain was halted in July 2016 after the company contracted to do the work went into administration.

The project has been plagued with difficulties since its inception. 240 homes were originally earmarked for the site but a planning wrangle which involved claims of Belfast City Council holding a “ransom strip” to bump up the cost of land threw a cloud over the scheme and the number of housing units was cut drastically.

Now housing association Choice say they’re ready to forge ahead with the stalled project and is seeking a contractor to take up the baton. They’re confident that workers will be on the site within a matter of weeks.

A local councillor has welcomed news that work is to resume on the partially-completed project and said people in need are “crying out” for homes in the district.

Choice Housing has confirmed that it has yet to appoint a contractor to resume work on its Glen Road Heights social housing development.

Contractors T&A Kernoghan were appointed to construct 92 homes at the Glen Road and work began on site in March 2015. Builders have long since downed tools due to a number of complications, effectively rendering Glen Road Heights a ghost estate.

In February 2016 planning approval for the site was rescinded following a judicial review into the allocation of land.

A spokesperson for Choice Housing said: “The original planning application has now been re-assessed and planning approval was granted on 20th June 2017. Choice is currently working to procure another contractor to complete the construction of this development. We anticipate that construction works will re-commence on site in autumn 2017.”

Local Sinn Féin Councillor Emma Groves welcomed the news that planning permission has been granted, and stressed the need for social housing.

“I’m glad to see that the development of these homes is one step closer to being started,” she said. “This area is in desperate need of social housing, so the sooner work begins the better.

“The number of cases we deal with in the constituency office around housing is astounding. People are crying out for homes,” she added.