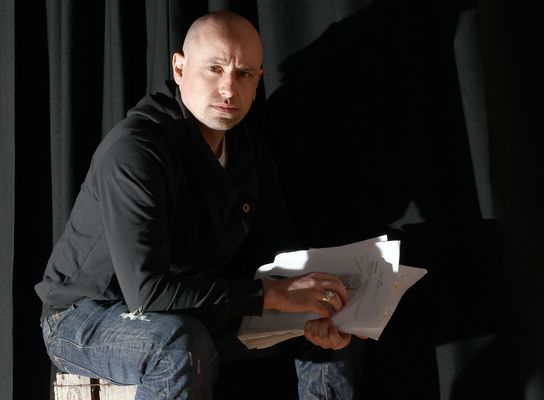 LOCKDOWN: Tony Devlin's is one of six monologues as Gaeilge presented by Aisling Ghéar

Going out on its social media Instagram site, the series is comprised of stories of everyday life and of life during Covid-19 lockdown. Among the work, the Irish language theatre troupe has brought together Dave Duggan and his piece, Edith’s Perm, a story of how Edith, a widow who was married to Harold contemplates a disastrous hair do and the scandal that rocked her local church. Nuala Ní Neill’s Triangle tells the story of Martha who moves in with her mother at the start of lockdown and the audience joins her as she plumbs the highs and lows of being a daughter and the rediscovery of the connection of family and community.

Also lending his talents is Brassneck’s Artistic Director Tony Devlin who told how his work Goodfella was “one of the hardest things I’ve ever had to do”.

“This fella contemplates what’s the best thing about lock up, the time to reflect, to look back, to look forward and the big picture,” explained Tony.

“Aisling Ghéar had the idea, early in Covid, that we should jump on the idea of doing monologues as Gaeilge, that would reflect our time as artist over the past three months.

“Initially they wanted me to write something, a ten-minute monologue, which I did and they loved it. They phoned me back saying could I record it for them, basically I’m the actor, set dresser, lighting designer, fingers crossed people will enjoy it,” he said.

“Goodfella is a piece about a guy who has always dreamed of being one thing in his life, but as life always dictates, it turns out a different way. It’s a little bit of an homage to the film Goodfellas; there is a twist at the end which shows how his life went. All I’m going to say is it starts off in this guy’s kitchen, I’m wearing Sesame Street pj’s and it’s 8am,” he laughed.

Tony said that the process of creating the monologue was a tough one due to working on his own.

“It’s one of the hardest things I’ve ever had to do. Unlike being in a rehearsal room, when you are with a director, the stage manager, other actors, you are on your own here, it was just me and the camera. I was set designing myself, I was making sure that every take looked the same as the last one, it was quite stressful. It’s not something I ever want to see as the norm – roll on getting back into a theatre rehearsal space and collaborating with other creatives.

“As I said I hope people enjoy the work and what Aisling Ghéar have brought together.”

Aisling Ghéar’s monologue series can be viewed on their Instagram page.