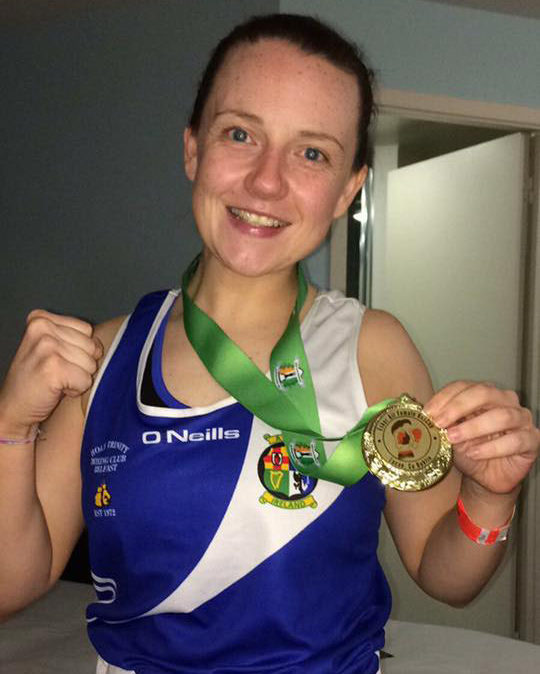 THE transition from boxer to ex-boxer can be a difficult process for anyone who has dedicated their life to the sweet science.

The training, discipline, buzz, pain and glory simply can’t be replaced, whether a world champion or amateur novice.

Some drift away from the sport altogether, while for others, there can be no escape and they find themselves back in the gym holding, rather than punching, the pads as they move into a coaching role.

That has been the journey for former Holy Trinity boxer, now boxing coach Louise Welsh.

Her story has been superbly told in mini-documentary ‘The Void’, produced by Sideline Films as part of the BBC’s True North series and available to watch on the BBC iplayer.
Having achieved all she could in the ring, Louise decided it was time for a new chapter as a full-time coach with the IABA, but the change was far from easy as she came to terms with being an ex-boxer.

“It was hard at the beginning to say you’re not competing,” she admitted.

“You have a bit of a lull, but once you get back into the coaching you feel like you’re getting it back again while giving back.

“I have boxed my whole life. I’ve been around it the whole time so I could never just walk away from boxing completely when I stopped competing. It’s always going to be there so there’s no getting away from it and now I work in it, so it’s morning, noon and night boxing for me.”

Louise finished her career in the ring highly decorated with several Antrim and Ulster titles as-well-as Irish Intermediate titles. There were also gold and silver medals from the Celtic Box Cup, while her final act was to take gold at the Esker Box Cup.

“I took silver in the Celtic Box Cup and thought I didn’t want to finish like that, so I decided to give it one more year to try and win a gold, so I picked the Esker and won it.

“I’m working full-time and it’s harder to keep the weight down once you hit your 30s, but I’m happy with what I did in boxing and just felt it was my time to move on.”

While nothing can ever replace the thrill of competing, giving back has its own rewards and Louise has thrown herself into coaching and inspiring the next generation of female fighters.

The landscape has changed since she first laced up the gloves with more females involved in the sport and therefore availing of greater opportunities thanks to the exploits of Katie Taylor who has moved women’s boxing into the mainstream.

“I go around all the schools in Belfast introducing kids to boxing,” she explained.

“It’s a non-contact programme, but it’s a good introduction and we then link up with local clubs whose coaches come into help us. We then get the kids from the school programme into the clubs.

“My main focus is females and there have been a lot more females come into the sport in Belfast, which is brilliant.”

It also helps to call upon the expertise of her club coach, Michael Hawkins.

“He is a second father figure to me in boxing and you aren’t going to get a better level of coaching in Belfast,” she added.

“Belfast is the home of boxing, so the numbers are there.”

In the documentary, Louise explains she was always quiet and somewhat shy, so how did she agree to appear in front of the camera?

That was down to her fiancé Ally McKenzie who is the man behind Sideline Films and who has produced content for Box Nation and ITV Box Office to name a few: “He knew I was finishing up and the Esker Box Cup was coming up, so he was filming me for that and then sold it to me to do a wee documentary. I think he tricked me into it!”

‘The Void’ is available to watch on BBC iplayer as part of the True North series.