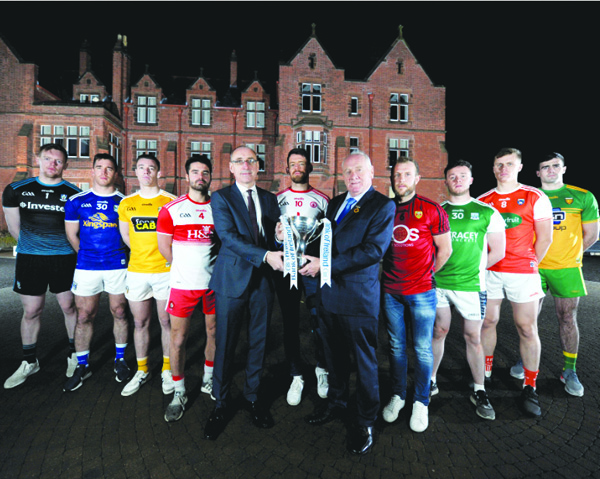 Antrim captain Declan Lynch, pictured third from left at the recent launch of the 2020 Dr McKenna Cup, knows the Saffrons must make a strong start to the season as they seek to challenge for promotion from Division Four in the coming months

IT’S the beginning of a new season for Antrim’s footballers on Sunday when they host Fermanagh in their opening Dr McKenna Cup game at Ahoghill (2pm).

Ulster’s pre-season competition hasn’t always been kind to the Saffrons, but a new year brings a fresh start and Lenny Harbinson’s men will be hoping to start on the positive before facing Down in Newry on Wednesday evening (8pm).

The McKenna Cup will not be top of the list of priorities for Antrim in 2020 – that will be reserved for their assault on promotion from Division Four in the National League – but they will still like to build some momentum heading into that League opener at home to Wexford on January 26.

“It’s about being competitive, but we’re looking to win games in the McKenna Cup and an extra game (semi-final) could bring you on that extra bit,” said captain, Declan Lynch.

“Good, competitive competition will set us up well for Wexford (in the league) on January 26. It’s a tough group, but one we are looking forward to getting stuck into so we can see what we can do.”

Much has been spoken about the second tier Championship that will return this year.

Antrim remain the last winners of the old Tommy Murphy Cup that was last contested in 2008 and many of the critics of this new Tier Two competition believe it is just a rehashed version of that competition.

Time will tell if it will receive the necessary buy-in from players and supporters to make it a success, but Lynch had adopted a ‘wait and see’ approach although he insists Antrim’s main target will come much earlier in the year.

“If it’s done right and given the platform it deserves then I think it can be a positive,” he opined.

“If it’s going to just be a ‘Tommy Murphy part two’ then I don’t think it will work.

“But our focus will be on the league and when we get to the stage of looking at that (Championship) then we’ll worry about it, but the only thing we’re thinking of is getting out of Division Four.”

Antrim’s Senior Football Championship in 2019 could certainly be considered a success given the dramatic finishes and replays that resulted in the gaze of the country fixed on Antrim club for the first time in a while.

It ended in disappointment for Lynch’s Lámh Dhearg who fell to Cargin after extra-time in the replayed finals having come through three games at the semi-final stage.

What last year’s competition showed is that there is the talent in Antrim and that has led to some new and not so new faces added to the panel for 2020 including Tomás McCann and Lynch’s club-mate Paddy Cunningham who remain some of the best forwards in the county.

“We just came out on the wrong side of it, but fair play to Cargin – they’re county champions and deservedly so,” he recalled.

“I’ve always said it and will continue to, but Antrim has great talent throughout and I think that was shown in the county championship.

“Lenny has unearthed some new talent and some old faces coming back, which is great because it leaves us in a position where the panel is stronger and boys are fighting for position. As a county, that’s where you want to be.

“Paddy captained Antrim in an Ulster final in 2009 and last year, a bit of experience may have got us over the line in a few of the games.
“That bit of experience and craft with the two lads coming back in will give us a wee lift. If they can add something – and I know they can – then Antrim will be in a better position.”

With no universities in this year’s Dr McKenna Cup due to the earlier start of the Sigerson Cup, Antrim will have one less game in the group stages, so a semi-final would be most welcome to get another competitive game in before the League begins.

That remains Antrim’s focus this year having missed out on promotion over the past two seasons and playing teams who are higher up the ladder in early January certainly doesn’t hurt in terms of preparation.

The plan is to be primed for action against Wexford so opening the year with a win over Fermanagh this Sunday will help get them off on the right foot.

“It’s where we don’t want to be; we want to be climbing the leagues but we’re there for a reason and we have to rectify that this time.

“The preparations will really start in terms of intensity when the McKenna Cup starts.

“All of the other eight counties are playing at a higher standard so this competition gives us the opportunity to test ourselves and not only get physically ready, but mentally ready for the league.”