Magpies soar past Carryduff to retain Down title 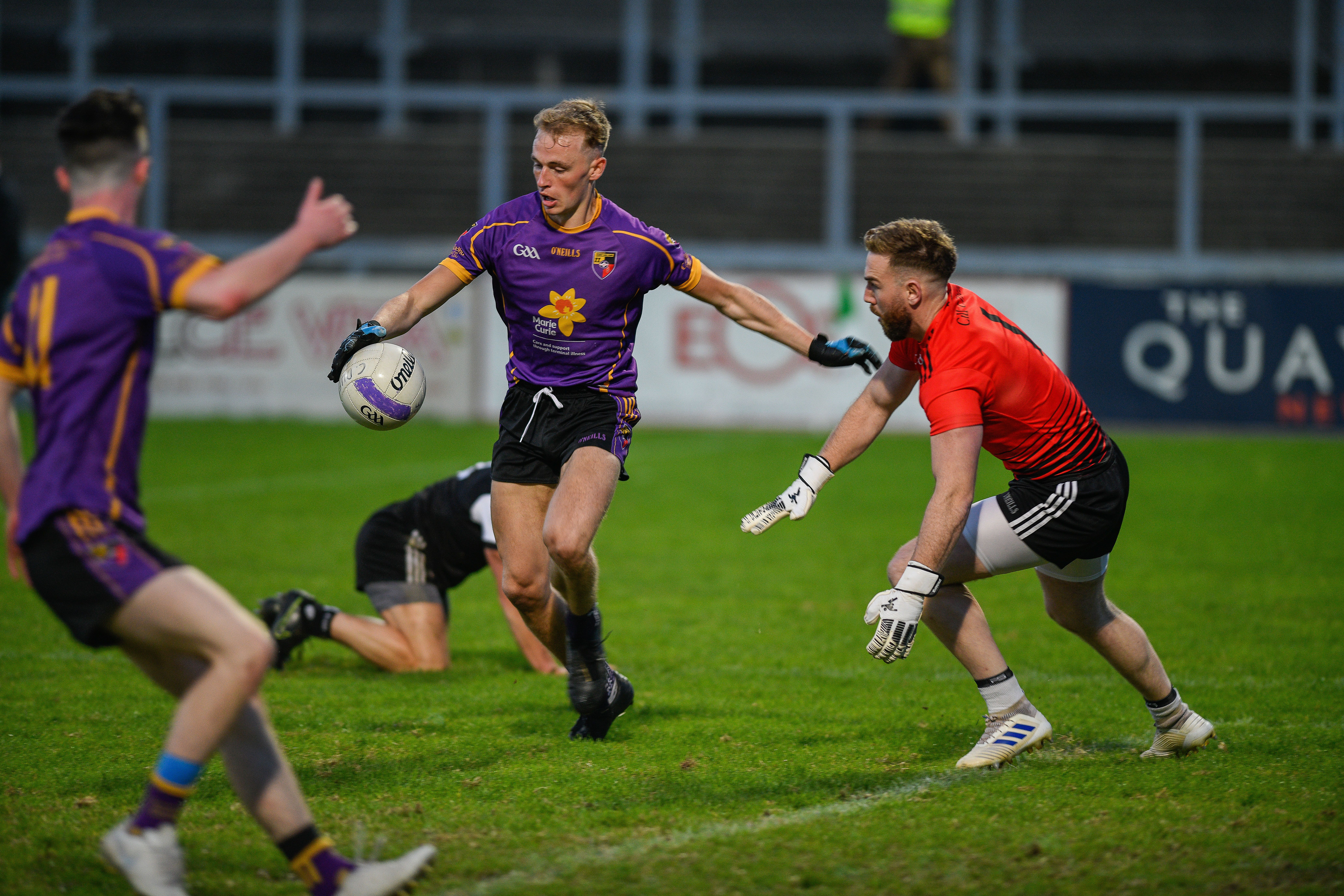 Ronan Beatty rounds Kilcoo goalkeeper Niall Kane late in the first half, but the Carryduff attacker couldn't keep his shot down and had to settle for a point Maurice McKey

CARRYDUFF suffered a seven-point defeat at the hands of Kilcoo in their first-ever Down SFC final at Páirc Esler in Newry on Sunday night as the defending champions collected the Frank O’Hare Cup for the eighth time in nine seasons.

Their experience at this stage was in stark contrast to a youthful Carryduff side, themselves three in-a-row Down U21 kingpins, and it told in the end.

Kilcoo rode their luck at times in the first half, but they upped the ante on the restart and showed all their class to pick off points from all angles with eight different players contributing to their winning tally of 0-16.

Carryduff, on the other hand, were reliant on Ronan Beatty for the bulk of their scores having lost the services of star attacker James Guinness before throw-in.

The Down panellist failed to recover from a hamstring strain sustained in the dying minutes of normal time in their extra-time semi-final win over Ballyholland a week earlier.

As underdogs, Carryduff could ill-afford to be without one of their key players, but they played with the kind of intensity and endeavour that had brought them to the biggest day in the club’s 49-year history in the first place.

They were level at 0-3 each at the first water break as two points from frees from Ronan Beatty and a point from Daniel Guinness matched early scores from Kilcoo’s Ryan Johnston, Aaron Branagan (free) and Eugene Branagan.

Carryduff were just three points in arrears at half-time, but it might have been a different story had Ronan Beatty not fired under, rather than over the crossbar on 30 minutes after rounding Kilcoo goalkeeper Niall Kane.

Kilcoo responded with two points from Ryan Johnston and Paul Devlin to take a 0-7 to 0-4 lead into the interval.

Within 90 seconds of the restart, Kilcoo stretched their lead to five with back-to-back points from Shealan Johnston and Eugene Branagan.

Beatty and Devlin then exchanged frees as the game opened up and Carryduff got themselves back into contention with a couple of classy points.

Full-forward Beatty landed a stunning point from play before John McGeough converted a free from 35-yards after Guinness had been fouled.

However, that was as good as it got for the South Belfast side as Kilcoo moved up another gear to close the game out in ruthless fashion.

Midfielder Dylan Ward fired over the bar before the impressive Eugene Branagan fisted over from close range.

Moments after McGeough fired wide, Kilcoo went straight down the pitch with Devlin finishing the move to put his side 0-13 to 0-7 ahead midway through the second half.

The Down and Ulster champions showed no signs of easing up as points from defender Ceilium Doherty and another from Ryan Johnston had Mickey Moran’s side eight clear.

Goals were now required by Carryduff at this stage, but getting through Kilcoo’s defence was proving almost impossible with Nial McEvoy and Conor Laverty both dropping back to prove extra cover.

Substitute Peter Loughran had a half chance from 20-yards out blocked by Ryan McEvoy shortly after his introduction, but several hopeful punts into the danger area were well cut-out by the Magpies.

Beatty capped a fine individual performance by landing his side’s final two points of the night to finish as the game’s highest scorer with 0-7 to his credit.

Carryduff skipper Josh Connery was another who gave all to the cause and he’ll look to lead his team back to a county final in the not too distant future.

Yet, having dispatched last year’s finalists Warrenpoint in the semis and after Sunday night’s calculated performance against an up-and-coming Carryduff side, Kilcoo’s grip on the Frank O’Hare Cup is as firm as ever.