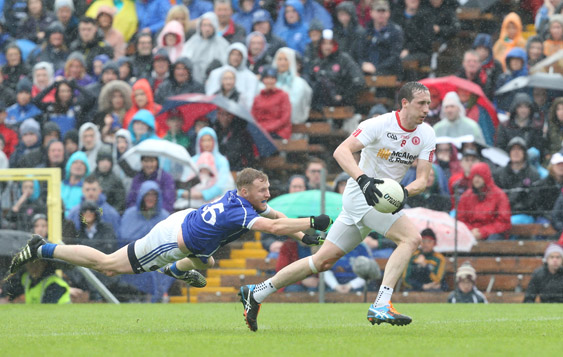 Tyrone's Colm Cavanagh breaks away from Cavan's James McEnroe during their drawn Ulster SFC semi-final. The Red Hands can beat the minus three-point handicap at Evens this Sunday at Clones

WHAT a weekend of soccer that was...

Out went Spain and England without so much of a whimper on Monday while Ireland courageously were beaten by hosts France on Sunday and Wales saw off the challenge of Michael O’Neill’s boys on Saturday.

We are still baffled how Portugal have reached the quarter-finals and still not won a game in 90 minutes and they go into the Poland game on Thursday night as the favourites.
Hosts France lead the Sean Graham ante-post market at 11/4 with Germany next best at 3/1 while the slicky Belgians look the stand-out bet at 4/1 on the other side of the draw.
Let’s get stuck into the quarter-finals and we start with the Poland v Portugal game tonight and we are all over the draw here at 2/1.
Portugal have not impressed and Poland are tough to break down and are strong on the flanks and we are sitting on the fence with the draw and backing both teams to win on penalties at 11/1.

On to Friday night we have the Wales v Belgium game and we think a easier game to call than the Poland/Portugal tussle.
The Welsh have been brilliant in France but, despite having a good record against the Belgians in the qualifiers, we think this could be the end for Chris Coleman’s team.
Edin Hazard looked unplayable against Hungary and we expect him to steer Belgium (8/11) to the final and taking a 3-1 win at 12/1 and that man Hazard to open the scoring - scorecast pays 55/1.

The best game of the quarter-finals is on Saturday night with the mighty Germans taking on the Italians and again we head to that fence for a seat - the draw at 2/1 looks the bet in this one and again we will be punting on both teams in a penalty shoot-out at 11/1.

The last quarter-final sees hosts France (2/5) take on the surprise team of the tournament, plucky Iceland in the capital on Sunday night.
We put up Griezmann/France double at 20/1 at the start of the tournament and will be hoping that he can get another few goals on Sunday night and hopefully the French have did their homework on Iceland.
We are taking Griezmann (4/1) to open the scoring and a 3-1 France win (12/1) - the scorecast pays 55/1.

Horse Racing
Just about room to get a Saturday trixie up and My Dream Boat (3/1) looks solid bet in Eclipse while Endless Time (5/1) can take the Old Newton Cup at Haydock.
Making the trixie up is the progressive Desert Encounter (7/1) who can take the Lancashire Oaks after winning at Windsor last weekend.


GAA with Paddy Tierney
The 2016 Football Championship took a while to get going but a couple of thrilling draws in the Ulster SFC has captured our imagination.
This weekend, Monaghan, Donegal, Tyrone and Cavan will bid to reach the provincial decider on Sunday, July 17.
Last weekend, we tipped Monaghan to defeat Donegal but the Farney needed a late equalising free from Conor McManus to earn a replay.
However, the defending Ulster champions can do the business at the second time of asking and Malachy O’Rourke’s side are Even money again on Saturday.
Tyrone can join Monaghan in the final at the expense of Cavan in Clones on Sunday. The Breffnimen scored three goals against Mickey Harte’s side the last day but there was an element of good fortune about two of the goals and Tyrone also missed two chances late on to nick the win.
The Division Two champions could end up winning this comfortably, like they did when the sides replayed at the same stage in 2005, and they are Evens to beat the three-point handicap.
Tyrone’s rivals Armagh are also back in action this Saturday despite being knocked out of the Championship by Laois two weeks ago.
The Orchard County have been reinstated after Laois made too many substitutes but Kieran McGeeney has a host of injury concerns ahead of the rematch and could be without the likes of James Morgan, Ciaran McKeever, Mark Shiels, Ciaran O’Hanlon and Ethan Rafferty.
Armagh don’t have a strong panel and Laois can prevail once again and beat the minus two handicap at 10/11.
The Munster Senior Football Championship takes centre stage on Sunday with Kerry facing Tipperary at Fitzgerald Stadium.
Home advantage certainly is a big plus for the Kingdom, who are 1/25 favourites for the match.
It is a novel pairing but Tipp will relish the prospect of taking on Kerry in their own backyard.
The Premier County are an up-and-coming team. They gave Tyrone their fill in the Qualifiers last year having lost out to the Red Hands in the 2015 All-Ireland U21 final.
Tipp pulled off the shock of the Championship thus far when they defeated Cork 3-15 to 2-16 in the Munster semi-final.
While I don’t expect Tipp to win, they are good value at 10/11 with a 10-point lead.

Punters Guide is on Facebook/Twitter daily.