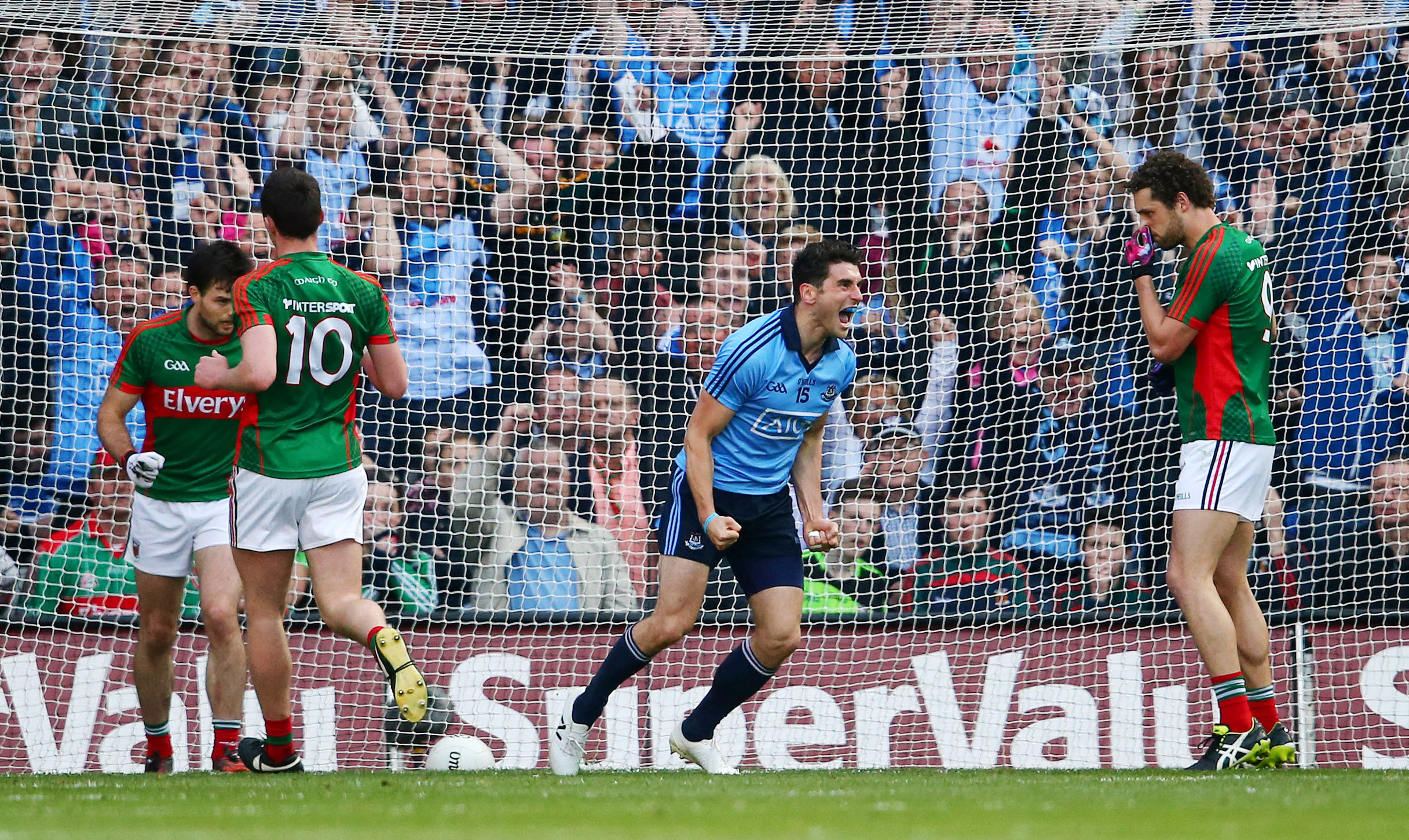 FIRST GOAL: Bernard Brogan celebrates after scoring a goal against Mayo in last year's semi-final replay. We fancy the Dublin ace to strike for the first goal in the All-Ireland football final on Sunday at 13/2.

BARRING a replay, the 2016 GAA inter-county season will draw to a close around 5pm on Sunday evening when Dublin beat Mayo in the All-Ireland Senior Football Final in Croke Park writes Paddy Tierney.

No point in beating about the bush with this one. I tipped Dublin to win the All-Ireland at the start of the year and I see no reason to jump ship now.

Kerry went down fighting in the semi-final but it took two goalkeeping errors from Stephen Cluxton get them back in contention in the first half.

Dublin could probably win on Sunday without Flynn and Brogan playing well, but if the likes of Cillian O’Connor and Aidan O’Shea are shackled, it will be lights out for Mayo. That’s the key difference between the sides.

Dublin have the kind of strength-in-depth that other counties can only dream about.

As a punter, you have to be cautious when backing Mayo, otherwise your wallet and your sanity will suffer.

Only they will know how they haven’t managed to win Sam Maguire in recent years but it has nothing to do with the so-called curse placed on the county by a priest in 1951.

It has more to do with the team repeatedly failing to fire on the big occasion. Even when they have, they have come up against a great side, like Kerry in 2006.

I feel the same fate awaits Mayo this Sunday and Dublin are worthy 4/11 favourites.

While that price won’t appeal to many punters, I like the look of the sides to be level at half-time and Dublin to win at 10/1.

Mayo will be hell-bent on making life difficult for the Dubs in the opening stages, but I expect Dublin’s superior fitness and bench to tell in the end.

I also like the odds offered on the aforementioned Bernard Brogan scoring the first goal at 13/2.

By his own high standards, Brogan has been quiet this summer and has been relatively poor in the last two games.

I don’t expect him to have three bad games in succession and he has a knack of playing well against Mayo and scored 2-3 (2-2 from play) when the sides last met in the final in 2013 and also bagged a goal in the win over Mayo in last year’s semi-final replay.

At the time of writing, no odds were offered on cards being dished out by referee Conor Lane, but I would expect at least one red in Sunday’s final given the history between the counties.

Lee Keegan and Diarmuid Connolly have a habit of sailing close to the wind and could be the best bet to be sent off or pick up the game’s first booking.

On to the weekend soccer and only a 5/1 early snipe double to show for last week’s efforts with Brighton killing the 12/1 acca - we dust ourselves down and go again, so let’s hope for more than a few winners this weekend.

We start with the quad and selections in the Championship this weekend. We start with Barnsley (11/8) who have already five wins on the board and look to make it six with a win at Oakwell over Reading while Aston Villa (7/5) can kick-start their season with a win at Ipswich.

Wigan (11/8) can make home advantage count when they host Fulham, while Norwich (6/5) can take the bragging rights in the East Anglian derby.

10/12 in Saturday and then 11/12 on Tuesday night with our online bet - is this the weekend for the goalrush?

We suggest you sit on the fence and take draws in the following League One games: Shrewsbury v Scunthorpe, Swindon v Bury and Walsall v Bolton.

Get on Arsenal (8/15) to start the odds-on acca bet and the Gunners should take maximum points at Hull.

Newcastle (4/6) are flying and should see off Wolves at St James’ Park, while Bradford (4/5) could well go top if they can beat Bristol Rovers in League One.

Staying in League One and Charlton (8/11) looked nailed on for a win at The Valley when they entertain AFC Wimbledon.

Let’s hope it’s four in the bag as we head to the late kick-off at Goodison to complete the quad. Everton (8/11) have started the season well and can build on that easy win at Sunderland on Monday with three points at the expense of Middlesbrough.

What a game we have on Friday night at Stamford Bridge when Liverpool lock horns with Chelsea.

Singles and a scorecast are recommended for the Friday night game.

We finish with the weekend racing and the Ayr Gold Cup is always a tough nut to crack for punters. If Orions Bow (14/1) can get his early season form back, then he looks each-way value in this sprint.

Down at Newbury we have the Mill Reef Stakes and Mokarris (5/4) looks a solid bet in this, while Scarlett Dragon (9/1) could strike in the Dubai Duty Free Handicap.