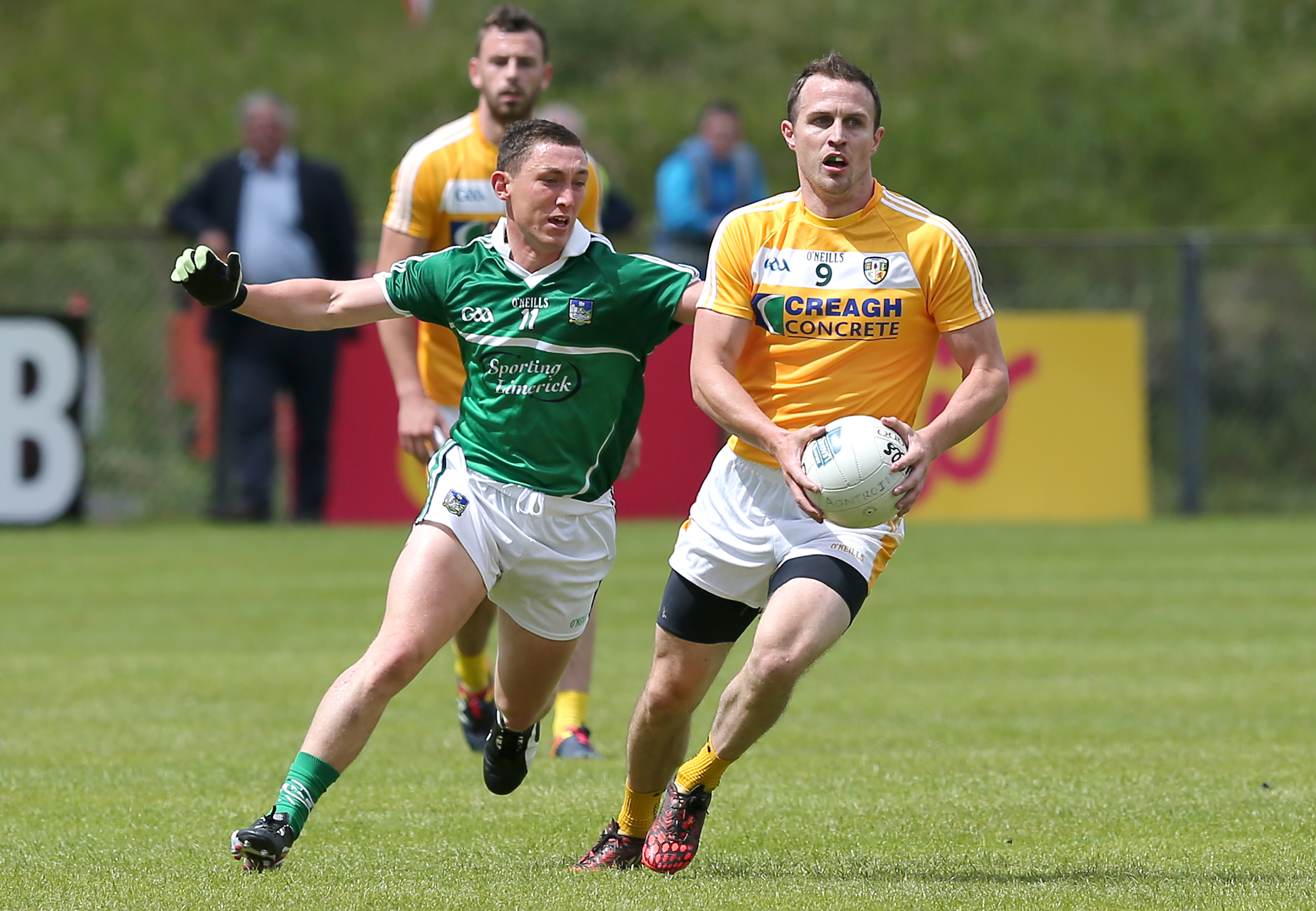 Michael McCann, pictured in action against Limerick’s Peter Nash during Antrim’s Qualifier defeat at Corrigan Park in June, insists he hasn’t retired from inter-county football despite opting off the Saffron squad for the forthcoming season due to work commitments

MICHAEL McCann has dismissed reports that he has retired from inter-county football after opting off the Antrim squad for the 2017 season.

The Cargin clubman says work commitments means he will be unable to play for the Saffrons for the forthcoming season.

However, McCann insists press reports saying he has retired are wide of the mark and he is open to the possibility of returning to the squad if or when his circumstances change.

“I am not retired and I never said I was,” said McCann. “I don’t know where that came out of. At this current moment in time, I am not playing. “That doesn’t mean I am retired. “At the minute, based on work and different things, I won’t be available for 2017 but things can change.

“I don’t know where this retirement thing came from because I never mentioned it. “I was asked by the management about playing this year and I said I can’t commit at the minute. That’s how it was left.

"Maybe some people have picked it up wrong or said, because I am 31, that’s me finished. “Will I play for Antrim again? I don’t know but I never said I was retired.”

Antrim begin their 2017 campaign with a tie against St Mary’s in Section B of the Dr McKenna Cup at Corrigan Park on Sunday, January 8 before games against Monaghan (home) and Fermanagh (away).

In February, they will compete in Division Three of the National Football League after gaining promotion last spring while the Saffrons travel to Ballybofey to take on Donegal in the first round of the Ulster Championship.

Antrim’s squad for the forthcoming Dr McKenna Cup includes a host of newcomers while a number of players, including Matthew Fitzpatrick (St Mary’s) Niall McKeever and Ricky Johnston (Ulster University) will line out for their respective university sides.

Additionally, Brian ‘Bam’ Neeson is unavailable due to his soccer commitments with Carrick Rangers while Ballymena’s Sean McVeigh isn’t expected to return to action until late February as he continues to recover from a groin injury.

While refusing to rule out a return later in the season, McCann doesn’t envisage himself playing for Antrim during the forthcoming campaign. “I am not a fan of coming back in the middle of the season,” added the Cargin midfielder.

“Maybe if it was early enough – say March or April time. If work was slack, I would consider it. “I just don’t know. I would like to keep my options open. “I missed a lot of sessions last year because of work and I wouldn’t do that again.

“If things change there is no reason why I wouldn’t go back.”

When pressed if he would like to play for Antrim again at some point in the future, McCann replied: “I would yes – 100 per cent.”

While his own inter-county future remains uncertain, McCann believes there has to be an overhaul of structures within the county to allow the Saffrons to progress to the next level and bring young talent through the ranks.

“I thing there has to be buy in at all levels. There is plenty of buy-in from management and players,” said McCann.

“I think Antrim, as a county, needs to invest. They need to have the best players playing. “The management is fine but some clubs have a better set-up than the county. That has to change.

“I have been there for 12 or 13 years and I have never seen any difference. Nothing has ever changed. “We have no home pitch. We now have a training facility (Dunsilly). Maybe that will change things. “People have to want to play for Antrim as well. “Obviously the guys that are there want to play but there are other guys out there that don’t. “Not all the best players are playing for Antrim.

He added: “Any coaching that is done in Antrim is done by the clubs. “The county as a whole, doesn’t put enough into the structures at underage. “The club coaching is, by luck, getting the odd good player. That can’t go on.

“St Mary’s (CBGS Belfast) compete in the MacRory but for years no Antrim team competed in the MacRory Cup.” “Antrim are so far behind in terms of underage development.

“Antrim had a good minor team last year but that was more to do with the underage set-up at the likes of Creggan and St Enda’s rather than anything that Antrim are doing with development squads.”