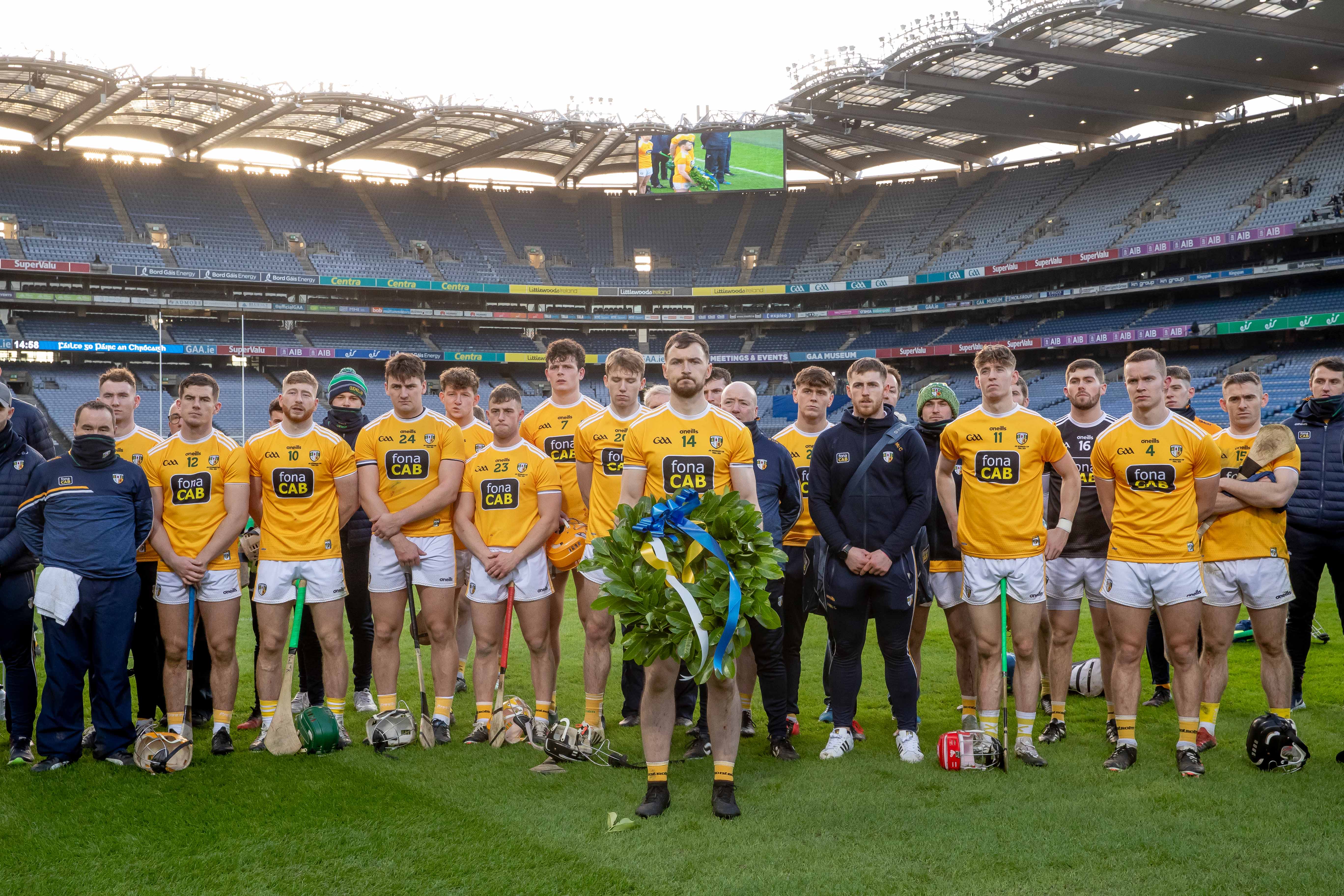 CONOR McCann has travelled the long road for Antrim over the years and experience some dark days, but under the winter sun on Sunday, the pain of past heartbreaks evaporated for the Kickham's, Creggan man.

The 28-year-old was on the end of an All-Ireland U21 final hammering by Clare and subsequent Christy Ring final reverses, so to lead his team to glory on hurling's biggest day was the stuff of dreams.

It may not have been the swashbuckling performance from Antrim this year that lit up the competition, but finals are simply there to be won and when the questions were posed by Kerry, they had enough to answer them and get over the line.

Sunday's game was one that Antrim teams of the past have lost with the weight of expectation and doubts proving their undoing, but not this time. It has been clear for those paying attention that this group of players are a little different and when push came to shove, they rose to the occasion and got the job done.

"It’s a relief," said McCann at the final whistle.

"The last few years we’ve struggled to come down and win these big games, no matter who it was against. I’m not sure what it is, whether you come down for a final and things just haven’t clicked, but the lads worked everything right today – on the sideline and on the pitch, everything worked as we wanted.

"You could just see the passion and the emotion after, you could see the lads are enjoying it."

On a personal level, McCann was given little room to manoeuvre up against a packed Kerry defence as the Kingdom clearly has absorbed the lessons from the previous meetings between the teams.

Even when Antrim finally hit their stride after the break, Fintan O'Connor's charges refused to wilt and were right in contention right to the end but when push came to shove, it was the strength-in-depth that has served Antrim so well that once again came to the fore on the day.

"Definitely in the second half, we seemed as though we were always a couple of points ahead but we couldn’t get away, they kept clawing us back," said McCann.

"I was relieved at the end but that second half performance really showed where we’ve come from.

"In a point down at half-time having not played that great, missed a few chances, but in the second half we got the scores we needed.

"You could see the impact our subs made there, we brought on four or five in the forward line and that shows the strength that’s in our panel.

"I also have to give credit to those lads that didn’t make the 26 today, the boys who’ve been pushing the team on and really driving us in training."

The strength of character was a major factor and that was exemplified by Matthew Donnelly whose mistake led to Mikey Boyle's goal.

However, the Ballycastle man composed himself at the break and would put in a mammoth shift in the second period: breaking, snuffing out Kerry attacks and using his strength to command the area.

His supporting cast of defenders were excellent also and the Antrim captain was full of praise for those who ensured the back door remained bolted.

"I’m delighted for Mattie," he added.

"Paddy Burke had a solid game, Stephen Rooney was unreal, the boys in defence were immense. Mattie will be sitting in there enjoying it and his wee boys will be at home dancing around the house."

Coming into this game, there was a lot of hype in the county with Antrim fans, starved of success, getting behind the team.

That hype can build pressure and with no fans in attendance, the eagerness to give those at home something to cheer was perhaps an extra weight on the shoulders early on, but the team captain said the players channelled that energy to see them home.

"Antrim GAA supporters are really passionate and like to get behind their teams," he noted.

"We have a massive fan-base and there will be loads of people watching this at home. I'd say there are more people watching that today than there ever was so it was hard to shield the lads (from the hype) but we tried our best. We tried to distance ourselves but tried to use that support on the day to drive the boys on."

The next stop on the journey is Division One and the Leinster Championship so while Antrim will rightly celebrate their 2020 success, there is still a road ahead to get to where they desperately want to be.

The GAA is expected to finalise their plans for 2021 with early indications the National League will begin at the end of February, so after a two-week break, Antrim's players will be straight back down to work as they look to build themselves back up to take on some of the game's leading lights.

Perhaps the quick turnaround can be a benefit as momentum will not be lost, but this is a long-term project for Antrim and manager Darren Gleeson, with McCann adding that they will relish the challenges to come.

"In a few weeks we’ll sit down and try to plan ahead where we’re going," he confirmed.

"I know the management have plans in place for us, they’re in their first year of working with the team, every management in every set-up comes in with at least a three year plan. It doesn’t get any more successful than getting promoted in the league and winning the championship.

"It’s going to be a step up but it’s one we’re happy to make and we’re going to work really hard to try and consolidate our place there.

"We have to try keep that momentum but it will be tough. We'll take a few weeks off and reevaluate it then. We're just happy to get over the line and worry about next season later, but we're glad to be there."

It was a fitting way for Antrim to complete their time on the field on Sunday by laying a wreath at the Bloody Sunday corner of Hill 16.

Managed by a Tipperary man, the Saffrons were keen to mark their respects and paused their celebrations to stand in sombre silence.

Leading his team in celebration as well as remembrance was another proud moment for the Creggan man and he said it was an honour to have been able to do so.

"Our county chairman (Ciaran McCavana) gave us a speech there before and it was very passionate," he revealed.

"Antrim people are very passionate about the GAA and we respect everything that's happened. This is an unbelievable stadium and there's a history behind it so we thought it was a good way to mark our respects as a county and a team."