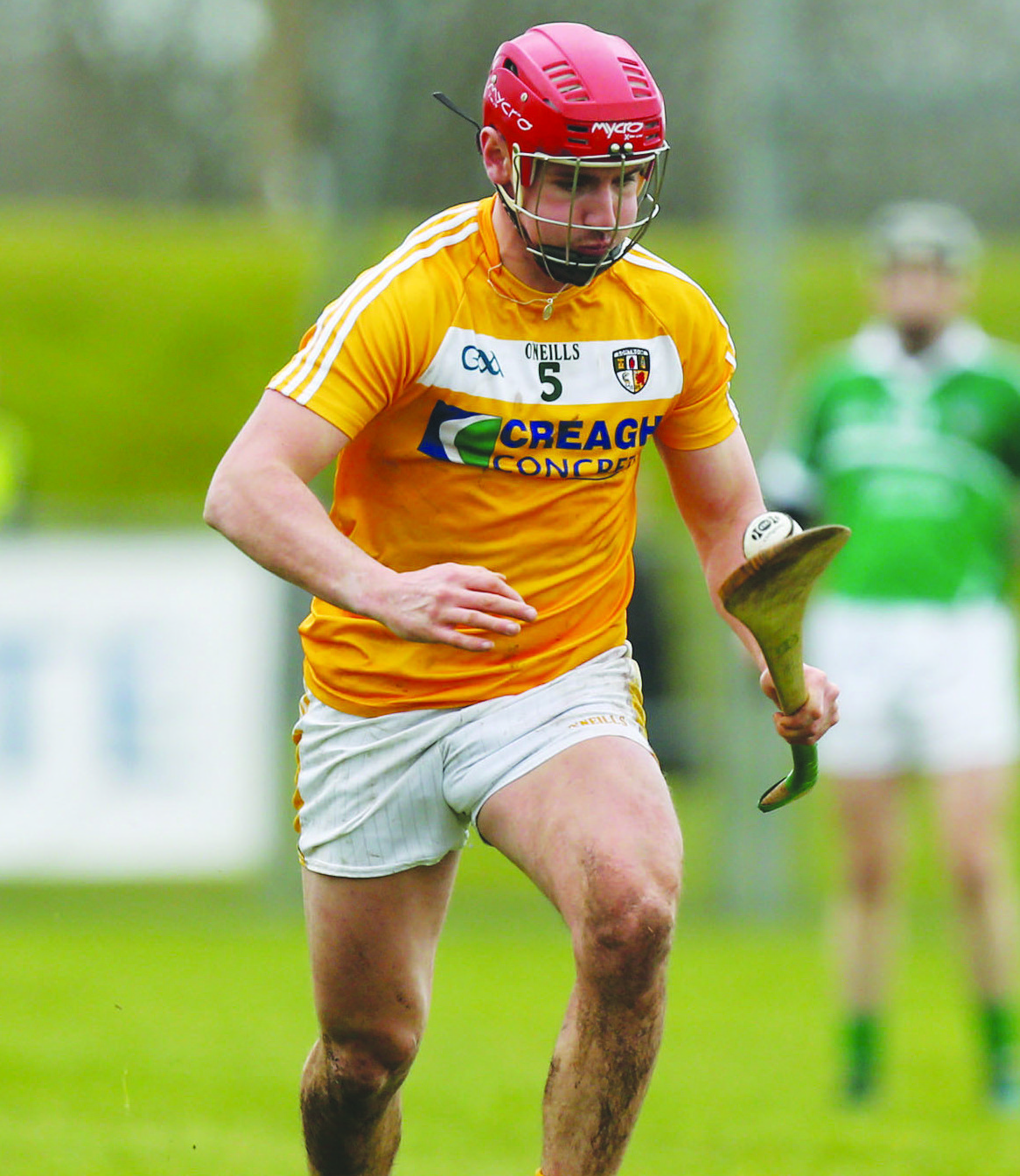 A STRONG second half performance from Antrim ensured the visitors were worthy nine point winners over a somewhat lacklustre Westmeath side in the opening round of the Bord na Móna Walsh Cup played in slippery underfoot conditions at Kinnegad last Sunday afternoon.

Terence 'Sambo' McNaughton and his management team will have been quietly pleased with the performance of the Saffrons who played an eye-catching brand of exciting hurling, particularly following the change of ends.

The winners led by the minimum at the interval but following the referees short whistle, Antrim upped the tempo and as a result Westmeath were surprisingly unable to cope with the onslaught of saffron and white attacks.

Antrim defender Simon McCrory was pleased to have started the season off on a winning note.

“It was good to have a positive start to the season,” said McCrory.

“We spoke before the match about getting a performance and we did and the result came with that as well.

“It was a boost for us as well because I can’t remember ever going down to Westmeath and winning.

“We’ll not get too far ahead of ourselves – we play them again in the league.

“Hopefully getting the win will help some of the younger lads reach their potential.

“We have had a disappointing few years – there is no other way of putting it. “It is important for us to get people talking about Antrim hurling in a positive light again.”

It was The Lake County who started the brightest in front of a small attendance and the lively Allan Devine pointed from a free in the second minute. Niall McKenna soon equalised for the visitors before Aonghus Clarke and Conor Johnston swapped scores to level matters once again. From here until the 20th minute, it was all one way traffic as the midlanders gained a firm foothold on proceedings.

Points from Daragh Egerton, Jack Galvin and three scores from Devine gave Westmeath a deserved five point advantage. Both sides had good goal opportunities in the 12th and 14th minutes but on both occasions Joey Boyle and Ciaran Clarke were thwarted by fine saves from the respective net-minders.

To their credit, Antrim refused to lie down and scores from Daniel McKernan (tidy point after Westmeath lost possession), McKenna, Neil McManus, Clarke (routine free) and a brace of quality efforts from Johnston drew the sides level with half-time approaching.

In the last act of the opening half, Clarke fired over a free from out near the sideline to give his side a slender one point lead at the change of ends, the scoreboard reading Antrim 0-10, Westmeath 0-9.

Antrim upped their game considerably following the interval and really took the game to their lacklustre opponents.

Maol Connolly punished a poor Conor Shaw error five minutes following the resumption to extend Antrim’s lead but a classy Devine point from an acute angle ensured Westmeath kept in touch with their opponents for the time being.

However, five unanswered points from Eoghan Campbell (brace of scores including a superb run and point for his first score of the game), McKernan, Johnston and McManus ensured Antrim had a healthy advantage at the midway point of the second half.

The introduction of veteran player Brendan Murtagh briefly knocked some life in to Westmeath and the talented Clonkill player fired over a fine point moments later.

Indeed, Murtagh was also unlucky not to net a three-pointer in the 65th minute but following some good link up play with colleague Eoin Price, the danger-man saw his tame effort easily gathered by Chris O’Connell in the Antrim goal.

Ciaran Clarke showed Murtagh how it was done four minutes from time when the ace Ballycastle attacker showed his direct opponent a clean pair of heels before finishing with aplomb past a static Shane McGovern.

A McKenna point closed out the scoring for the winners and in the final act of the game Westmeath’s full-forward Devine was a tad unfortunate to see his goal-bound effort deflected out for a ‘65’ by Antrim corner-back Stephen Rooney.

The referee blew the final whistle soon after as Antrim gained a most welcome victory after a rather testing few years for hurling in the county. Stiffer challenges will no doubt lie ahead for the Northerners and this will begin with a trip to face the might of Kilkenny this coming Sunday in Abbottstown (2pm).

Although the Cats fielded an U21 select against DCU last week, they are expected to field a stronger team against Antrim this weekend.

“With us in Division Two and playing in the Christy Ring, we aren’t going to get many opportunities (to play Kilkenny),” said McCrory.

“For us older guys in the team, we have to savour these opportunities. We don’t know when it will happen again.

“We have to try and get a performance and try and learn from them.

“It might not be Kilkenny’s full team but they are still Kilkenny players and any player who puts on a Kilkenny jersey has to earn it. You don’t get the chance to play for Kilkenny in any competition without having a track record of being a good hurler.”

A clip of the Antrim netminder making a stunning point-blank save during the win over Westmeath went viral at the beginning of the week.

“I spoke to him after the match about it,” added McCrory.

“It actually reminded me of a save he made in the Christy Ring Cup semi-final last year which got us over the line against Down.

“He is well known for his reactions. I had a direct view of his save yesterday. It was straight at him – I don’t now how he stopped it.

“He is a classy keeper. Even the way he tipped it wide and out for a ’65 – that is top goalkeeping. We are lucky to have him.”