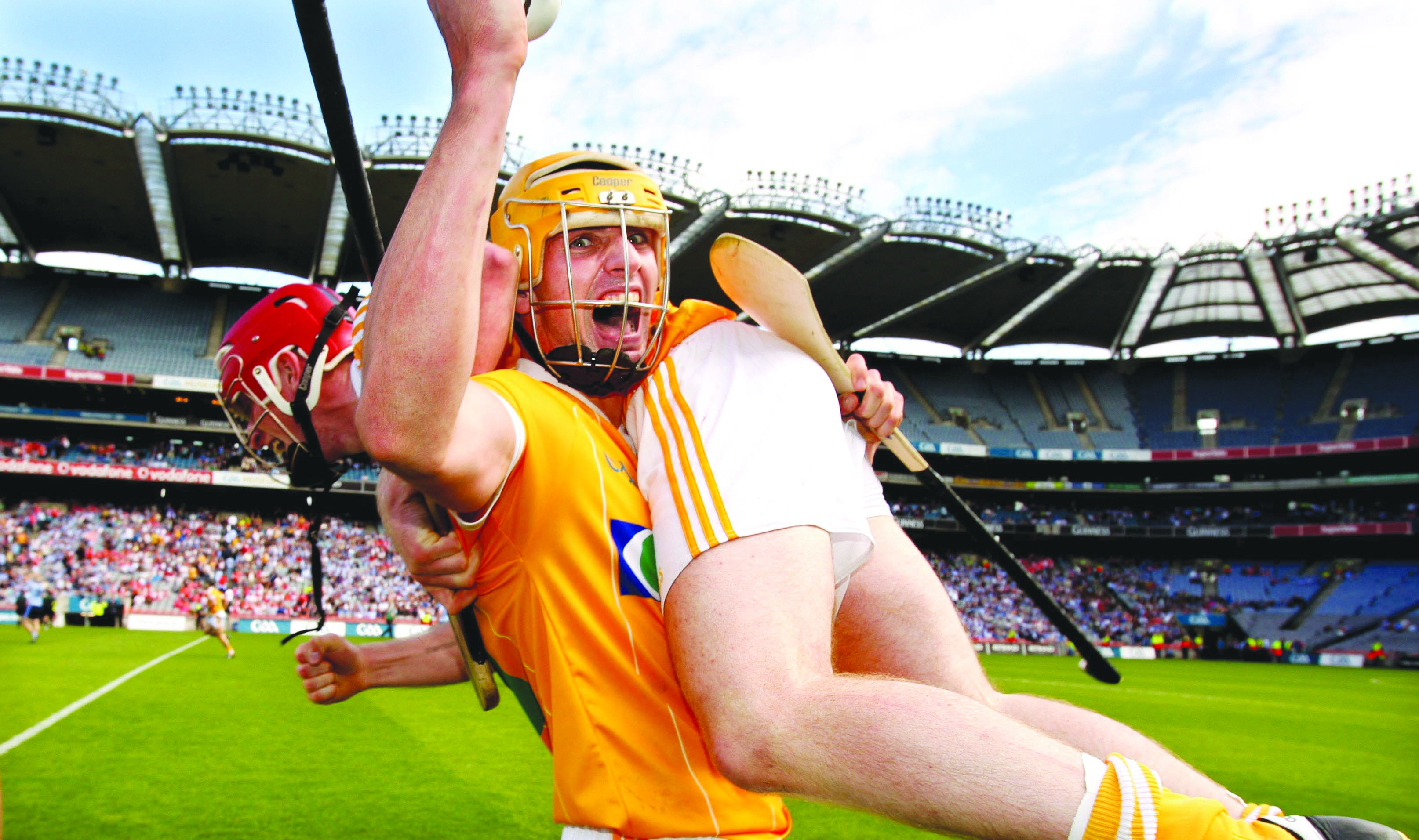 IT is the playing surface that Simon McCrory remembers most. Smooth. Level. Perfect.
Hurling at Croke Park differs greatly from the playing fields of West Belfast and the Glens of Antrim.

It is almost six year since the St John’s man last graced the hallowed turf during the memorable summer of 2010 and the clashes with Dublin and Cork.

This Saturday, the Saffrons return to Jones’s Road in search of silverware as they bid to defeat Meath in the final of the Christy Ring Cup.

“Every hurler’s dream is to play in Croke Park, no matter what the competition is. It is a big deal for Antrim hurling. It doesn’t come around too often,” said McCrory.
“Luckily for me, this will be my third time playing in Croker.

“This is one of the motivating factors playing in the Christy Ring – you get a day in the sun in Croke Park.
“It is a big thing for the players and there seems to be a buzz around the county as well.

“In 2010, we beat Dublin and, a week later, we played Cork. It only seems like yesterday but time doesn’t be long going by.

He added: “It is just a huge pitch. There is plenty of space so, as a defender, you’d want to be tight on your man.
“The one thing that struck me was how flat it was. There are no bumps whatsoever. The surface is as perfect as you are going to get. It is different from county grounds and club grounds.”

A win on Saturday would go a long way to restoring pride in Antrim hurling following a turbulent season which saw PJ O’Mullan step down as manager after a disappointing National League.
Failure to gain promotion from Division 2A was a real body blow for the Saffrons and their performances thus far in the Christy Ring Cup have been far from flawless.

Yet, McCrory feels a win against the Royals on Saturday would provide a much-needed boost of confidence to the squad.
“It would obviously mean a lot,” said McCrory.

“Everybody is still hurting a lot with how the year went. Different things went on and some things were said and a lot of things that were untrue were said.
“We are a long way away from where we want to be. We still have a lot of work to do but this would mean a lot to the players.

“It would be something positive for the county and that will also be a motivating factor for the player’s – to get back to winning ways. This would be a nice way to say that there still are good hurlers in Antrim.”

While Antrim eased to an opening round win over Kildare on a scoreline of 3-20 to 0-17, their subsequent wins were less straightforward.

Roscommon bagged a goal in the opening seconds of their clash with Antrim in Dunloy to take a four-point lead and the hosts were forced to dig deep to see off the challenge of the plucky Connacht side by an unconvincing five points.

Ulster rivals Down gave Antrim an even greater scare in the semi-final at Loughgiel with Mickey Johnston’s side losing by just four points.

McCrory admits the squad have done much soul-searching over the past few weeks and feels the below-par performances stem from a lack of workrate.
“We have sat down and talked about it and we are probably still not working hard enough,” stated the St John’s ace.

“We are playing in spells. After half-time in the Kildare match, we played for about 10 minutes and we played great hurling. But we tend to have this tenancy to take our foot off the gas.

“We think it is down to a lack of workrate and concentration.
“We just need to keep going and, when we get our spell in the game, we need to keep our foot on the gas.

“All the teams at this level are good teams and we have no right to think we are better than anyone because we are not. We are at this level because this is our level at the moment.”

Perhaps the current Antrim squad are still trying to force their own identity under the new management.

This time last year, Kevin Ryan was at the helm as Antrim suffered relegation from the Liam MacCarthy Cup while PJ O’Mullan took charge for the ill-fated league campaign.
McCrory believes the squad will take time to adjust to the brand of hurling favoured by the current regime.

“Sambo (Terence McNaughton), Woody (Dominic McKinley), Neal (Peden) and Gary (O’Kane) have their own view on hurling – as did Kevin and PJ,” added McCrory.
“I think Sambo and Woody’s style is maybe more old-school. You have a man to mark and you have to win your own battles.

“There were times in the Down game that the system and the style of play the management want us to play was getting there.
“It just takes time to embed. We haven’t had a chance to play good quality challenge games.”

This Saturday at Croke Park, Antrim will get another chance to fine-tune their system and deliver a 70-minute performance when they take on Meath for the Christy Ring Cup.
The Saffrons won the competition back in 2006 while the Royals are making their first final appearance having won the Nicky Rackard Cup in 2009.

McCrory expects the underdogs to rise to the occasion and stressed that Antrim will have to match the desire and intensity of their opponents.
“I have never played against Meath,” said McCrory.

“I have watched them in the Christy Ring Cup before and I didn’t see them as a weak team. We are expecting nothing other than a really tough game.
“In a final, I think everybody lifts their game and I think Meath will be highly motivated for this.

“It is like us when we played in the Liam MacCarthy. Any time we came us against the Wexfords, the Offalys, Dublin – you always have that extra five or 10 per cent when you’re playing against the so-called bigger teams.

“We have dropped down from the Senior Championship and every team is going to look at us as a big scalp and we have to be prepared to face that.”