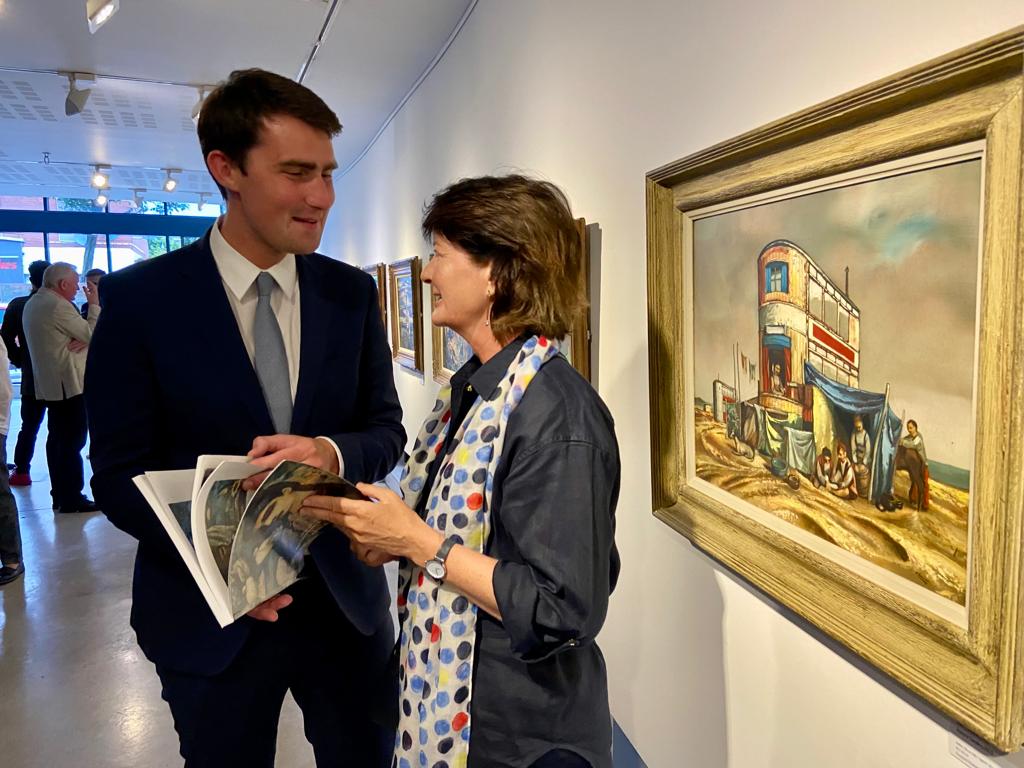 MINISTER of State for Gaeltacht Affairs and Sport, Jack Chambers TD was in Belfast on Thursday to officially open an exhibition of work by West Belfast artist Dan O’Neill.

The exhibition which will be on display at Cultúrlann McAdam Ó Fiaich until 14 August has been curated by art historian Karen Reihill who published a monograph on the artist to mark the centenary of his birth in 2020 and is the first retrospective of his work since an exhibition at the Ulster Museum in 1952.

Speaking at the event, Minister Chambers praised the staff at the Cultúrlann and thanked them for the opportunity to attend the exhibition opening.

“O'Neill is a member of your family, born here in West Belfast. He developed his talent for art on his own initiative – for the most part – by regularly entering the library to study the images of Renaissance masters in depth,” he said.

“As far as I understand, there has been little talk about it for half a century here in his hometown. With this exhibition in Cultúrlann McAdam Ó Fiaich, the people of Belfast will have the opportunity this summer to get to know once again a passionate artist whose work shows mastery and confidence.

“I understand that the pictures have been lent by private collectors and that twelve of them were at the Office of Public Works and visible at Farmleigh Gallery in Dublin just before coming to the Cultúrlann.”

In the frame: Half a century since his last exhibition in Belfast and 48 years after his untimely death, the stunning paintings of Dan O'Neill, who called Dimsdale St off Springfield Road home, are coming home. @GerryAdamsSF was among those rolling out red carpet in @Culturlann pic.twitter.com/Qp1XxJoqlc

Praising the facilites on offer at the Falls Road venue, he added: “It's great to see the mix of groups that work here – the drama group Aisling Ghéar; the bookshop An Ceathrú Póilí, the publisher An tSnáthaid Mhór, Gaelchúrsaí promoting education, the magazine Nós, and Taca supporting learners and of course and perhaps the most important facility the restaurant – it's always important that people would have a chance to sit down and have a cup of tea and discuss the worries of life.

“I understand that the Cultúrlann is involved in cross-border projects and collaborations, especially in the field of the arts – musicians, playwrights, writers, publishers from all over this Island.

"I understand that work is currently underway on 'An Cosán Draíochta' with Johnny Óg Connolly, in association with Cuan Studio in Spiddal to develop co-operation between the people of the Gaeltacht and the people of Belfast.

“You will be celebrating the harp here next month, I am told you have a concert here and I understand that the work is also a cross-border collaboration.”

The Minister added that he was particularly interested in the work that Cultúrlann are doing as his Department and the Department for Communities were there as sponsor departments at the North-South language body – Foras na Gaeilge.

“I understand that Foras na Gaeilge provides funding for the Cultúrlann here, as well as other projects here in the city,” he said.

“Also, we are providing funding through the New Decade, New Approach agreement and also with the Irish Language Investment Fund. I congratulate all of you who are doing an excellent job here which is central to that work and I wish you every success.”