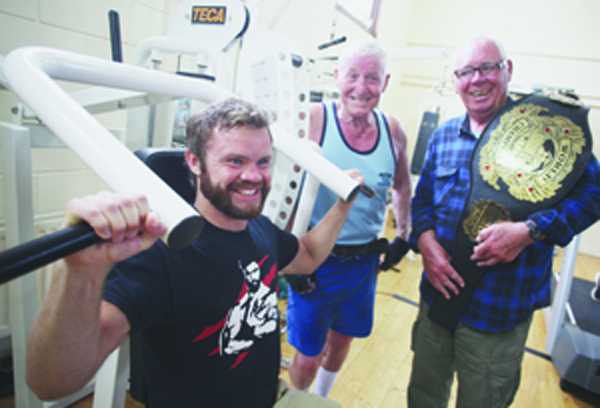 WORLD CHAMP: Andy Young with John and Frank Dempsey at the Carrick Hill gym where he arrived to promote a healthy lifestyle

THE north’s only professional cage fighter – double world champion Andy ‘Taz’ Young – was in Carrick Hill this week to promote a healthy living lifestyle.
The Newtownards pugilist  was pictured with local people using the community gym and has promised to come back to speak to the young people using the summer scheme.
Andy said that for him, community work was as important as training.
“I want to be the best that I can be and a big part of that is helping others,” he said. “I do a lot of talks in primary schools because there’s no point in having success if you can’t give a bit back. It’s very important to me.”
Since he lifted the WWFC world flyweight championship in Ukraine in December he has added the BAMMA flyweight belt to his collection and become one of the most promising fighters in the sport.
He said it took a lot of effort to maintain his level of skill and fitness.
“It’s a lot of hard work. When you are full time you have to be very self motivated and at times you don’t want to get out of bed because you are so battered and bruised but you do anyway.”
Frank Dempsey from the Carrick Hill Community Centre said Andy was the latest in a line of elite sportsmen to pay the area a visit.
“We have had a lot of champion boxers in here and it’s great to have Andy call round because he is delivering an important message about health and discipline and where a healthy lifestyle can lead you,” said Frank.
“It’s especially good for the kids because that positivity filters down and we are looking forward to having him back to meet the young people of the area.”