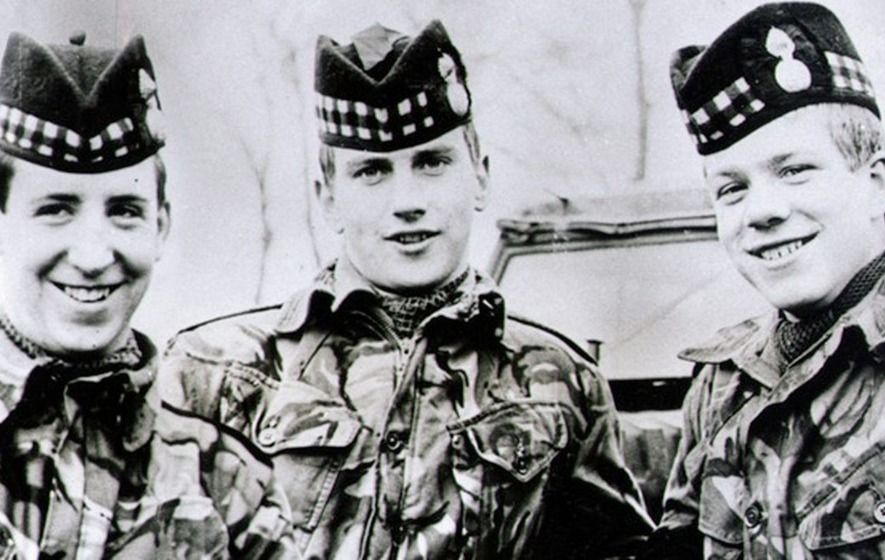 SLAUGHTERED: Dougald McCaughey, 23, left and brothers John and Joseph McCaig, 17 and 18, were murdered after being lured from a pub on March 10, 1971– new evidence has thrown up fresh questions

NEW information has been discovered about the shooting of three Scottish soldiers by the Provisional IRA in North Belfast in 1971 on the 50th anniversary of the killings.

Brothers John and Joseph McCaig, 17 and 18, and Dougald McCaughey, 23, were murdered after being lured from a pub.

The three off-duty troops from Ayr were found executed on a remote mountain road in White Brae, Ligoniel on March 10, 1971.

New documentary evidence of what the British army called 'executions in real-time' has now been uncovered by Ciarán MacAirt of Paper Trail revealing that the soldiers had been seen by army colleagues in the company of five men in the pub where they spent their final hours.

"EXECUTION": The Three Scottish Soldiers whose 50th anniversary is today. Another grim turning point in the conflict in 1971 - new evidence published here for the first timehttps://t.co/fVlG7tTsWL pic.twitter.com/JtDB1vw84v

Ciarán explained: “Not only do we read about the discovery of the executions in real-time, but also the immediate impact that it had on the operational orders of the British Army and the local unionist community.

“A State Red for Walking Out (a ban on leaving bases) was imposed immediately for British soldiers not on duty.

“The three Fusiliers had been off-duty and drinking in Belfast City Centre pubs before being lured to White Brae, Ligoniel. Britain then increased the minimum age of an operational soldier to 18 years of age.

“The files record important evidence from two Corporals who were in the same pub as the three Scottish soldiers – they report that they were not in the company of women as was alleged but with five men.

“The Head of Special Branch wanted to speak to the Corporals straight away.

“Later reports from an informer of 3 Para record the allegations that the three Scottish soldiers were lured to White Brae by women and caught in a honey trap:

“The files also record donations given to local sentry posts and barracks along with massive rallies and rising unrest, especially in the Unionist community.

“The British Army forwarded information to its Intelligence section regarding a UVF meeting and threat to kill three Catholics as a reprisal. When Internment was introduced a few months later, the British state denied any organised Loyalist violence existed.”

The British Army forwarded information to its Intelligence section regarding a UVF meeting and threat to kill three Catholics as a reprisal. When Internment was introduced a few months later, the British state denied any organised Loyalist violence existed.”

The log read: “Ulster Volunteer Force will be meeting in Ballymacarrett ton[ight] to discuss reprisal (on a tooth for tooth basis) against the Cats [Catholics] for killing the 3 1 RHF soldiers. 3 Cats [Catholics] to bite the dust in the next 2 or 3 days.”

Ciarán continued: “We now know, of course, that the killing of the three Scottish soldiers radicalised a new generation of Loyalists and pushed many of them towards violent extremism.

“What may be important to the families’ campaign for truth, is record of the impact that it had within the local Irish Catholic community as well. The British Army’s 39 Brigade logs detail numerous records of human intelligence sources offering unsolicited information.

“These sources were from the likes of Ligoniel, New Lodge and Falls Road.

“In one example, the British Army swiftly arranged a decoy Vehicle Checkpoint (VCP) within ten minutes to give cover to speak with a North Belfast taxi driver with information.

“In another example, a drunk man walked into a British Army barracks and offered information on who killed the three Scottish soldiers.  He was first interviewed by an RMP Special Investigation Branch Officer who recorded his claims that he was an IRA member.

“SIB (Special Investigation Branch) then directed that he should be tasked to British Military Intelligence and Scotland Yard who advised he knew nothing the following morning which lead us to believe that they had differing intelligence already in their possession.

“What all of this information was, what its intelligence grading was, and, importantly, what British Military Intelligence did with it remains essential to the families’ campaign today.”

Paper Trail is liaising with a solicitor firm supporting the victims’ families.