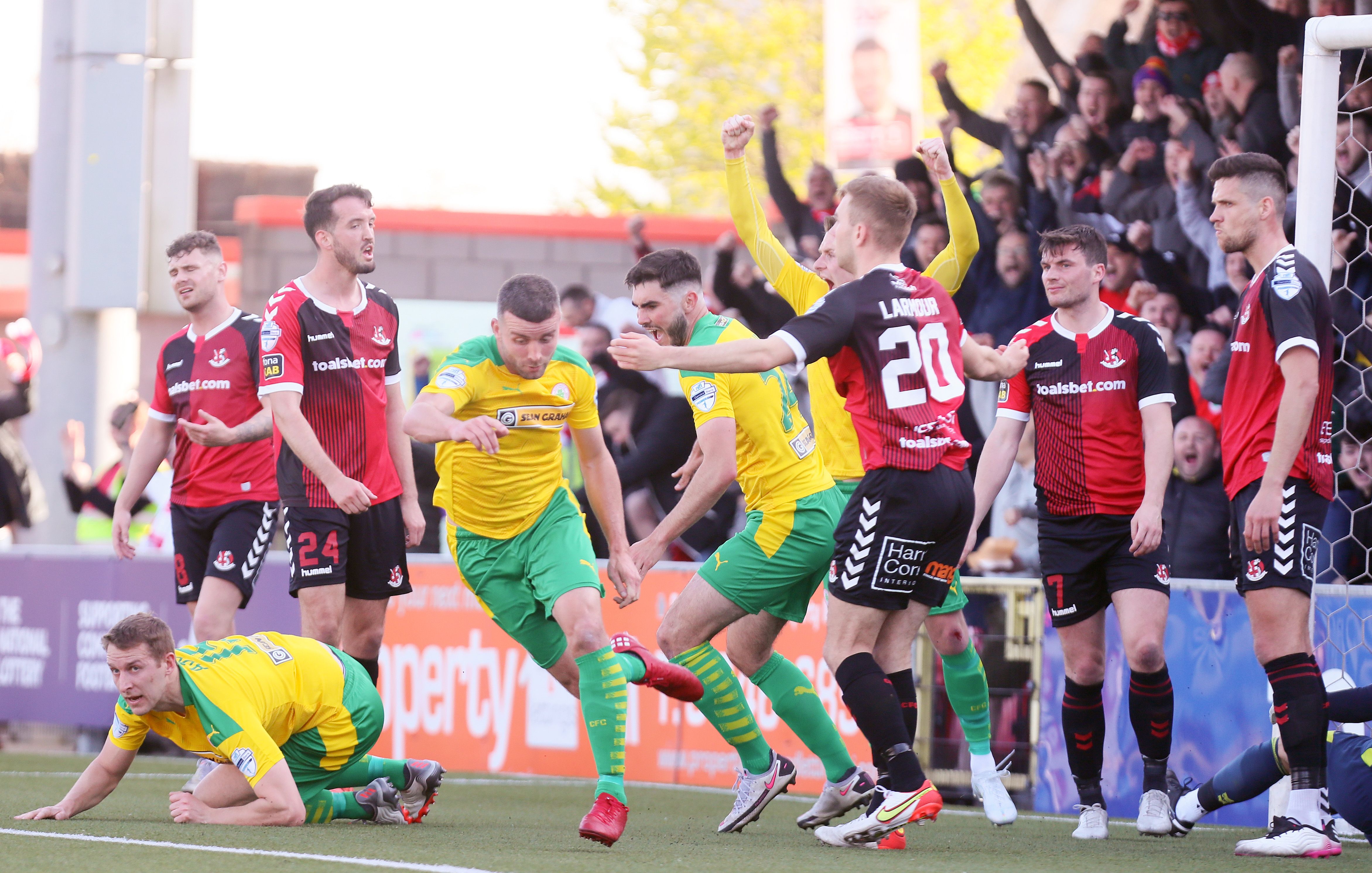 THE Irish Premiership title race will go down to the final day of the season between Cliftonville and Linfield after Ryan Curran struck twice in the space of four minutes to ensure that the Reds came from behind to claim a 3-3 draw in Saturday evening’s thrilling North Belfast derby with Crusaders at Seaview.

Ahead at the break with a goal from ex-Crues' legend Colin Coates, the Reds title challenge appeared to be in tatters when Billy Joe Burns fired home an equaliser and goals from Ben Kennedy and Jordan Forsythe gave the hosts a 3-1 lead with just over a quarter of an hour remaining.

But the visitors’ never say die attitude rose to the fore again when Curran hooked home from a Coates flick-on and smashed home at the back post four minutes later to make it 3-3.

There was unable to be a late winner as the derby rivals shared the spoils and coupled with Linfield being held 0-0 by Larne at Windsor Park, it’s all set up for a tense conclusion to the title race this weekend.

Reds’ boss Paddy McLaughlin was pleased his side is able to fight another day and feels it is important they show the same determination next weekend.

“We’re there to fight another day,” McLaughlin reflected.

“We take it down to the last day, the boys at one stage looked like they were dead and buried at 3-1, but the determination and drive that they’ve shown right throughout the year was there again.

“We were just hoping to maybe pull out a fourth and hoping we could pull it out of the fire completely and we would have been in control of our own destiny.

“We can’t fault the players for effort, we were disappointed with the goals that we conceded.

“The goals that we scored were well worked and were hard-earned with some good play. The goals we conceded were disappointing, but that can happen at this stage of the season. “People do make mistakes and sometimes you can get goals you don’t expect, and results do go the way you don’t expect. It’s important we keep going to the last game, it’s important we keep our heads down and we keep going again.”

McLaughlin named an unchanged starting eleven from Tuesday evening's 2-1 win at Coleraine as Colin Coates made his first appearance in the North Belfast derby in the colours of Cliftonville having previously captained Crusaders in his 18-year stint on the Shore Road.

The derby started with typical intensity, and it was Cliftonville who forced the first opening on nine minutes.

Rory Hale picked out the run of Jamie McDonagh with a lofted pass and McDonagh sent in an angled drive that Jonny Tuffey parried, with Josh Robinson hooking the loose ball behind for a corner, but nothing would come from it.

The Crues had their first opening approaching the half-hour mark when Ross Clarke pulled the ball back from the end line towards Adam Lecky, but Colin Coates threw himself in the way of the imminent threat.

At the other end, Levi Ives played a ball over the top to Ryan Curran, but he sent in a low cross that evaded any danger.

Sixty seconds later, Billy Joe Burns made a perfectly timed tackle to stop Jamie McDonagh on the edge of the area.

Just before the half-hour, the pressure intensified from the Reds as Jamie McDonagh swung in a free-kick that Colin Coates got on the end of but Jonny Tuffey pushed the header to safety.

On 32 minutes, the opener arrived at Seaview and went to the title-chasing visitors when Levi Ives's corner was headed home by Coates for his first league goal for Cliftonville.

Joe Gormley hooked an effort goalwards a few minutes later, but it was too high to trouble Tuffey.

Crusaders pushed for the leveller before the break as Ben Kennedy saw his low drive turned around the post by Luke McNicholas and a few minutes later, he teed up Philip Lowry a for well-struck shot that was inches over the bar.

Deep into injury-time, the hosts went close again from another Kennedy set-piece that Jordan Forsythe headed wide of the post as Coates header proved the difference at the interval.

Cliftonville almost doubled their lead before the hour-mark after Rory Hale linked up with Levi Ives on the edge of the area, but the left-back’s low drive was down the throat of Tuffey.

It was an opportunity they would rue missing as Billy Joe Burns arrowed an equaliser into the top corner to draw the hosts level 60 seconds later.

Momentum was with the home side and on 64 minutes they completed the turnaround as Ryan Curran attempted to clear the ball ahead of Robbie Weir and Ben Kennedy nipped in ahead of Jonny Addis and thumped a low shot past Luke McNicholas to make it 2-1.

Crusaders appeared to have wrapped the game up when they extended their lead on 73 minutes.

Ben Kennedy dropped in a corner and Jordan Forsythe bundled home to make it 3-1 and leave the Reds’ title aspirations looking rather glum with little over a quarter of an hour remaining.

But on 76 minutes it was game on again when Levi Ives swung in a corner from the left. Colin Coates flicked it on and Ryan Curran swivelled and hooked home to bring the game back to life.

The goal gave the Reds renewed impetus and with 10 minutes remaining it was level at Seaview for the second time.

Chris Curran played the ball out wide to Jamie McDonagh who swung in a cross that was half-cleared and fell to Ryan Curran to bundle high into the roof of the net at the back post to make it 3-3.

Crusaders almost regained the lead a few minutes later from Ross Clarke’s cross that was headed onto the roof of the net by substitute Jordan Owens.

A flashpoint occurred late in the game involving both benches after a clash between Levi Ives and Jordan Forsythe that saw assistant managers Declan O’Hara and Jeff Spiers shown yellow cards.

There was to be no grandstand finish as the derby ended in a 3-3 draw and the title race goes to the wire. 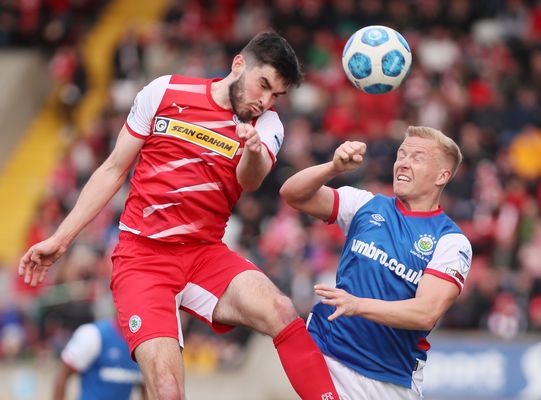 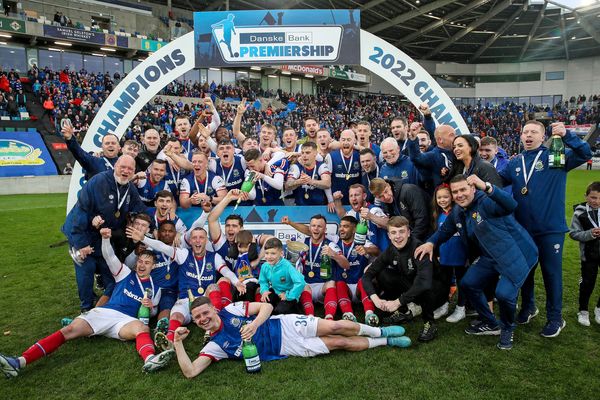 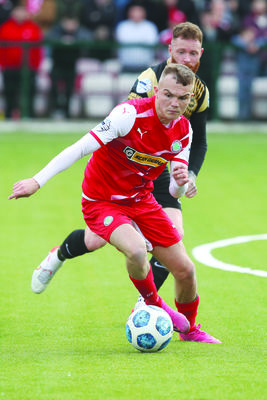