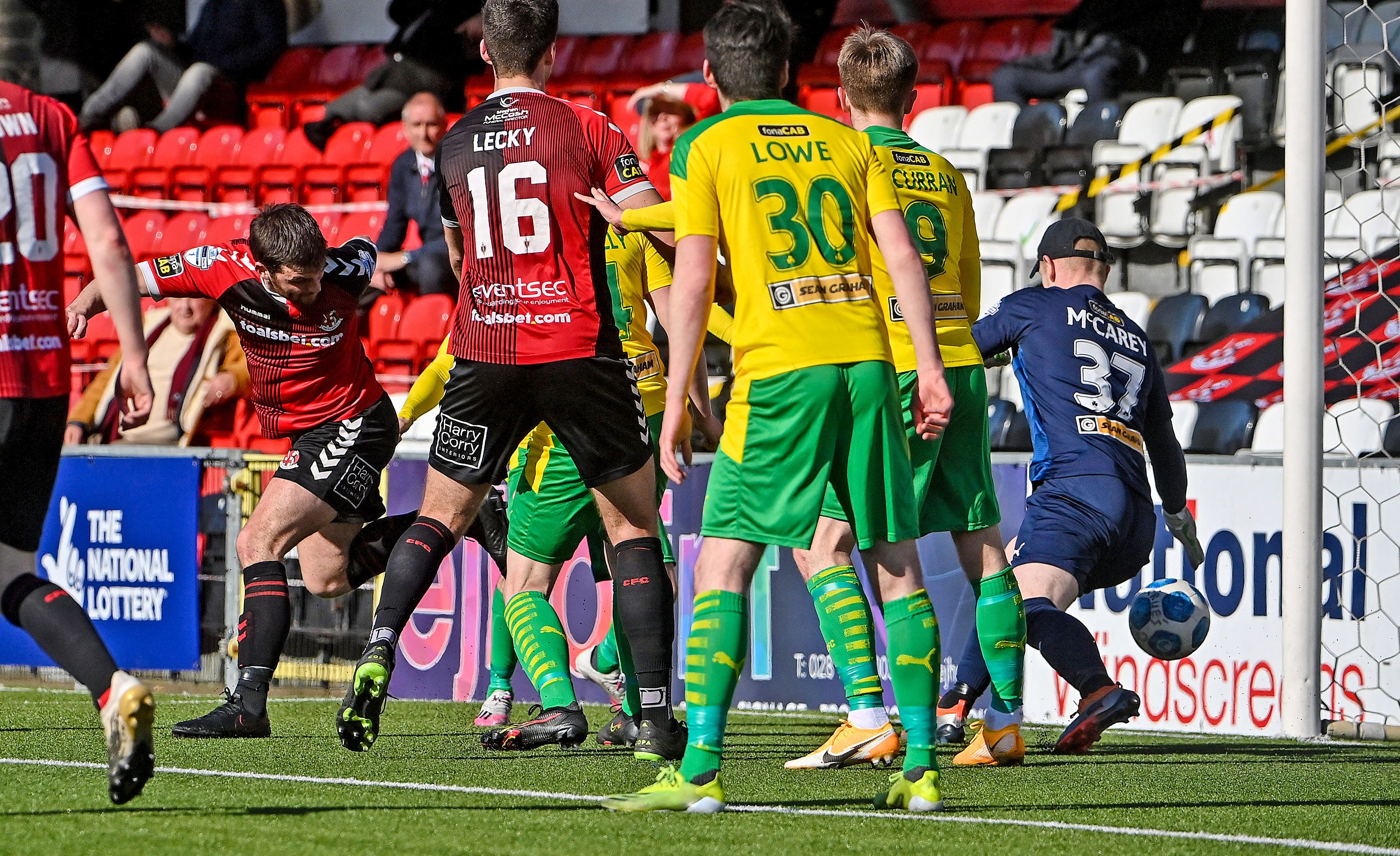 Philip Lowry finds the net for the opening goal Presseye

CRUSADERS and Cliftonville shared the spoils in an entertaining 2-2 draw in Saturday’s North Belfast derby at Seaview.

Jordan Forsythe headed the hosts into a half-time lead but in-form Cliftonville levelled through Ryan Curran and then took the lead through man of the moment Michael McCrudden.

Paddy Mclaughlin’s side were poised for a rare win on the Shore Road until Philip Lowry scrambled in a late equaliser to ensure his side claimed a very valuable point in their pursuit of a top-six finish.

The Reds’ boss felt it was a case of two points dropped for his side and rued conceding both goals from corners.

“I thought our second-half performance was excellent, going in 1-0 down at half-time and the performance in the second-half was a complete turnaround from the last 10-15 minutes of the first-half.

“I thought up until the goal we dominated proceedings and the chances, but you know what you get when you play Crusaders, especially away from home. They’ve got that aerial threat and that direct ball.

“I’m just disappointed that we spoke about it and we’ve done a bit of work on it, but we’ve conceded two soft goals from two corners.

“It’s an area we can improve on but in general play I thought we were superb right throughout. We created so many chances, at 2-1 we’d chances to extend it and make it 3-1 and put the game to bed.”

McLaughlin named an unchanged starting 11 for the third game running.

Paul O’Neill returned to the substitutes’ bench after sitting out the previous two encounters through injury.

Cliftonville made the brighter start on the Shore Road with a short corner by Aaron Donnelly being immediately returned and his cross was flicked on at the near post by Michael McCrudden whose header had O’Neill scrambling, but the Crusaders’ shot-stopper gathered at the second attempt.

O’Neill was then forced to parry an effort from Daire O’Connor after the midfielder pinched the ball from Billy Joe Burns.

The Crues’ first threat came after a quarter of an hour when Heatley crossed from the left and Declan Caddell rose highest but could only head straight at Aaron McCarey in the Cliftonville goal.

Midway through the opening half, Heatley found himself in a yard of space and advanced into the area before calling McCarey into action with a magnificent stop.

The opening goal arrived for the hosts a minute shy of the half-hour mark when Jordan O’Rourke’s corner from the right was headed home at the near post by Jamie Forsythe to give Stephen Baxter’s side the lead.

A second goal almost arrived on 38 minutes, but Ryan O’Reilly slid in and cleared ahead of Heatley at the expense of a corner and from the resulting set-piece, Adam Lecky’s volley was smothered by McCarey.

Cliftonville threatened before the break with Ryan Curran seeing his snapshot rise over the bar and Michael McCrudden saw his effort blocked by Aidan Wilson with the final effort of the half as Crusaders led 1-0 at the interval.

The Reds began the second period on the front foot again and deservedly levelled on 55 minutes.

Kris Lowe switched the ball to Michael McCrudden who sent in a cross from the right and Ryan Curran rose to head past Sean O’Neill for his 13th of the season.

Crusaders were perhaps fortunate that referee Ian McNabb didn’t see Daire O’Connor being taken out on the edge of the area a few minutes after the goal, a decision that irked McLaughlin post-match.

Midway through the half, Cliftonville turned the game on its head as Aaron McCarey lofted a high ball forward and Billy Joe Burns let it bounce with Michael McCrudden profiting and notching his 10th goal of the season to make it 2-1.

Philip Lowry almost pulled the Crues level with a quarter of an hour remaining, but Jamie Harney did just enough to take the ball away from the midfielder’s toe as he was about to pull the trigger.

Cliftonville had a golden opportunity to kill the game off with 10 minutes remaining as Chris Curran picked out Rory Hale who attempted to round O’Neill and shot goalwards from a tight angle. However, substitute Gary Thompson steered Hale’s effort off the line.

It was a chance the Reds would come to rue as Crusaders pegged them back with two minutes remaining.

David Cushley’s corner from the right was flicked on by Billy Joe Burns and Philip Lowry’s back flick ended up in the back of the net to make it 2-2.

Both sides could have won in the game in a frantic finish as Chris Curran burst forward and slipped the ball across to Ryan Curran whose initial effort was blocked and follow-up was too high to trouble Sean O’Neill.

At the other end, Jamie McGonigle had a golden chance to secure it for the hosts, but he tangled with Jamie Harney and Ryan O’Reilly hoisted the ball to safety and both sides were forced to share the spoils in the end.

Crusaders’ manager Stephen Baxter felt a “tinge” of disappointment to only come away with a point and was unhappy with the concession of his side’s goals.

“Given that we’ve shot ourselves in the foot around the game, we took a great lead in the game and we were looking very comfortable. We limited them to very little in the first-half - I don’t remember them in our box.

“The manner of goals… the goalkeeper kicks the ball long for both goals today and that’s the great disappointment. He kicks the ball the full length of the pitch and I called Paul Heatley to pick up his man on the overlap.

“It wasn’t controlled by a forward, we sat back and the ball was put into our box. We don’t deal with the ball and don’t we deal with the cross and it is in the back of our net.

“We haven’t asked them to work hard for that goal and it is criminal in this level of the game.

“The second goal was just joke level. Billy Joe Burns has apologised; he is so terribly disappointed because he had a super game, and that happens.

“He lost the ball in the sun, it went over his head, the boy mishits the shot and it ends up in the back of our net.”