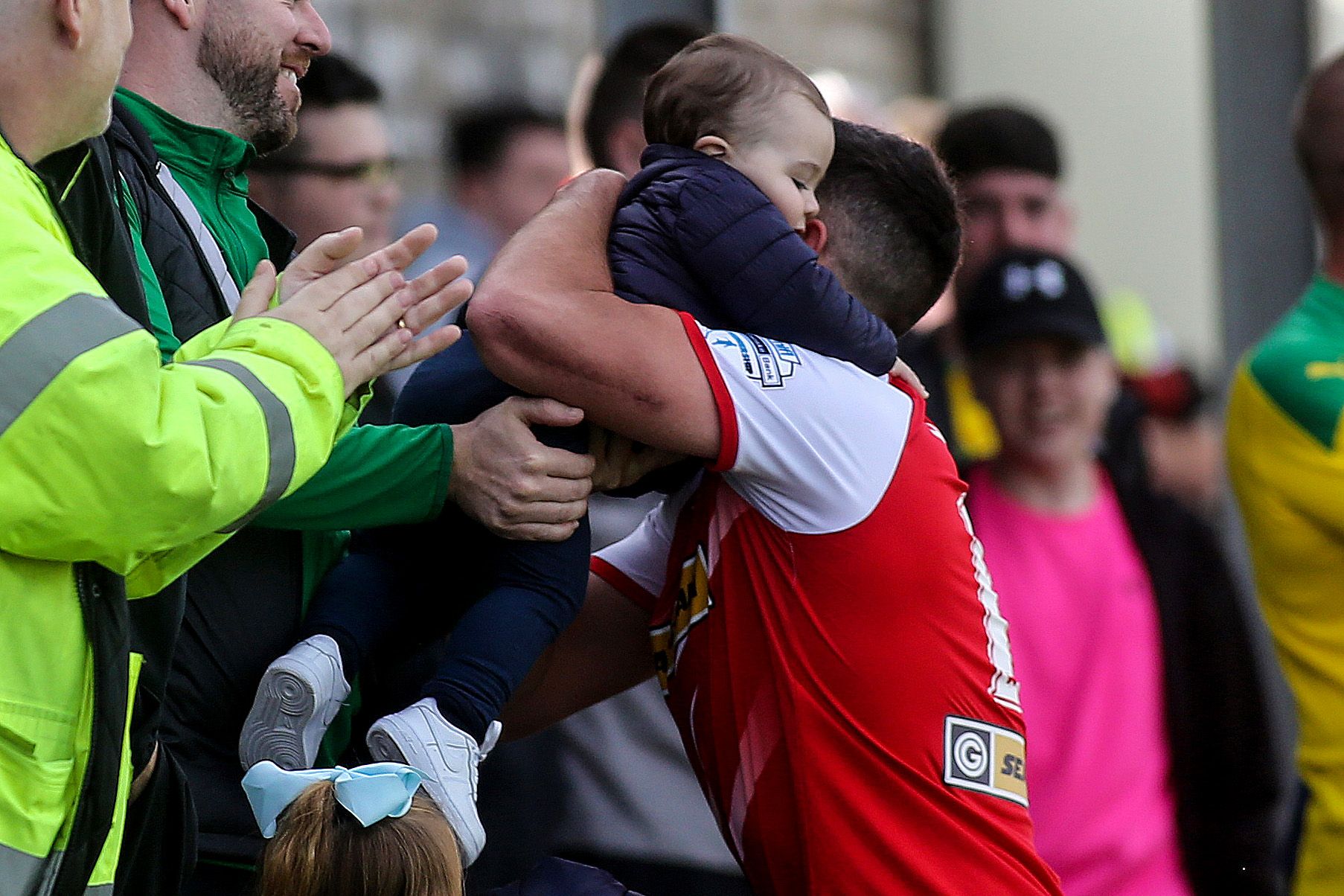 JOE Gormley marked his 350th appearance for Cliftonville with a double that helped his side come from behind to maintain their unbeaten start to the season with a 3-1 win over Dungannon Swifts at Stangmore Park on Saturday afternoon.

The Swifts forged ahead through a Oisin Smyth penalty before Gormley levelled at the break. The talisman tapped home a second early in the second half and despite weathering a late storm the visitors secured victory with a Ryan Curran strike in injury-time.

Reds boss Paddy McLaughlin got the match that he predicted and credited his players for their strength throughout.

“It was everything that we thought it was going to be,” reflected McLaughlin.

“It was a really tough, tough game against a brilliant football team. Dean Shiels is doing a fantastic job here; he’s getting the players to play the right way and they’re getting the ball down and playing out from the back.

“You’ve got to give them all the credit in the world - they done that all throughout the match and fair play to them. We knew it was going to be tough but thankfully our boys were strong in possession and strong out of possession and we got the job done."

McLaughlin went back to full strength having made eight changes for the visit of Harland and Wolff Welders in midweek.

The only two changes from last weekend’s derby draw with Crusaders were enforced as injuries meant that Rory Hale and Jamie Harney dropped out. In their place came Luke Turner and Kris Lowe.

Dungannon made the early openings and had a penalty appeal turned away within the first five minutes when Darragh McBrien attempted a pass in the area and it hit the hand of Luke Turner from close range, but referee Ross Dunlop was uninterested and waved away the subsequent appeals.

McBrien then let fly with an effort from distance which had Declan Dunne scrambling across his goal, but it was inches wide of the near post.

The hosts had the opportunity to hit the front on the quarter hour mark when O’Brien was again involved as he looked up and spotted Caolan McAleer peeling of his man. McAleer controlled and was caught by Dunne in the area with Dunlop pointing to the spot.

Oisin Smyth seized responsibility himself and the Swifts captain sent Dunne the wrong way to give his side a deserved lead.

Just before the midway point in the half, Darragh O’Brien found himself in a dangerous position and curled a low effort past the post.

Cliftonville hadn’t caused the Swifts any problems but restored parity from their first clear-cut opportunity.

Chris Gallagher hoisted a cross-field pass to Jamie McDonagh who took the ball down and clipped it into the area. Joe Gormley collected ahead of Alex Moore and with his second touch guided it to the net to level on his 350th appearance for the club.

It sparked Paddy McLaughlin’s side into action and they could have led at the break. An in-swinging McDonagh corner was pushed to half safety by Moore with Turner and Ronan Doherty denied on the follow-up chances.

McDonagh delivered another dangerous set-piece a few minutes later that came the whole way through the congested area and wide as the sides went it in the score level at the interval.

Cliftonville picked up where they left off before the break as Ryan Curran flicked the ball through to Gormley, but Moore was quickly out to thwart the striker.

Gormley was in the thick of the action again, driving into the box and his cross-cum-shot was scrambled to away to safety by Cathal McGinty.

The pressure eventually told on the Swifts defence after 50 minutes when Chris Curran won the ball high up the pitch and threaded to through to namesake Ryan whose low cross to Gormley was tapped home to make it 2-1.

Dungannon Swifts tried to forge an equaliser and Jonny Addis was forced to throw himself in the path of Ryan Mayse effort before the hour-mark.

At the other end, Ryan Curran volleyed high over the bar and Levi Ives played a one-two with Ryan Curran though couldn’t keep his shot down.

The Swifts had a second penalty appeal waved away when Dunne spilled a low effort and Rhyss Campbell claimed to have been clipped by the Reds shot-stopper, but Ross Dunlop wasn’t convinced.

Campbell then swung in a cross that substitute Ben Gallagher flicked towards goal with Dunne touching it behind for a corner and from the resulting set-piece Glynn’s delivery dropped and Campbell saw his shot turned onto the post by Dunne.

With a quarter of an hour remaining, a defensive clearance by Keith Cowan almost wrapped the game up.

The former Glentoran and Warrenpoint defender felt Ryan Curran in close proximity and overhit his backwards pass to Alex Moore with the ball crashing off the bar.

Dungannon turned defence to attack and missed a glorious chance to get back on terms when Darragh O’Brien slipped the ball through to Ryan Mayse who went through one-on-one but fizzed his shot past the post.

Despite the hosts pushing hard for an equaliser, they were undone at the other end when substitute Paul O’Neill forced an error from Alex Moore. Ryan Curran picked up the loose ball and curled it home despite the best efforts of Keith Cowan who attempted to block it with his hands and was booked in the aftermath.

It was enough to secure the win for the Reds and ensure they cement their place at the top of the table. 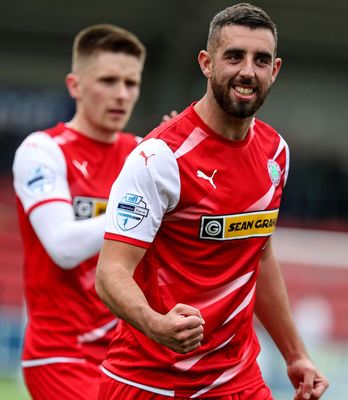 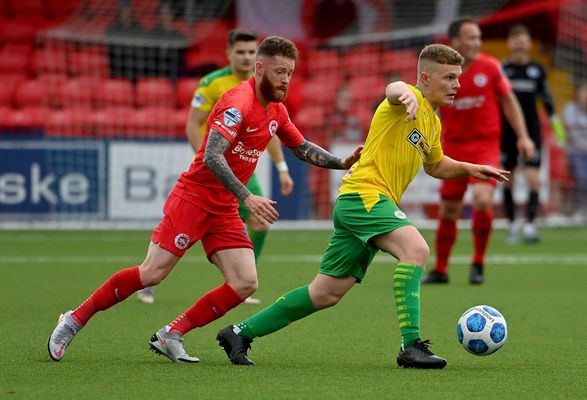