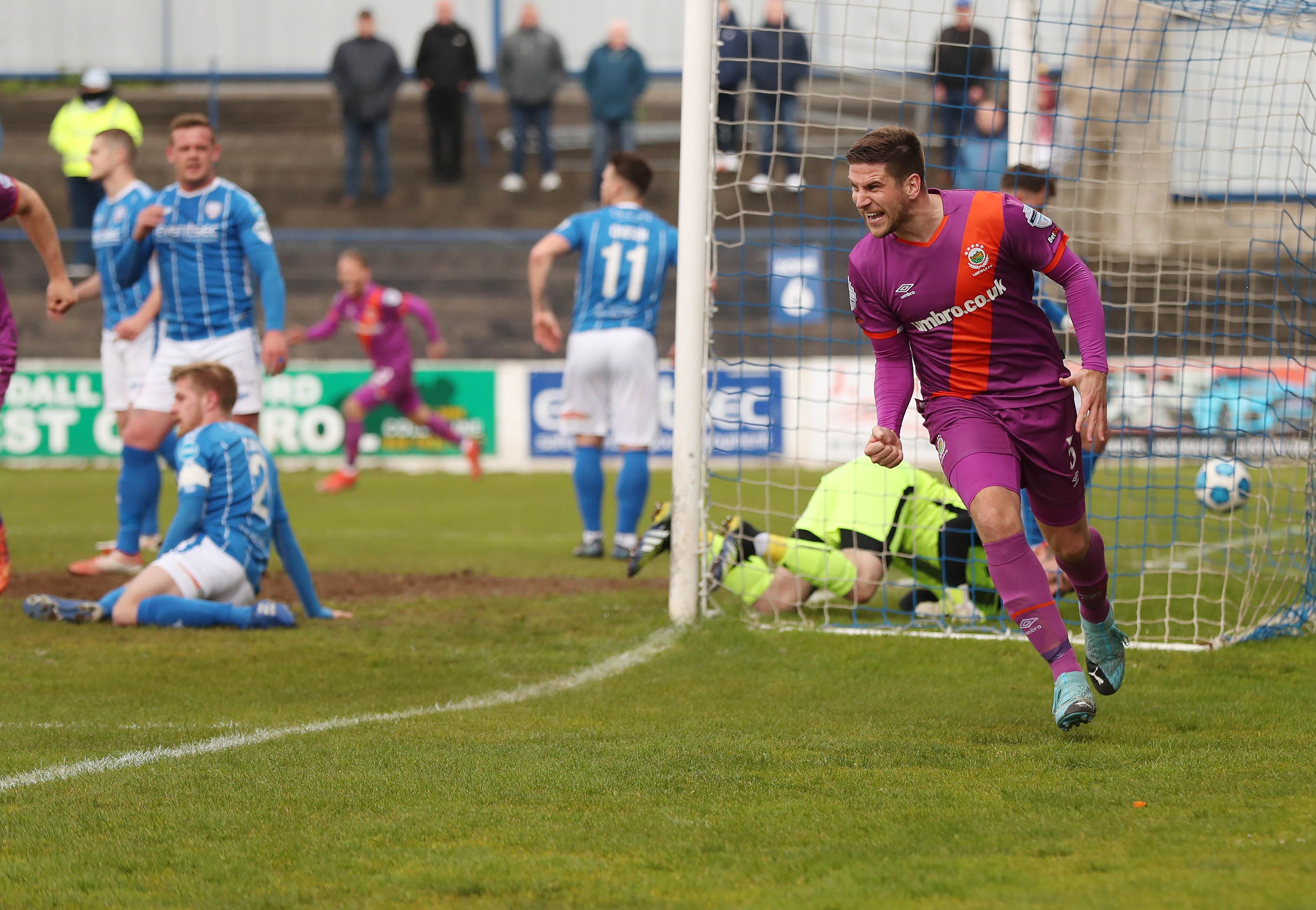 Mark Haughey wheels away after putting Linfield ahead at Coleraine INPHO

LINFIELD wrapped up their 55th league title and secured the double as a 1-1- draw at Coleraine was enough for David Healy's men to retain the Gibson Cup.

The Blues needed just one point from their final two games and they got it at the first attempt against the last remaining team capable of challenging for the Gibson Cup.

They were on the front foot from the off and got their reward on 13 minutes when Mark Haughey headed home after Kirk Millar's corner had taken a touch from a Coleraine defender.

This sprung the hosts to life and Chris Johns was called into action to tip James Mclaughlin's shot over before the Bannsiders had the ball in the net through Curtis Allen, but Allen had turned his home with his hand and yellow-carded for doing so.

Allen then volleyed over from close range but on 36 minutes, he finally made a chance count when his glancing header from Lyndon Kane's cross found the net.

He was unable to put the hosts ahead with a header when he should have done better, while at the other end, Coleraine goalkeeper Marty Gallagher saved from Cameron Palmer and somehow kept Joel Cooper's follow-up from crossing the line as the teams went in level at the break.

Coleraine pressed in the second half but were unable to fashion anything of note for long stages as Linfield held firm. The closest Oran Kearney's side came to the winning goal they needed arrived with minutes to play when Josh Carson let fly with a dipping effort, but Johns saved and the danger was cleared as Linfield held out to secure the title.

"It has been an incredible effort by everyone - the players, the staff, everyone at the club," Healy told the BBC after.

"Right now this feels like the sweetest of all the league titles since I came to manage the club I supported as a boy."

Glentoran secured European football as Conor McMenamin fired home at the back post for the only goal of the game two minutes into the second period to secure a 1-0 win and third place against Larne who are four points adrift going into the final round of games this weekend.

In the race for the last remaining European playoff place, Glenavon are in pole position thanks to their come-from-behind 6-3 win at Carrick Rangers.

Lee Chapman gave the hosts a ninth minute lead and when Jordan Gibson doubled their advantage four minutes after the break, it looked as though it was going to be a disappointing night for the Lurgan Blues.

However, they stormed back into the game with Andrew Hall and Peter Campbell scoring twice in a minute to level before another quickfire double from Campbell and Robert Garrett put them clear.

Chapman pulled one back for Carrick, but Glenavon wrapped it up with Hall striking twice - one from the penalty sport - to complete his hat-trick and to leave Glenavon three points ahead of Ballymena United who enjoyed a 3-0 win at home to Warrenpoint Town.

Shay McCartan and Paul McElroy gave the Braidmen a 2-0 half-time lead with Leroy Millar scoring 15 minutes from time to seal the points and just about keep Ballymena in the hunt for that playoff place.

The remaining game of the evening saw Portadown score a 4-2 win over Dungannon Swifts.

Adam Salley struck on 28 minutes to give the Ports a 1-0 half-time lead, but Dungannon hit back with James Convie and Rhyss Campbell scoring within three minutes to turn the game around.

However, Portadown responded with Lee Bonis equalising on 72 minutes before Salley put them back in the lead and Adam McCallum sealed the win late on.