No margin for error as Ulster host Ospreys 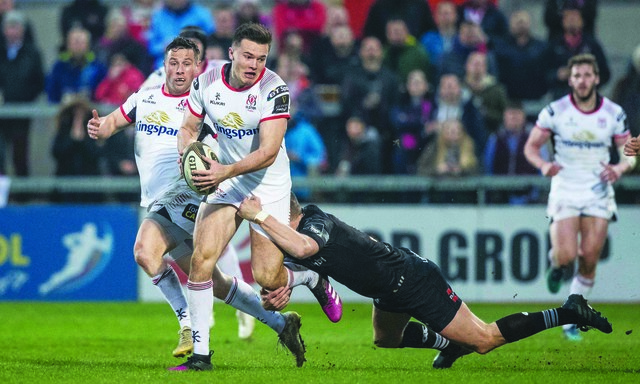 WITH just four games to play and a five-point deficit to Conference A leaders Leinster, Ulster have no margin for error when they host third-place Ospreys at Kingspan Stadium tonight (Friday).

Dan McFarland’s side returned after a five-week break with a hard-fought 19-13 win against Glasgow Warriors last Friday to stay in the hunt for top spot and a place in the final, but did lose a little ground as they didn’t secure a four-try bonus point.

That could have been different has the TMO decided Marcell Coetzee has grounded the ball in the first half, but the reply was unclear whether that was the case.

The South African back row misses out this week having suffered a thigh muscle contusion during the win in Glasgow.

There is better team news, however, with the return of Jacob Stockdale from a knee injury, while Robert Baloucoune could make his first appearance of the season as he has recovered from a hamstring injury to earn a place on the bench.

Ospreys will arrive in Belfast off the back of a 10-0 home win against Zebra on Saturday in a game that was only made safe late on when former Wales and Lions scrum-half Rhys Webb broke for the insurance score four minutes from time.

The Welsh club is out of contention for to spot, but much of that is down to a slow start to the campaign and they have turned that around of late with five wins in their last six games as-well-as two Champions Cup victories before Christmas.

Therefore, Ulster will be tested on Friday and with so much at stake, they pressure is on to hit the ground running and assert themselves from the off if they are to give themselves a chance at claiming maximum points.

“I think if you ignore their game from the weekend - conditions were pretty challenging - before that they had won four on the road in-a-row and won six of their last seven,” said Ulster skills coach, Dan Soper who will move into the role of assistant coach next season.

“If you’re talking about a short-term league, over the last six or seven games they have been one of the top performers. They are a really dangerous side and have really top-class half backs.

“I’m sure if people look at the table, on the face of it, it looks like a straightforward assignment, but if you dig a bit deeper, that’s a good side we’re up against.

“It’s quite a challenge, but we’re back at home where we haven’t played for weeks. Okay, we’re not in front of our fans as we’d love to be, but there is also something nice about being at our stadium and we are conscious we’ve a proud record here we’d like to continue.”

A bonus point win would put a little pressure on Leinster who aren’t in action until Sunday when they host Glasgow before the sides cross swords in what could be a pivotal encounter at Kingspan Stadium next weekend.

There is a sense of each game now being something of a cup final with Ulster realistically needing to maximise their return in each of their remaining fixtures, but as clichéd as it may be, the approach is to take it one game at a time, beginning with the Ospreys on Friday.

“If you crunch the numbers, that would make it pretty close,” Soper agreed when it was put to him that four bonus point wins could be enough to reach the final.

“But when you start focussing too far down the road, then you can lose sight of what’s in front of your face. What is important for us to go out this weekend with 100 per cent focus on the Ospreys and get the job done.

“There is no doubt there are some big games coming after with Leinster and so forth, but those games will mean nothing unless we do the job this weekend.”

With he Six Nations taking centre stage in the northern hemisphere at present, the majority of sides have players missing on international duty.

However, in difficulty comes opportunity and the absence of those players opens the door to others to come in and stake their claim, including academy secondrow Cormac Izuchukwu who came off the bench against Glasgow to make his first-team debut.

“This time of the year you can always see a bit of a shift or a swing and which squads perform the best in this window tend to do the best come cup final time,” Soper accepts.

“We provide ourselves on being top performers in this window and as coaches we enjoy it as other guys get an opportunity. We saw that with Cormac last weekend, so that’s how we see it.

“I’m sure the Ospreys are much the same and see it as an opportunity for the next crop of players to step up as this is the only chance they are getting to play anywhere because of how things are at the minute. We expect our high standards will continue no matter who steps up.”