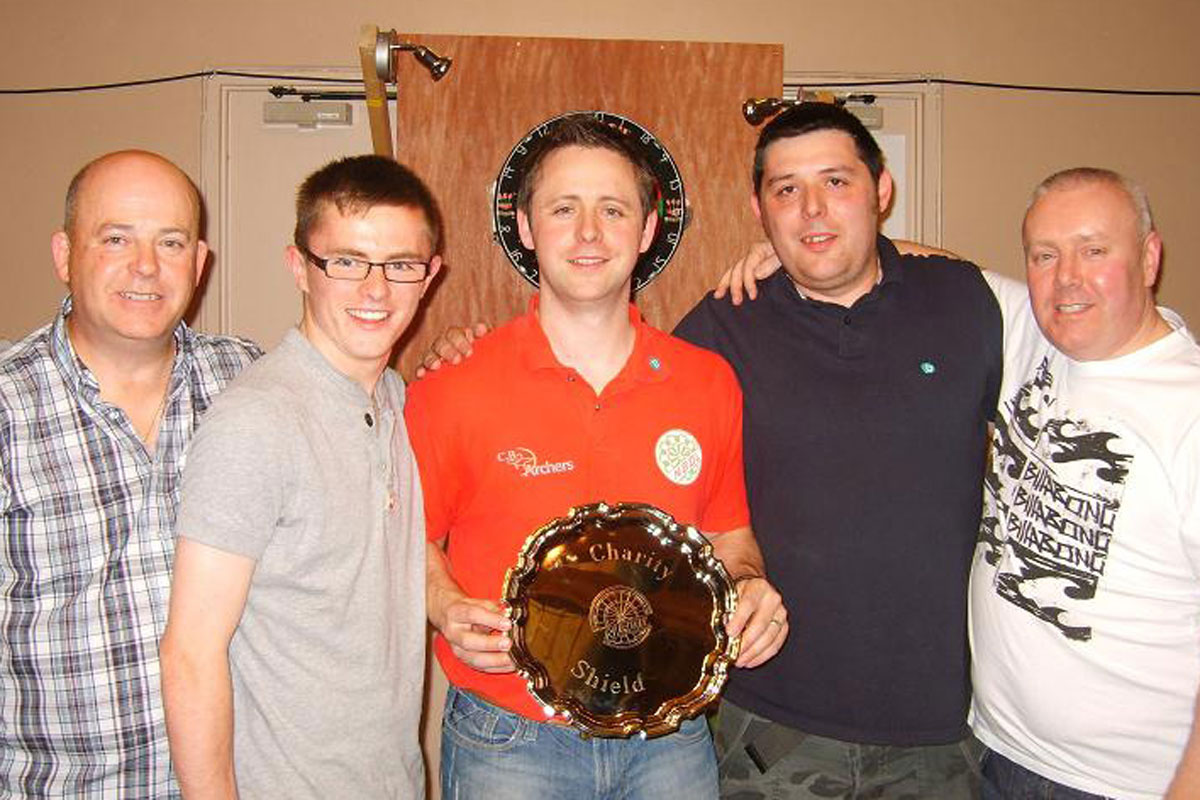 AFTER a summer of slumber the Hunky Dory’s North Belfast Dart League returned for the season opening Charity Shield in the St Malachy’s Old Boys club on the Antrim Road with all monies raised on the night going to the PIPS Charity.

The venue was a hive of activity and every available room was kitted out to accommodate the large entry field, while the one-leg format ensured the competition would be finished on the night.

The first darts thrown in anger came from Keith Beale who got the Shamrock Celtic A team’s campaign started with a ton forty in a good win over John Turley of McGraths Bar.

League Champions the CB Archers had a scare when John Doyle beat new boy Paul McLean to put St Malachy’s Old Boys 1-0 up in their match.

However, solid displays from Kevin O’Reilly Snr, Kevin Mezza and Finton Carson put the Archers through to the next round.

The Front Page eased past the St Malachy’s Amazons 3-1 with wins from Paddy Cassidy, John Rafferty and Kieran Adams of the Front Page and Roisin Walker of the Amazons.

The Ligoniel Working Men’s Club has joined the league this year and they got off to the perfect start whitewashing the St Malachy’s Lancers 3-0 courtesy of wins from Kevin Morrow, Paul Wasson and Seamy Madden. This was followed by The Library Bar B team’s 3-1 success over the Shamrock Celtic B team.

Colly McPeake, Joe McLaughlin and John Smith threw large for the Library Bar and Sean Montgomery was the sole winner for the Shamrock.

The only derby of the night pitched the Phoenix Flames against the Phoenix Bar and it was the Flames who left their mark with wins from Dee Smyth, Vincey Donaldson and Stephen Donaldson while Micky Crangle was the only plus point for the Phoenix Bar.

The last tie of the round was a ding-dong battle between the St Malachy’s Zulus and the Library Bar A team.

Mark McVeigh and Squid McDaid gave the Library bar a quick 2-0 lead but Pol Commin and Marty McDonald drew the match level before a confident Sas McDaid took the decider for a 3-2 score line to the Library Bar.

The second round draw threw up a few tasty encounters and the Phoenix Flames looked odds on for a shock when Ciaran McAlinden put them 1-0 ahead against the Shamrock Celtic A.

However, it proved to be just a blip for the Shamrock and wins for Sean Moran, Brian George and Keith Beale gave them the match 3-1.

The CB Archers’ Paul McLean was making a bid for player of the tournament when he opened with four consecutive tons against the Village Tavern’s Jim Lee.

But somehow Lee won the game for a 1-0 lead for the Tavern. Kevin O’Reilly Snr and Kevin Jnr put the Archers in front at 2-1 before Joe Lee threw a captain’s leg to tie the match at 2-2.

This left Kevin Mezza the ominous task of beating Mark McAuley, which he did, just, to push the Archers into the semi-finals.

The Ligoniel Working Men’s Club built on their earlier win with a 3-0 pasting of the Library Bar B team with Seamy Madden, Charlie O’Neill and Kevin Morrow (18 darts) grabbing the wins.

The semi-final line up was completed after the Front Page muscled to a 3-0 win over the Library Bar A thanks to strong wins from Paddy Cassidy, John Rafferty and Dee Jordan.

The serious business of the semi-finals got underway after an excellently prepared buffet from Roisin Walker and both matches went the distance.

The Front Page was caught in a titanic battle with the Ligoniel Working Men’s Club after wins for Jap Craig and Kieran Adams were matched by wins for Seamy Madden and John Dillon.

The fifth leg was a ton fest between John Rafferty and Paul Wasson, but Wasson was unerring on his double and the Ligoniel men won out 3-2.

Sean Moran and Keith Beale put the Shamrock Celtic A team in a commanding 2-0 lead when they faced off against the CB Archers.

But a stunning 17-darter from Kevin O’Reilly Snr followed by a 20-darter from Paul McLean deadlocked the match at two legs a piece.

The last leg was a contest of youth over experience and young Finton Carson belied his age and threw a great game against 30-year veteran Jim Flanaghan to seal a final place for the Archers.

The Ligoniel Working Men’s Club has put everyone on notice that they are serious contenders this season and they got off to a dream start in the final when Seamy Madden took the opening game against Kevin O’Reilly Snr.

Finton Carson evened the score with a good win over Kevin Morrow followed by Paul McLean’s defeat of Paul Wasson in a tight game.

Next to the oche were Kevin Mezza and John Dillon and although Dillon was giving it his all to keep his team in the competition ‘Big Mez’ had a little too much in the tank and he sealed the first silverware of the season for the CB Archers by 3 legs to 1.

For full results, standings and up to date NBDL information visit the website at www.tnbdl.com.