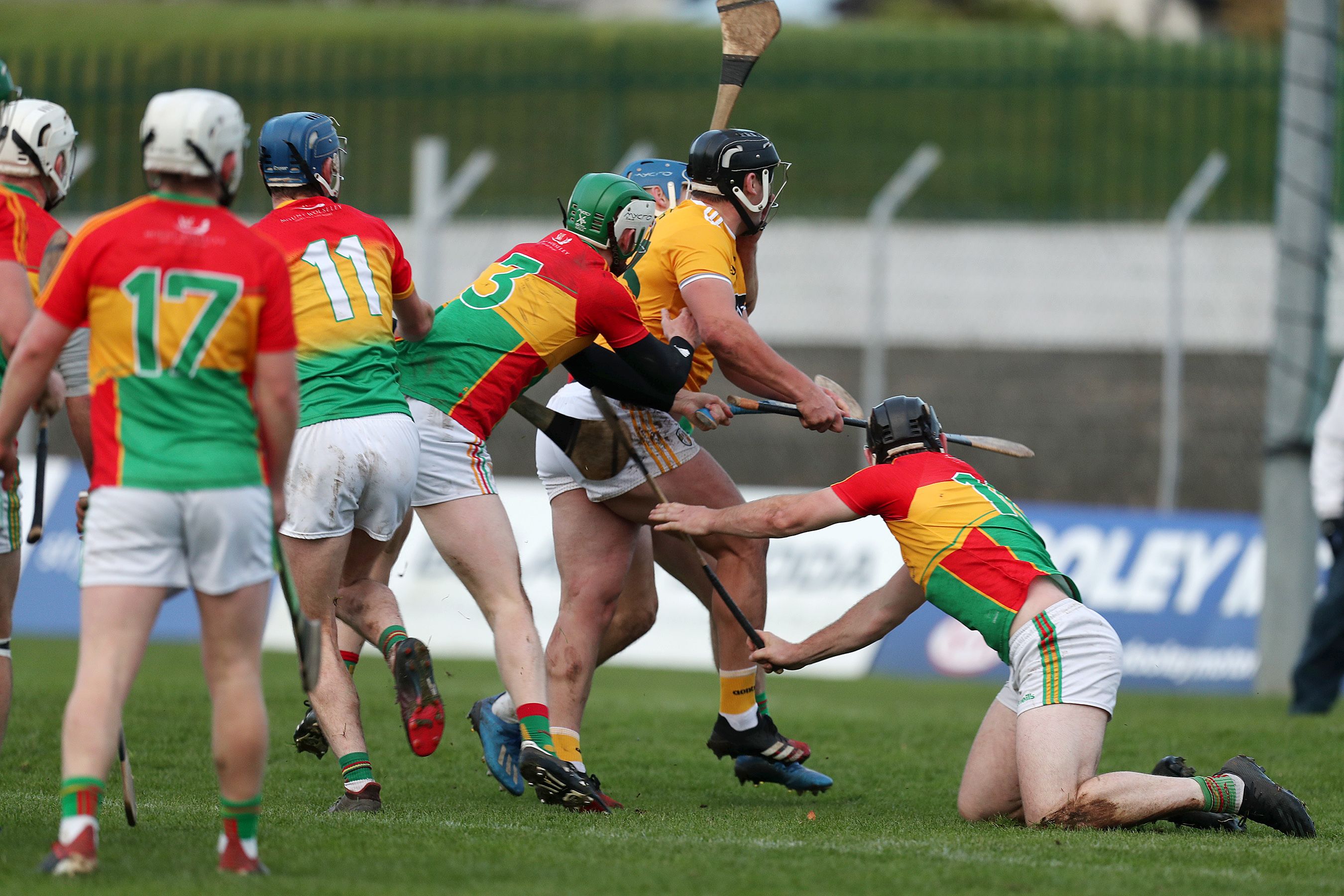 DOMHNALL Nugent struck for a goal deep in injury-time to secure a share of the spoils for Antrim against Carlow on Saturday afternoon.

This was a game the hosts will wonder how they didn't emerge victorious as a powerful second half display seemed to have them in full control and when John Michael Nolan found the net on 70 minutes to cancel out James McNaughton's major, it seemed they were home and dry leading by four.

However, Antrim dug deep and it was Nugent who was the hero as he batted home to level four minutes into added time.

"There is a bit of a reality check there too," said Antrim manager Darren Gleeson, despite being happy with a point.

"What I'm happy with is that they stayed there to the end. They are a gutsy group but hit wides that were unforgivable. We were shooting from outside areas we don't normally shoot from; panicking on the back foot, but fair play to Carlow as they are the people who did that to us.

"In the second half for 20-25 minutes, that's not what we're looking to put out on the field but showed a bit of guts in the end and the lads stayed at it."

Carlow opened brighter with Jack and Martin Kavanagh pointing, but Antrim were on terms thanks to Keelan Molloy and Ciaran Clarke.

The hosts were a little sharper on the heavy ground as they were forcing mistakes and mopping up the breaks around the middle as they began to get on top with another Martin Kavanagh brace putting them back ahead.

Antrim were having to work a little harder for their scores but did hit some fine points through Niall McKenna, Conal Cunning and Keelan Molloy, yet is was Carlow leading 0-6 to 0-5 at then water break following scores from Edward Byrne and John Michael Nolan.

The Barrowsiders extended the gap to three before Antrim struck for their first goal as Ciaran Clarke pounced on a break to run in and find the net.

After Jack Kavanagh and McKenna traded points, the Saffrons were in for their second goal on 22 minutes with Clarke this time the provider as he found Conor McCann who made no mistake.

Again, Carlow responded well and they had some excellent points from Byrne, Kevin McDonald and the pick of the bunch from Ted Joyce out on the left to ensure all six starting forwards for Carlow on the board.

It was the same story for Antrim with Dan McCloskey pointing on the right  but the final say of the half went to Martin Kavanagh whose score reduced Antrim's lead to 2-10 to 0-15 at the half.

Antrim extended their advantage to three on 45 minutes but Carlow were beginning to turn the screw with substitute Chris Nolan proving a thorn in Antrim's side as he clipped over five points in the second period with Edward Byrne's 48th minute goal when being put through by Martin Kavanagh giving his side the upper hand at 1-19 to 2-15 by the water break.

Antrim were wasteful with their shooting in the second half and shot 15 wides overall as two from Nolan saw Carlow three clear when Antrim were awarded a 55th minute penalty after Niall McKenna was trailed back and up stepped Clarke to bury to the net.

Carlow responded brilliantly with four points in a row to leave them as many clear entering the final minutes but Antrim grabbed a lifeline when McNaughton got in on the left to drive to the net.

Again, the hosts replied immediately as Chris Nolan popped to John Michael Nolan on the left and he drilled to the net to seeming settle the argument.

There was to be a twist and after Paddy Burke Brough the gap down to three, Antrim had one last throw of the dice and it was McKenna who did superbly to bear in on goal and get his pass away to Nugent who batted to the net and ensure the sides would share the spoils.

Antrim will enjoy a week off after three tough games in succession before Kerry visit Corrigan Park.

A third victory over The Kingdom this year would likely secure a final berth, but Gleeson is expecting a tough test against a team that has won both their opening games.
"We've Kerry coming again in two weeks' time after a big win against Westmeath so they won't be simple," he warns.

"They have three Kilmoyley (county champions) lads coming back in so it will be interesting to see how they went so that's a big challenge coming down the line."