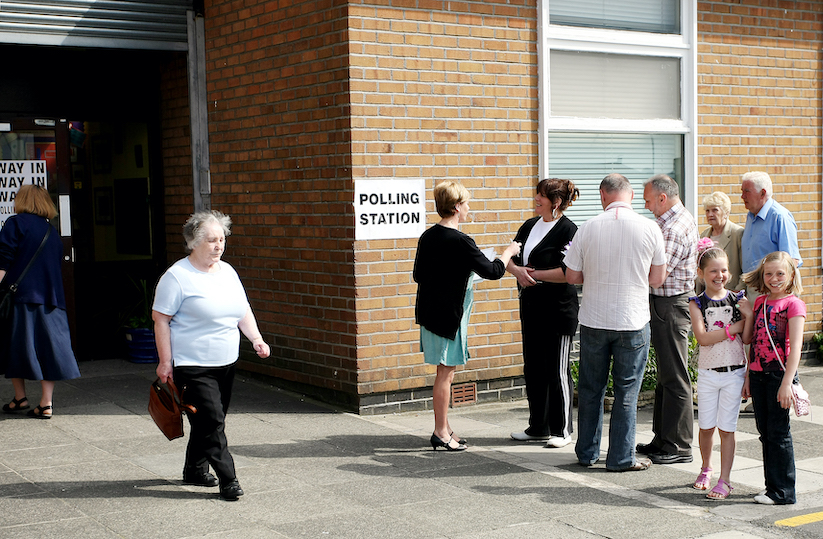 PROTECTING THE FRANCHISE: Electors at St Teresa's polling station at EU election
I DID a Zoom interview last week with Colm Gildernew MLA (yes, Virginia, brother of the more famous Michelle G) on the subject of electoral boundaries.

I’d talked to him about this subject a couple of years ago, so it was interesting to see how this most sensitive of topics had developed since.

To begin at the beginning.

The state of Northern Ireland came into being so that what had been a unionist minority could become a unionist majority, and stay that way to this day.

In addition, gerrymander managed to do an internal carve-up as well,  so that places like Derry which had a population of 19,500 nationalists and 10,500 unionists (yes, Virginia, just double the number of nationalists to unionists), by the magic of gerrymander delivered  twelve unionist seats and eight nationalist seats. Just like that. Similar situations existed throughout many parts of the north.


But then a couple of years back the Westminster government decided to cut back on the number of MPs in the House of Commons, which for us in the north meant there’d be not eighteen but seventeen Westminster seats. Clearly this would need a rejigging of the electoral map, which the Boundaries Commission duly did. Nationalists and republicans looked at the work they’d done and figured, well, okay, all things considered, a reasonable redrawing of the electoral boundaries, given the decreased number of MPs.

Not the DUP. “We’ll see about that,” one well-known unionist MP was said to have muttered, and the DUP promptly drew up its own  new improved electoral boundaries map. Well, improved if you were a member of the DUP, but not if you believed in equity. Because the DUP map sought to undermine the increase of the nationalist/republican population by doing some nifty line-drawing that’d mean a clear benefit to unionism.

So the Boundaries Commission people took away the DUP’s new improved map and studied it. Then they reproduced a fresh electoral boundaries map which was (you’re ahead of me, Virginia) as near as dammit to a replica of the DUP map.

This was challenged in the courts by republicans as clearly pandering to the DUP yen after gerrymander. The case was making its way at snail’s-pace through the corridors of the law when – who’d have thunk it? – the British government decided that its original plan to reduce the overall number of MPs from 650 to 600 and the MP number here from 18  to 17  wasn’t so great after all. So they changed their minds. They’d let the  650 sleeping dog MPs lie, and the 18 MPs here to continue as before. Duck’s off. And that’s where we are right now.


Given our ghastly history of gerrymander and boundary manipulation, if nationalists and republicans are to have any trust in the state here, the redrawing of electoral boundaries must be like Caesar’s wife, beyond reproach.  Yet if we judge by their response to the DUP objection, they are given to lying down and having their tummies tickled, before  obediently producing an electoral boundaries map that suggests they are in thrall to the DUP.

Why Westminster has decided to call off boundary change  is far from clear. But for the present we must murmur a prayer of thanks, because we were heading into the mother and father of all rows. The injustice done to the nationalist people here over fifty years scarred the nationalist/republican psyche. The Boundary Commission for this place is no doubt composed of honourable men and women, but they will need to grow a backbone if this question of redrawn boundaries should come back again. If they don’t stand up to those who’ve never believed in the Good Friday Agreement and who hanker after the good old bad old days,  then they’ll be giving aid and comfort to those republicans who have always believed  the Good Friday Agreement and the Stormont Assembly to be  so much smoke and mirrors. “See?” they’ll say,  “that’s what you get for thinking politics can ever work in this tormented north-eastern corner.”

And their words will contain more than a grain of truth.