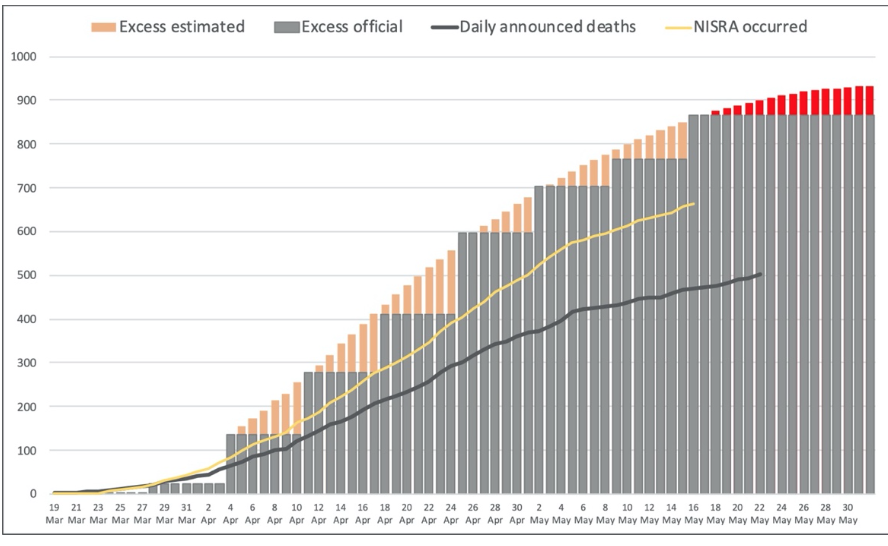 Anyone see BBC Newsnight last Friday (22nd May)? Me neither. But I was tipped off to watch it on iPlayer as there was a package on how the Executive is managing Covid-19.

The opening narrative was that the ‘power sharing Assembly’ (sic) had steered a clear path towards the resumption of contact tracing last week, ahead of Britain. Far more testing had been going on south of the border ‘at first’. A plan to end the lockdown had been agreed but businesses had been ‘left in the dark’ by the Executive on actual timings.

The report gave the impression that the Covid-19 experience has been similar either side of the border and that there is nothing distinctive about public health policy in the Republic. The presenter commented that the ‘human cost of the virus in both parts of Ireland has been similar’. This was followed by a medical expert saying ‘the outcomes seem to be very similar North and South’. The reasons for this, he went on to explain, lie in ‘geography’, ‘population distribution’ and ‘similarities of population’.

Not a scrap of evidence was offered for this proposition. In fact Newsnight was in possession of statistics showing that the total impact of the epidemic has been significantly worse in the North but they chose not to use them. Why?


The suggestion that population density explains why countries have different or similar Covid-19 death rates was debunked some time ago. As Professor Devi Sridah (Edinburgh) says, “Every single person in the world is now affected by this outbreak. How exactly they are affected has more to do with their government’s handling of the virus than anything else.” Substantial differences in death rates are the result of the different things governments do. That’s why we compare: not to make a league table but to learn from one another.

Take testing and the finding of cases. After Britain decided to restrict testing to hospital patients from 12thMarch, the North which was ahead of the Republic fell behind in a matter of days. By 21st March the Republic’s case rate was double the North’s. Two months later (20th May) the Republic’s rate was 494 per 100,000 population, more than double that in the North (235). The latest statistics show that from mid-May, the Republic is still testing at more than one and a half times the rate in the North. Put another way, about 1 in 50 have been tested in the North compared to 1 in 20 in the Republic.

Then there is the all-important issue of ‘outcomes’. Figure 1 shows Covid-19 deaths (cumulative) in the North using all the different measures supplied by the Department of Health (DoH) and NISRA (NI Statistics and Research Agency). The lowest figure, shown by the black line, is the daily figure provided by DoH and the one that is most familiar. The yellow line comes from NIRSA’s weekly count of death certificates where Covid-19 is mentioned as a cause of death.

The highest figure for deaths is shown by the grey columns. These are the registered deaths from all causes that are over and above the expected number of deaths at this time of year – based on the average for the last five years.  As of 15th May the total excess deaths (867) were almost twice the number reported by DoH as confirmed Covid-19 deaths (469).

Some will object that the excess mortality figure includes deaths other than clinically determined Covid-19 deaths.  But public health experts regard excess mortality as the best overall measure of the outcome of an epidemic or other exceptional event. In the case of the pandemic the excess figure is, in Professor Spiegelhalter’s words, “a reasonable measure of the total impact of the epidemic, both the virus and the measures taken against it”.

Minister also updated on testing sites, use of Remdesivir and Clifton Nursing Homehttps://t.co/MZBQNsxeGyhttps://t.co/CQ8k0yAN8E


The Republic does not publish weekly mortality statistics unfortunately, but several academics are now using an alternative source of information as a substitute. This is the online death notice website run by RIP.ie. It has been shown over a number of years that the count of death notices is a close match for the Republic’s official mortality statistics (once Northern deaths and duplicates are removed).

Using data up to 15th May, the total impact of the pandemic has resulted in 30.1 deaths per 100,000 of the population in the Republic and 46.1 in the North. This means the North’s death rate was 53% above the Republic’s in mid-May.

As I write this, the good news is coming through of no Covid-19 deaths in the North today, matching the same result for the Republic yesterday. This will increase pressure on the Executive to ease lockdown measures while conscious of the threat of a second wave if effective community-based testing and contact tracing is not in place. The Executive will continue to be torn between treating the island of Ireland as a single entity for disease control and the policies emanating from Downing Street.

⁦@devisridhar⁩ ‘Every single person in the world is now affected by this outbreak. How exactly they are affected has more to do with their government’s handling of the virus than anything else.’ https://t.co/IleKBR22kp