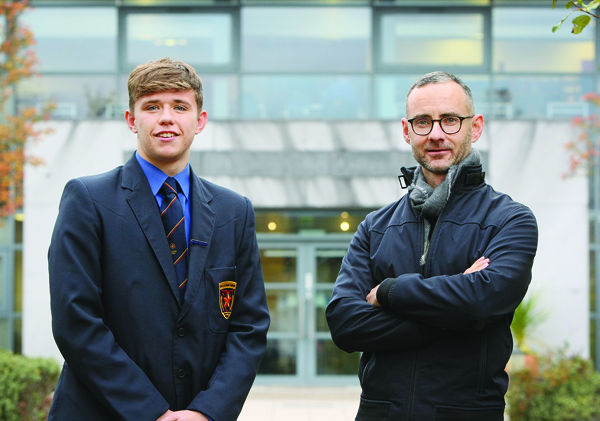 A PAST PUPIL of De La Salle College has returned to the school after almost 30 years to deliver an inspiring talk to students at the school’s annual prize-giving event.

Paul McCrory grew up in Suffolk Cresent, attending the school before gaining a career as Assistant General Counsel and Group Company Secretary of British American Tabacco p.l.c. Last week he returned to West Belfast to remind students of their potential.

“It’s a great privilege to be back, especially being asked to come back to the school, which has obviously undergone a lot of work since I last walked these halls,” he said. “There have been some fantastic improvements in the facilities they provide. The school has always had a strong sense of community, it’s something that was always here and will always be here for a long time.

“I left De La Salle in 1991 and went on to study Politics and Philosophy in Oxford from 1992 until 1995 before going to law college for a couple of years. I relocated to London shortly after where I began my work as a corporate lawyer.”

Reflecting on his journey from first entering the Andersonstown school to becoming a senior lawyer in London – the base of his globetrotting career – Paul said the important message he was hoping to get across to the pupils was they are capable of anything, especially with the support of their school.

“When I came to De La Salle I failed my 11+ exam and at the time it feels like the end of the world, but with the ethos of the school and the teachers who really took an interest in the pupils, me and many others were able to reach our full potential. So many pupils from the school have gone on to do incredible things. The trick is not to underestimate yourself. Life is about taking risks and there are lots of opportunities out there and kids today should go for it.

“People here have a strong sense of community and people who go out to other countries have done remarkably well. It may not be for everyone, but if it is something you’re interested in remember you are capable of doing it, especially coming from the support of De La Salle,” he encouraged.

“I want to thank the school and the teachers for the great experience I had and I wish the school all the best for the future,” he added.