Pipe bomb discovered in West Belfast had ‘potential to kill’ 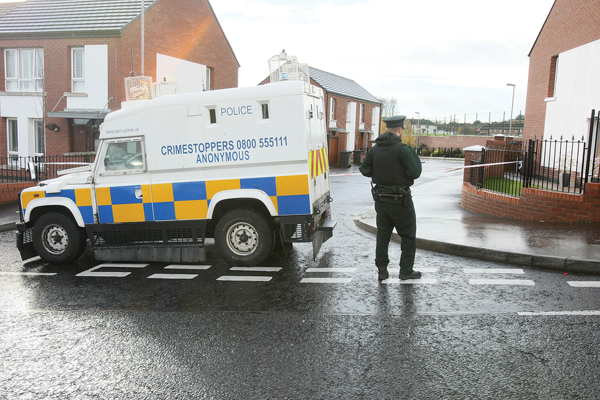 PSNI at the scene of the security alert in Slieveban Avenue

A PIPE bomb that was discovered in West Belfast close to a children’s nursery school had the potential “to kill or maim,” the police have said.

Several homes were evacuated in Andersonstown discovery of a suspicious object in Slieveban Avenue. A PSNI cordon was erected at the entrance to the housing estate at lunchtime as many students from De La Salle College were trying to access the Andersonstown Road for their lunch break. Sinn Féin Councillor Arder Carson who was first on the scene condemned those responsible for the disruption.

“We are being told that a number of homes here have been evacuated and we are led to believe that this is a suspected pipe bomb,” he said.

“I am condemning this reckless behaviour and the effects on the people that live here, as well as the students coming out of La Salle not to mention the fact that Holy Child Nursery School is very close by also. This is a very busy stretch of road with hundreds of homes close by and actions such as this must be 100 per cent condemned,” he said.

Detective Sgt Stephen Gardiner said: "Police would like to thank the local community for their patience while we worked to keep them safe."

He added: "The device we have recovered here had the potential to kill or maim and I would appeal to anyone who noticed any suspicious activity in the area to contact detectives."