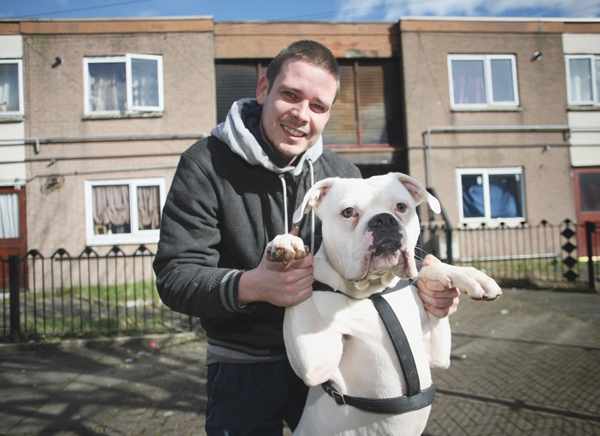 VINDICATED: André with Buster at the end of a very difficult week

POLICE have said they are “disappointed” to learn that a North Belfast man felt they had put his life in danger by reporting a false allegation that he had hanged his dog.
26-year-old New Lodge resident André Perrot was filmed playing with his dog Buster outside his home on Sunday.
The video, which shows Buster swinging from a rubber toy by his teeth, was shared on social media after it was mistakenly assumed that the dog was being hanged.
The PSNI in North Belfast subsequently made a Facebook post to inform the public that investigations were underway following the incident.
Mr Perrot had hit out at the PSNI for reporting the allegation, after a crowd of youths turned up at his home on Sunday.
Responding to Mr Perrot’s concerns, Chief Inspector Kelly Moore said: “Having received reports about a video which had been uploaded to social media about the suspected abuse of a dog in the North Belfast area on Sunday evening, Police immediately began an investigation which included making an appeal for information on our own social media pages on Sunday evening.
“As soon as we were contacted by the owner of the dog on Monday morning, we immediately made arrangements to visit him alongside Belfast City Council animal welfare colleagues.
“Having visited and spoken to the dog owner and satisfied Belfast City Council animal welfare colleagues that the dog was well cared for, in good health and no abuse had taken place, we issued an update to the media and also posted updates on our social media accounts to clarify the matter.
“I am disappointed to learn that the dog owner feels that by carrying out a very quick investigation, resolving the matter and taking steps to ensure the public and media were updated as quickly as possible, that our actions somehow put him in any danger.
“While we have been in contact with the dog owner a number of times to explain how police investigate incidents and appeal to the public for information, now this has been brought to my attention, I will contact him again to discuss this and indeed the other matters which he raised in his interview with you. Suffice to say, it is unacceptable that anyone should feel intimated.
“I would encourage anyone with information, suspicions or fears about any form of criminality to contact police on 101 so we can work with you to do something about it. Alternatively, if someone would prefer to provide information without giving their details they can contact the independent charity Crimestoppers and speak to them anonymously on 0800 555 111.”