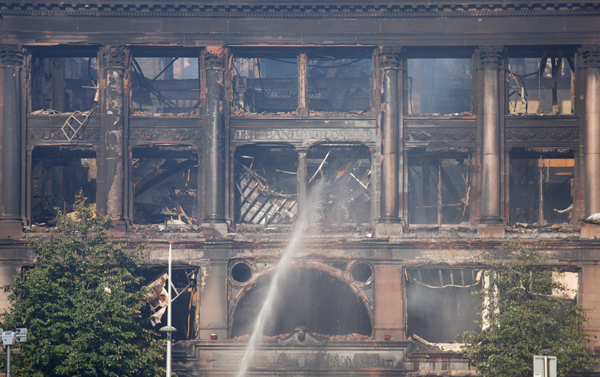 AFTERMATH: The Primark store at Bank Buildings on Wednesday morning

PARTS of the city centre remain closed this morning after an inferno destroyed one of Belfast’s most iconic buildings yesterday.
The Primark store in the Bank Buildings on Castle Street was evacuated after smoke alarms sounded at 11am on Tuesday.
Smoke could be seen billowing across the city as the roof of the 233-year-old building caught fire.
Eleven fire appliances were originally dispatched to deal with blaze, which started on the roof of the building.
Police widened their protective cordon, evacuating Bank Square and Berry Street, as flames engulfed roof and the explosion of gas canisters echoed across the city.
The blaze gutted all five storeys of the building after the roof and ceilings collapsed.
Over 100 firefighters battled the blaze for six hours, but there are fears that building could collapse.
A 45-metre cordon remains in place this morning as fire fighters continue to douse charred remnants of the structure.
Queen Street is closed between Wellington Place and Castle Street, while Castle Street is closed from Queen Street to Royal Avenue.
Buses travelling to and from the city centre are subject to delays and diversions.
The smell of smoke is still thick in the air as ash covers streets beyond the cordon.
Primark CEO Paul Marchant said he was “deeply shocked and saddened by the fire”.
“The safety and wellbeing of our customers, colleagues and construction team is of course the most important consideration and we are truly relieved that all were evacuated safely. We would like to thank the emergency services for their swift response and ongoing actions.
“Our store is housed in an iconic building and much-loved by the people of Belfast.
“We would like to reassure our customers, colleagues and the wider community in Belfast that we are committed to working with the authorities and our building contractors to establish the cause of the fire.
“We are working closely with our team in Belfast to ensure they are fully supported during this challenging period. We would like to thank everybody for their support during this difficult time.”
People Before Profit Councillor Matt Collins, a former worker at Primark, said he is “hugely relieved that no one was seriously hurt in the fire”.
“I spent over five years working in Bank Buildings, alongside some of the best people about the road and I have fond memories of them all,” he said.
“They are the people who made the store thrive as they served the people of Belfast and further afield for decades. When things settle it is crucial that they are not forgotten, and that their jobs and pay are protected and secured for the future.”
SDLP councillor Tim Attwood described the blaze as “devastating”.
“My thoughts are with the staff and the emergency services who are currently battling to control the flames,” he said.