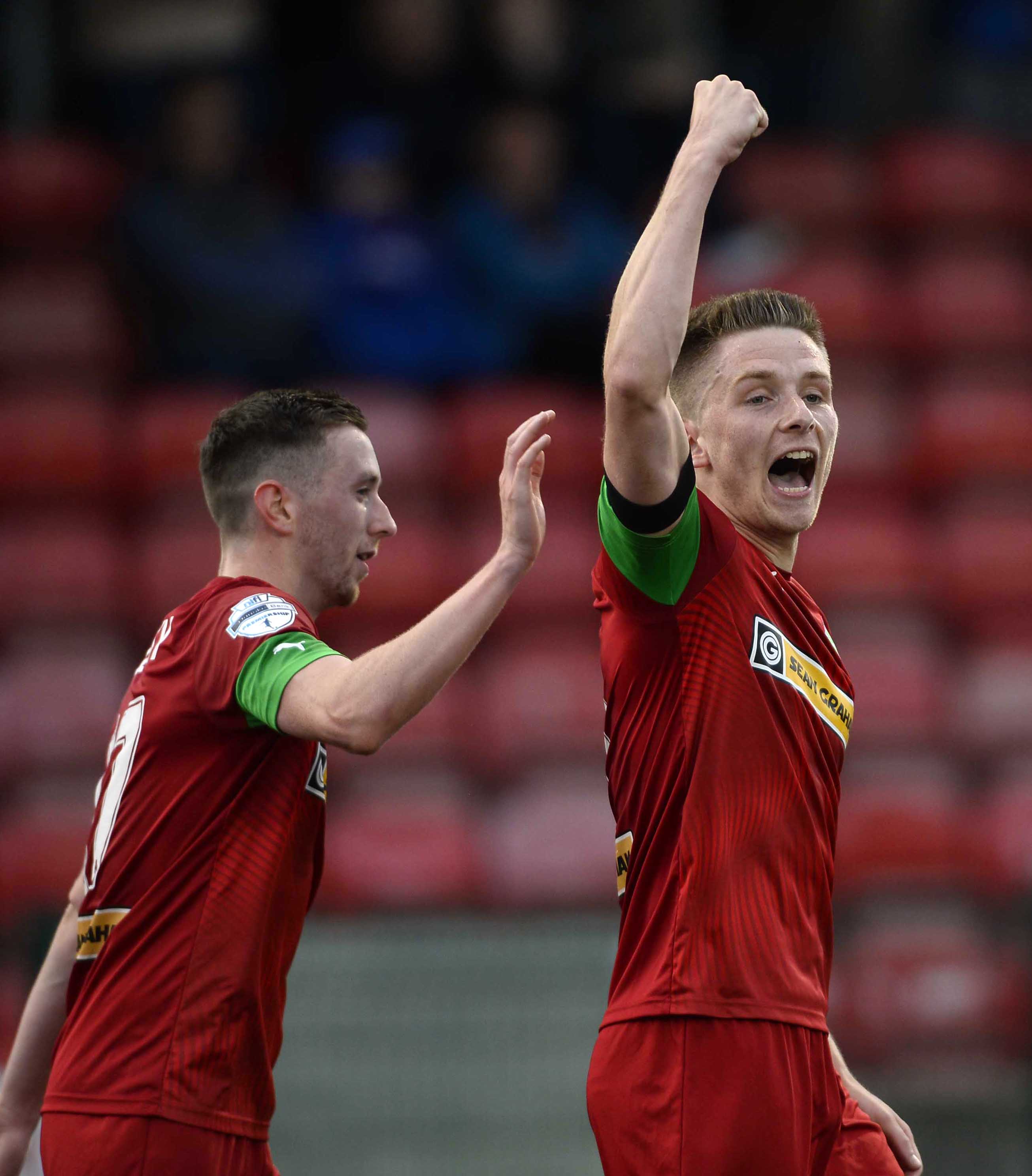 CLIFTONVILLE ended their three-game winless run in dramatic circumstances as Ryan Curran stroked home from the spot with the final kick of the game to ensure a 2-1 comeback win at Stangmore Park on Saturday afternoon.

An Aaron Donnelly own-goal gave the Swifts a first-half lead but Paddy McLaughlin’s men hit back early in the second period through captain Chris Curran.

The visitors were denied on a couple of occasions by Swifts' goalkeeper Sam Johnston and it looked as though the spoils would be shared until referee Shane Andrews pointed to the spot deep into injury-time and Ryan Curran kept his cool to claim all three points to the delight of his manager.

“Any time you score a last-minute penalty it’s a dramatic finish to the game and we’re delighted that we’re on the right end of the it,” reflected McLaughlin.

“The last time we were here we were on the wrong end of it - in the last four minutes we conceded a penalty. It can go for you and against you and when it goes for you you’re delighted. I think it was nothing more than we deserved, the whole second-half was played in the Dungannon half.

“They were there to defend their lead and then had every right to do so, but I thought the response from the players to going a goal down was excellent – the second half especially.

“We challenged them to go and score two goals to win the game and not settle for a draw. It took us until the 47th minute to do that but that’s the challenge that they were set and fair play to them - they went and achieved it.”

McLaughlin handed a debut to new signing Rory Hale at the expense of Joe Gormley for the first outing of the year.

The visitors began the game on the front foot with Conor McMenamin seeing an early effort blocked by Alan Teggart.

Garry Breen glanced over the bar from Aaron Donnelly’s corner before Sam Johnston had to be alert to quell any imminent danger from McMenamin.

Debutant Hale almost produced the goods from Liam Bagnall’s clipped pass, but the midfielder shot wide of the target and a minute later the deadlock was broken against the run of play.

Just before the half-hour mark, a pinpoint cross from Mark Patton caused confusion in the Cliftonville defence and Aaron Donnelly headed into his own net under pressure from Michael Carvill as the Swifts edged in front at the interval.

Joe Gormley was introduced from the bench at the break and a change in formation paid instant dividends for Paddy McLaughlin’s men who levelled after 49 minutes.

Aaron Donnelly’s corner dropped to Chris Curran inside the Dungannon penalty area and the Reds' skipper guided the ball home to level at Stangmore.

The Swifts almost restored their lead as Patton sent a deep cross to the back post where Rhys Campbell saw his effort blocked.

At the other end, Conor McMenamin picked out Joe Gormley with a cross-field pass but the striker's effort was deflected behind at the expense of a corner.

The resulting set-piece from Donnelly was met by Ryan Curran whose goal-bound effort was parried to safety by Johnston, but the move was kept alive as Rory Hale’s attempt fell to Gormley who shot over the bar.

The chances continued to fall for Cliftonville as Gormley volleyed over the bar and Conor McMenamin blazed over from the angle with little over a quarter of an hour remaining.

Substitute Daire O’Connor slipped in McMenamin again, but Sam Johnston was quickly off his line to close down the winger.

With time almost up it appeared as though the sides would share the spoils after another chance went abegging as Ryan Curran floated the ball across the face of goal and Joe Gormley was unable to turn it home.

Two minutes of injury-time had elapsed when Cliftonville forced a late corner from the left, which was hoisted into the area and sent into the path of Chris Curran whose effort struck the arm of Caolin Coyle and referee Shane Andrews pointed to the spot.

Ryan Curran seized responsibility for the spot-kick and confidently rifled home from 12-yards with the final act of the game to deliver all three points much to the relief of McLaughlin who joined in the celebrations with his players at the end.