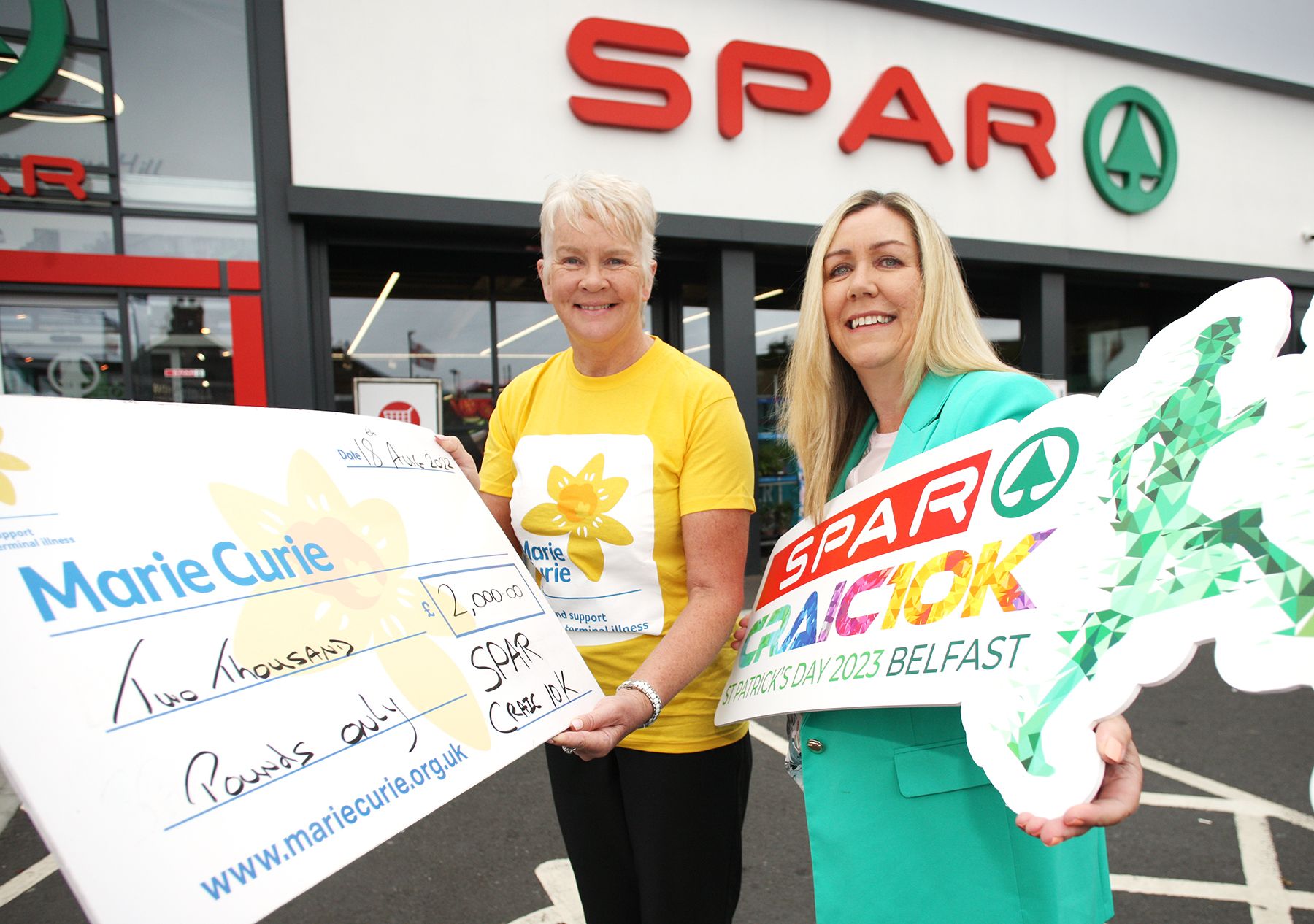 Bronagh Luke, Head of Corporate Marketing at Henderson’s hands over a cheque for £2000 which was raised at this year's SPAR Craic 10k to Anne Hannan, Partnerships Manager Marie Curie

Summer may be gone, but that shouldn't stop us from looking forward to spring and what better date is there in the diary than St Patrick's Day?

Once again, 2023 will see the March 17 festivities get off on the right foot with the now-traditional SPAR Craic 10k and registrations are already open for those who like to avail of the super early bird offer.

Thousands will set off from City Hall as the race gets underway, enjoying the craic and camaraderie that now goes hand-in-hand with the event that will see Belfast painted green on St Patrick's morning, finishing up at Ormeau Park as part of the wider Belfast City Council efforts to create an all-inclusive celebration of the National Saints’ Day.

The SPAR Craic 10k first took place in 2015 and has gone from strength to strength since. The mass run was cancelled on St Patrick's Day itself in 2020 as news broke of the  pandemic but many runners completed a 10k along their own route over the subsequent months of lockdown and earned themselves a collector's item 2020 medal.

A virtual race took place in 2021 as Covid-19 restrictions remained, but it was back in its full glory earlier this year and preparations as well underway for the 2023 editions on Friday, March 17.

In Northern Ireland, large crowds attended the cross community #StPatricksDay parade in Belfast. Thousands also took part in a 10k race which has become a feature in the festivities. pic.twitter.com/uBPvdlemuW

This race is now fully established as one of Belfast's staple events on St Patrick's Day where thousands from the city and further afield set off on a 10k run with craic and enjoyment the main focus of Belfast's premier urban run where everyone is given a céad míle fáilte.

“The SPAR Craic 10K has become the most popular way to start St Patrick’s Day, and we’re delighted to be back supporting the event for another year," said Bronagh Luke, Head of Corporate Marketing at Henderson Group.

“It’s been fantastic to watch the race grow with more runners taking to Belfast City Centre each year. There’s always a brilliant atmosphere, with a route that takes in some of our most incredible sights.

“We’re looking forward to cheering on all runners this year, so whether you’re running for fitness or want to do something for charity, we highly recommend being part of the craic on March 17.”

The super early bird offer of £16 will be available until January 1, 2023, before increasing to £20 until March 5 and £25 until race day, with each entry including a personalised bib, chip, medal and finish line refreshments.

Each registration will see £1 donated to Marie Curie, the SPAR Craic 10k charity partner that received £2200 from last year's event.

Online registration will close on March 12 at midnight after that late registrations can be made by calling 028 90 611916.

Any runners aged 16 or under who wish to run must be accompanied by an adult and a consent form should be sent to organisers by parents or guardians.