Revealed: how the new St Joseph’s church will look 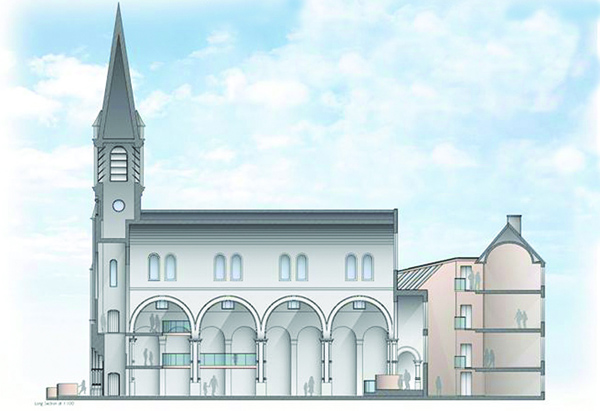 FUTURE: An artist’s impression of the new St Joseph’s Church and Parochial House

AN artist’s impression has been unveiled showing the future plans to restore a former church in the heart of Sailortown.
St Joseph’s church was closed in 2001 after the Catholic Church decided there was no longer a sustainable local population in the Docks area of North Belfast.
The North Belfast News revealed earlier this year plans were in place to transform the building into a Heritage Centre.
Sailortown Regeneration Group (SRG), who took out a 150-year lease of the church, have also managed to secure funding for essential safety work after it was served with a ‘Dangerous Building’ notice by Belfast City Council.
Terry McKeown from SRG said it was important to ensure Sailortown is not left behind when it comes to redevelopment work.
“There is a large amount of development being carried out in the vicinity of the church such as the UU Campus, the motorway/Westlink under-passes and Harbour City Quays 2.
“We must ensure the heritage of the area is included and a historic building is retained for community use in an area with one of the highest levels of multiple deprivation.
“Businesses and communities in the area have given their full support to the project as they would like to see the area revitalised by and for the community. On the artist’s impression plans, Terry added: “The proposed development of the church and parochial house seeks to retain as much of the historic structures as possible, but recognises the need to create viable spaces for community activities and organisations
“The charges and additions will allow both buildings to retain their essential character and dignity, but will allow the spaces within and between them to find new purpose and life.
“Significant emphasis has also been given to using available natural light to create a pleasant and uplifting environment.
“A restored St Joseph’s will greatly benefit the local community by preserving the last historic building in Sailortown and also the wider population of Belfast.”