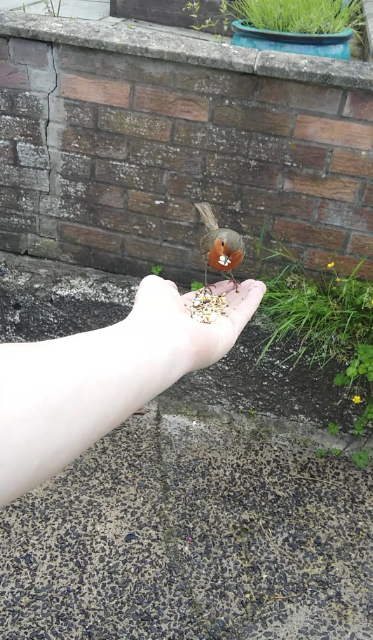 MOMENT OF TRIUMPH: The robin feeds out of Dúlra’s hand

IT’S the pinnacle of Dulra’s career – the payback for a lifetime of dedication to nature. Because no matter how much you devote yourself to caring for our animals, birds and countryside, there’s an invisible border separating us from every other wild thing.

The natural world has learned the hard way to be wary of the planet’s most ruthless predator. We have refused to share the planet with anything that might endanger us (that’s certainly the case in this part of Europe – of course we want to protect deadly animals like lions in far-off places like Africa – it wouldn’t be because it’s only African lives that are in danger, would it?).

Creatures that weren’t so dangerous we killed for food, or just for fun – which we called sport. And so what Dúlra achieved this week was a milestone – and he feels that, although he could be accused of reading too much into it, maybe even it was a small sign of the realignment of the natural order. Because it’s been a long time since we presented any danger to our garden birds. For decades we have fed and watered them, happy to watch them feed on crumbs and more recently on peanuts and sunflower hearts.

We are their friends – but those thousands of years of persecution aren't easily forgotten. Adult birds are quick to show their offspring that people are only slightly less to be feared than birds of prey. But surely a lifetime of caring for birds and presenting absolutely no danger should count for something. And so Dúlra decided to put the garden birds to the test. He’s fed them daily for years now – almost never missing a single day. They gobble up the seed mix and hang on the feeders. But as soon as he moves towards the back door, they scatter to the four winds. The robin, however, was always the exception.

It would dart away with the rest of the birds, but only to a nearby branch or a gate. And it would be first to return to the food, even if Dúlra was still nearby. And then when out gardening, the robin, spideog in Irish, would sit on the spade handle and pop down to gobble up worms – Dúlra got into the habit of leaving a few out especially for his wee friend. Was there a bond forming? Could that seemingly immemorial suspicion between birds and people be broken?

At the start of the summer Dúlra decided to challenge the great divide between man and bird. He gathered up a handful of seeds and stood like a scarecrow in the garden with his hand outstretched. When his arm got tired, weather permitting, he’d sit on the grass – but still the seeds would be on show in the open palm of his hand.

He did it as often as he could. And the robin was always first to react. At times it hopped to within a few feet, its head tilting as it focused a single eye on the mouthwatering feast. But maybe it was a trap. A human hand could close around this fragile creature like a venus flytrap. On the other hand, wasn’t this the same human who seemed to leave out worms? Could he be trusted?

This week, Dúlra’s heart was in his mouth when the robin actually hopped up and into his hand. It grabbed a seed in its beak and disappeared over the hedge where it was feeding its young in its impossible-to-find nest. Dúlra felt like screaming in triumph. But he needed photographic proof. And so he held the camera phone in one hand and the seeds in the other and waited for the robin to return. A few minutes later it was back. It was still suspicious. But after a minute of eying Dúlra up, it flew into his hand once more – this time staying the few seconds required to fill it beak with half-a-dozen seeds.

Dúlra was elated – and now, for the first time, he feels on an equal footing to the birds in the garden. All those centuries of oppression have been relegated to the past. Who’d have thought it – Dúlra literally has a robin eating out of his hand. And he’s never been happier.